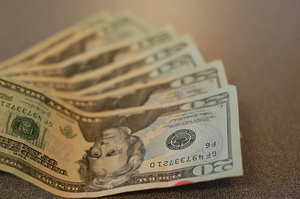 Some people think my family is crazy for not having TV. My husband says, "We have a TV. We can watch a snowstorm whenever we want." That’s because we don’t have any channels.

One time, we rigged up some rabbit ears and tried to get the Steelers game, but much to my husband’s dismay, it didn’t work. Not even a little bit. We live in town and our homes are too close together to get any signal that way.

We sat down, looked at each other, and knew it was probably for the best. Right now, I am a stay-at-home mom. Money is tight, so we can’t afford that bill. We have a mortgage, two student loans, and ever-increasing utility bills. It’s worth it to be at home with my one year-old daughter.

Don’t get me wrong, I do enjoy plopping on the couch after the little one is in bed and zoning out to a good show. After a long day, it’s nice not to have to think about anything. But, during the day, I don’t need that kind of distraction. The way I see it, not having television has saved us money in more ways than one.

First (and most obvious), it saves us $37.99 a month. That’s how much it costs to have some channels around here. I could definitely use that money for something else: more groceries, clothes, Christmas, saving up for a new dryer…

Second, when I am not in front of the television, I am finding ways to earn money. My
communications degree has led me to several free-lance writing gigs,
and I need all the time I can get to brainstorm ideas and query local
publications.

Third, when I am not in front of the television, I am finding ways to save money. When my daughter goes down for a nap, I head right for the computer. I find great ways to save money on sites like this one and MomAdvice.com. I can also check out deals at my local supermarket’s website and fill out surveys on Lightspeed to earn a few gift cards.

So in reality, we are saving a lot more than $37.99 a month. Besides, when I want to chill out after a long, hard day, there is always Netflix!

When Rachel doesn’t feel like being productive ;), you can find her blogging over at Modern Mommyhood.

From Crystal: Just out of curiosity, how many of the rest of you live TV-free? We are almost 99.9% TV-free–our rabbit ears pick up a few channels so if there is some rare major news event we want to watch (say a Presidental election, etc.), we’re able to catch it. Most of the time, though, our TV leads a very solitary life–only being used for educational videos and the occasional family film.

Aside from all the extra time we have, the money saved on a cable bill, and the junk we’re not bringing into our home, we’ve also found we’re less likely to covet if we’re not being bombarded with silly commercials about the latest and greatest products we "must" have.