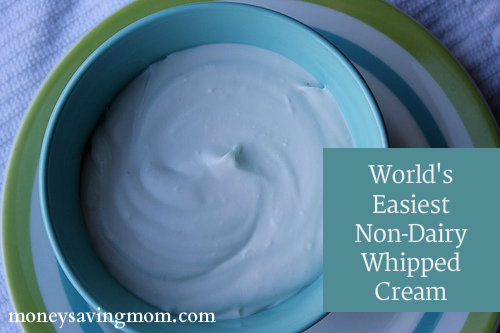 Since one of my children is currently on a dairy-free, gluten-free diet, I’ve been on a mission to find some creative alternatives to things they usually eat that are healthful and yummy. I’ve had a number of flops, but I’ve also hit on a few yummy recipes, too.

Like this Non-Dairy Whipped Cream that I made last week. It’s so simple and easy to make and we all agreed that it was yummy–especially if you can’t eat regular whipped cream!

Put can of coconut milk in the refrigerator overnight. The next day, open it and spoon out into a bowl (it should be somewhat hardened from refrigeration). Add powdered sugar and vanilla.

Coming up tomorrow: The recipe for incredibly delicious Gluten-Free, Dairy-Free Waffles (I’m so excited about these!)