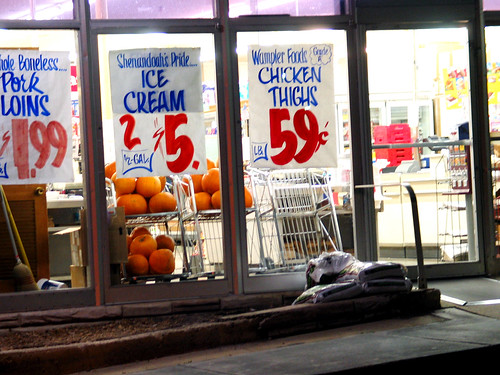 Almost a year ago, I switched my grocery shopping routine from weekly trips to monthly. It was one of the smartest moves I’ve made in my adult life.

It seems counter-intuitive, but it works. Here’s why:

1. It forces you to be intentional and purposeful about spending your money.

Somehow, dealing with a larger amount of money all at once inspires caution, especially when combined with the fact that the food you purchase with it has to last at least four weeks. I am so much better about prioritizing my grocery purchases and focusing on the foods we will actually eat.

When I shopped on a weekly basis, I thought nothing of going over my budget a few bucks here and there. Those few bucks added up to $10-15 in the course of a month, as much as $180 in a year! When your funds are limited, that’s a lot of money to waste. But when I shop monthly, I’m much more aware of what I’m spending, and there are fewer opportunities to over-spend.

3. It allows you to take advantage of the savings found by buying in bulk.

Even though the large jugs of extra virgin olive oil at Costco are considerably cheaper per ounce than any other store in my area, there was no way I could purchase it at the expense of the basic food we needed to keep our tummies filled until the next week rolled around. Now, I can buy a large jug of olive oil one month, and 10 pounds of oats the next month. Each will last at least two months, and I can rotate similar large purchases throughout the year.

4. It makes you more aware of what food you actually eat.

When you refill your cupboards on a weekly basis, it’s very easy to push the new stuff in on top of the old stuff until the old stuff gets ignored for months. But when you go a whole month before re-stocking, it becomes pretty obvious what foods disappear quickly, and what foods tend to stick around for a while.

Having a better handle on what – and how much – your family actually eats helps you to write a more accurate grocery list that isn’t padded with a lot of frivolous items.

The fridge and cupboards start looking pretty bare by the last week of the shopping cycle. That’s a good thing, though: instead of food getting shoved into the dark recesses of your kitchen, it’s brought into the light, prepared, and enjoyed by everyone. Instead of being tossed because it’s past its prime, it’s put to use: thriftiness and frugality at its very best.

6. It helps you save on impulse purchases.

The more often you step into a grocery store, the more money you will spend. It’s just a fact of life. You run in to buy a gallon of milk, and come out with a gallon of milk and five other things you saw on your way. (They set it up that way on purpose, you know.) If you limit your shopping to once a month, you don’t have to deal with that temptation nearly as often.

Now to be fair, I actually still do step inside a grocery store once a week. I spend 75% of my budget on my big monthly shopping trip, and then use the remaining 25% to take what I call “mini trips” each week in the remainder of the month. Those mini-trips are only for re-stocking the fresh produce and taking advantage of any loss-leader sales that might arise.

Oddly enough, the reverse of principle #1 holds true: on the weekly mini-trips, I’m working with such a small amount of money that I’m very careful to spend it only on the things that are absolutely necessary.

Curious about Once-a-Month Shopping (OAMS)? Read my entire series on OAMS here and see if you think it will work for you!

Have you ever tried once-a-month grocery shopping? Have any questions for me?