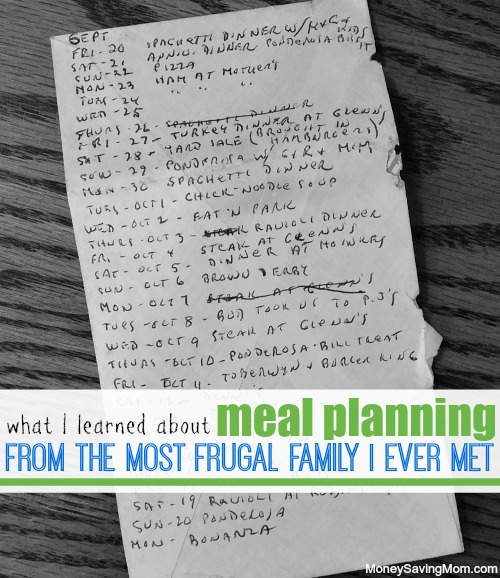 Guest post from Jane who blogs at Jane Saves

Last year, we bought a fixer-upper home from the most frugal family I’ve ever met. Our green Spanish mission-style house was built and paid for in all cash.

The owners then lived in the home from 1977, until they passed away. We purchased the home from their daughter who owned her own home, which she bought in cash too.

This family was not wealthy. They just knew how to pinch a penny before it was even cool.

When we bought the home, it was like walking out of a time machine into 1977. Wood paneling. Yellow bathrooms. Grasscloth wallpaper.

The original homeowners lived by the motto, “If it’s not broke, don’t fix it.” Which is why we were successful in flipping the house. Because they didn’t fix anything. Not one single thing. Because it wasn’t broken.

During our kitchen renovation, we uncovered a few items tucked down into drawers and hidden behind the original cabinetry. The best find was a meal plan from the 1970’s or 1980’s hand-written by the original homeowner, Sarah. (Sarah passed away in the late 80’s, so it was before then.) 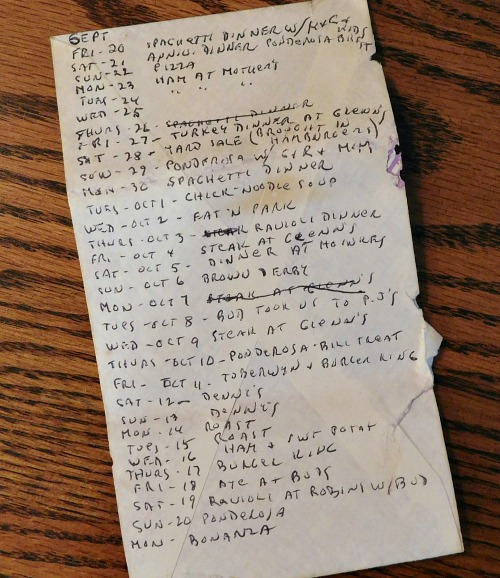 I looked over her simple monthly meal plan again and again. Here are 8 things I learned from her penny-pinching ways.

1. You don’t have to meal plan on a Pinterest-worthy printable or calendar.

Sarah made her monthly meal plan on an old, used envelope. Now, if that isn’t frugal, I don’t know what is! This is proof that you don’t need a fancy form to plan meals for the month. As long as you have a piece of paper and a pen, you don’t have an excuse.

2. Plan your meals for the whole month.

If the most frugal family I know made monthly meal plans three decades ago, there must be something to it.

3. Meal planning is not for people who only eat rice and beans.

When I first started meal planning, I thought I had to plan the cheapest meals possible.

As I started planning more and more, I realized that it’s about so much more than just the bottom line. Meal planning is about reducing stress during the late afternoon rush because you know exactly what to eat and when.

Even if you plan on eating out every night, writing it down on paper gets it out of your head so you can focus on other things.

If Sarah could take the time to write “Burger King” on her menu, you can too.

In between steak dinners and Ponderosa, Sarah sprinkled in simple and cheap dinners, like spaghetti, chicken noodle soup, hamburgers, pizza, and ravioli.

Sarah and her husband may have outgrown the beans-and-rice season of life, but they still knew the importance of saving when possible. It’s all about balance – saving and splurging, steak and spaghetti.

5. Don’t be afraid to eat the same meal a few nights in a row.

There’s no shame in eating a ham or roast several days in a row. In fact, I’ve never cooked a roast and not had leftovers.

The fact that Sarah went ahead and planned to eat the same food several days in a row showed that this wasn’t her first rodeo. She knew exactly what to cook and how long it would last. Because rule #1 to save money in the kitchen is don’t waste food.

6. Plan to be generous if your budget allows.

You’ll notice that she wrote “Bill Treats” (her husband) after dinner on October 10. Even though they were extremely frugal, they were generous enough to pick up dinner for family and friends. Being debt-free is beautiful because you can be generous. Even though they picked up the bill, you better believe they planned and budgeted for it.

7. Plan realistic dinners around your schedule.

I love that Sarah made a note on September 28, that she was going to have a yard sale and grab hamburgers for dinner. Yard sales are hard work. After a long day of sitting out in the sun, nobody has the energy to stand in front of the stove.

This is such an important lesson. There’s no point in scheduling “roast duck” on the menu for a night when all three kids have soccer practice. An experienced menu planner knows that if you don’t set realistic expectations, you will fail. It’s just that simple.

Not only were the original homeowners debt-free, but they lived in one of the most desirable neighborhoods in our area and obviously had disposable income for eating out. Yet they still followed a meal plan.

Meal planning is the number one way to save money and everyone can benefit from it!

Do you want to start meal planning? Here’s a great resource from MoneySavingMom.com to help you get started!

Jane and her family were able to pay off $81,400 in consumer debt in a little over 2 years through a combination of good old-fashioned frugality and flipping a fixer upper. She blogs about saving money in creative ways at JaneSaves.com