A testimony from Keelie of Love Hope Adventure

At the end of 2014, our van developed the habit of leaving us on the side of the road. The first half dozen times we were in the shop, we were in denial about the situation. Once the denial wore off, we made a game plan of how to pay cash for a pre-owned van.

We felt that $10,000 would be enough for a used van. Unfortunately, we had barely been scraping by off of our salary.

We did have about $4,000 in savings… but that was due to extra money I earned back in 2013, and was originally being saved for a potential move.

In 2015, my husband and I both worked to increase our earnings. Since we don’t normally sell our old things, we had to get creative.

How We Earned More

I beat my head into the ground for years trying to find ways to earn money from home. Finally, I broke into the freelance writing market — and while the money I earned writing was meeting our basic needs, it wasn’t giving us the extra that we needed.

The number one thing we did to increase our earnings was to let other people know we wanted extra work. Over many months, we were offered money-making opportunities like:

Both my husband and I were offered ways to earn, because people knew we were looking for work.

Then We Had to Replace Both Vehicles Within a Few Months

After saving for 11 months, we hit vehicle crisis. We were driving home one night and ran into a deer with our van. Thankfully, we were fine, but our van wasn’t. The very next night, we were driving our second vehicle, and it started acting up — turns out that the transmission was starting to go on it.

We immediately started looking and found a used van that was under $9,000. Since we had saved up the $10,000 already, we were able to put the remaining money toward saving for something to replace our car.

Our current car was drivable for a few more months, but one day, we went out to start the car and it wouldn’t work. At that point, we had saved up a total of $5,000, and within a few days, we found a used car in our price range. 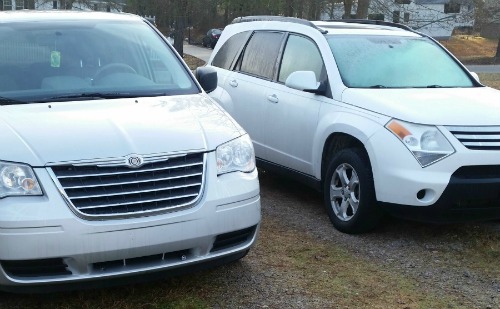 I’ve been very thankful that Crystal has done so much to push us to go beyond just spending frugally. She has encouraged us to find creative income-earning ideas, too. Earning more has made all the difference for us.

Keelie is married to her high school sweetheart and is the mom of three awesome boys. She is a creator and loves sharing with the world around her. One of her biggest passions is to help married couples fall deeper in love with one another. You can read her marriage tips at Love Hope Adventure.