Home » Earning & Managing Money » Living Like No One Else » We Paid Cash! :: Disney Vacation

Two weeks from today my husband and I will be taking our four children to Disney World!

I am a work-at-home mom of four amazing boys ages 7, 6, 3 and 2. My husband is a sales rep for a wholesale distributing company. We have purposed to live within the means that the Lord provides for us and are so thankful for His blessings. With four boys, it requires creativity, sacrifice and sometimes plain old miracles to make that happen!

By the blessings and grace of God, we are debt-free except for our mortgage. We have six months of living expenses saved and are contributing a very modest amount to my husband’s 401K.

With medical expenses and just “life”, vacation has never made it to the top of our priority list. We decided at the first of the year that we would really love to be able to take our boys on a nice vacation and began to ask the Lord if He would allow us this extra but certainly not necessary blessing.

I’m so happy to say, He has allowed us to save all the cash needed without touching our savings or going into any sort of debt! 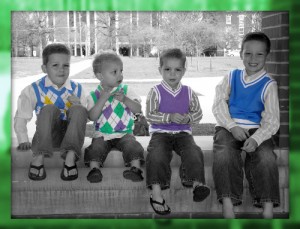 This has been an awesome way for us to teach our children about delayed gratification. We explained each time we had to say no to something that even though we were sacrificing now, the blessing of our vacation was going to be much greater.

We actually saved the cash in a bag so the boys could see it and when we sacrificed something they could see us add to the cash. This has been a great character and faith-building experience!

Brandi Johnson is wife to Brandon and mom to Taylor, Luke, Caleb and Zachary.