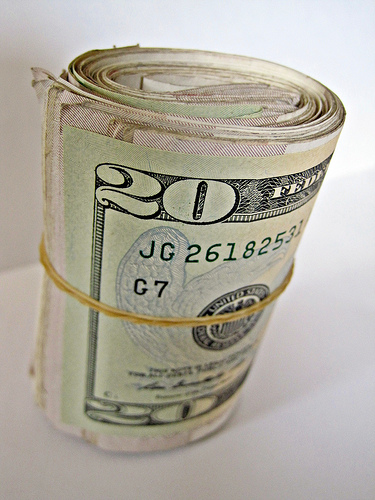 Two days ago, my husband was calling AT&T to see why we’ve been having some issues with our email service. He found out that they are switching over to fiber optic instead of DSL and that’s been the cause of some of the login difficulties we’ve had on our end.

In the process of the phone call, Jesse asked them if they could give us a better rate than what we are currently paying. After a little discussion and back-and-forth, he was able to talk them down by $20 per month for our phone and internet package. (See? It never hurts to ask!)

But the AT&T guy on the phone was smart. He didn’t just give Jesse a lower bundle package price; he also tried to upsell him. “Or, you could keep your current plan and for just $20 extra per month, you can add on a TV package”, he told him.

Now, $20 per month is a far cry from the $70 some people pay for cable, but here Jesse was trying to save money — not pay extra, even if paying for extra meant we’d now have more channels than the three we currently get with if you position the TV just right and don’t move around in the same room while it’s on (no, I’m not exaggerating there!)

You and I are faced with decisions like this almost daily. It’s easy to justify purchases and jump on what might seem like a “good deal”. But just because a price is low or an offer is good, doesn’t mean it’s a good deal for you or me.

For us, paying for TV just isn’t a wise decision. Sure, we might have bad reception on our current free TV plan, but aside from episodes of Duck Dynasty online and The Biggest Loser (quite the paradox there, I know!), we don’t watch network TV.

And truly, we like it that way. (Okay, to be completely honest, there are those moments when there’s a game on and Jesse isn’t able to watch it on one of our three channels, but those moments are far and few between!)

If we paid for our TV — even just $20 per month — we’d feel more obligated to watch it. This, in turn, would eat up time that we’ve chosen to devote to other things: relationships, business projects, reading, and more.

By declining a “just $20 per month” offer, we not only saved ourselves $240 per year, but we also bought ourselves many additional hours of time. And that, folks, is much more valuable than any “good deal” on cable ever could be!

P.S. This post was not written with any intent to make you or anyone else feel guilty if you pay for cable. We all have to pick and choose what is best for our family — and I can’t tell you what is best for yours. But I used it as a real-life example to encourage you to examine those “just $20 per month” decisions in your own life and make sure that they are a good deal for you.