Home » Earning & Managing Money » Get Your Finances in Line in 2009 » Small Bad Decisions Can Lead to Costly Mistakes (AKA: The Day I Ran Into My Husband’s Car) 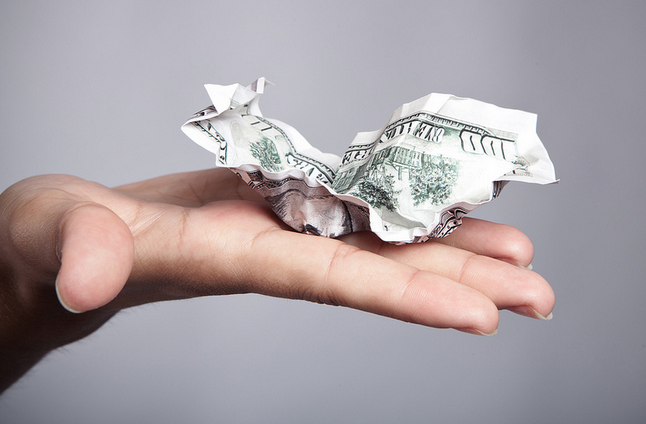 Y’all. Something you might not know about me is that I can be quite brainless.

For some reason, I can handle big details and complicated projects involving dozens of moving parts, but I can be a hopeless cause when it comes to very simple things.

This morning was a perfect case-in-point. I was supposed to meet a friend at the coffee shop at 8 a.m. I was excited that I had gotten up and around early and was actually going to be on time.

I dashed to the car, pushed the button to raise the garage door, quickly started the car, backed out, and then heard a big crunch behind me…

Oh me, oh my! I had hit something while backing up and I knew instinctively what it was — Jesse’s car.

Yikes!!! So much for my good morning and actually getting out the door on time!

Even though I was scared to, I knew I had to get out of the car and go look at the damage that had been done.

I slowly made my way to the back of the car and breathed a huge sigh of relief: it wasn’t nearly as bad as I’d expected. There were a few scratches and dings on his car, but it was mostly my car that had taken the brunt of the impact.

Even then, it wasn’t all that bad: mostly just a large 4-inch crack in the plastic bumper — something that wasn’t too obvious if you weren’t looking for it.

But it was still damage and it was completely the result of my brainless haste and I knew I had to go break the news to Jesse.

I came in the house and, trying to sound as calm and un-alarmed as possible, I hollered up the stairs, “Honey, I’m so, so sorry! I just ran into your car!”

Lest he picture massive damage, I quickly reassured him, “But I promise it’s not as bad as it sounds. Trust me. It could have been a lot worse.”

I was trying to find the perfect balance between expressing remorse and not creating undue panic.

He wasn’t thrilled with this start to the morning, but he was gracious in his response and came down to survey the damage.

I apologized profusely and told him I should have looked in my rear view mirror. It was my haste to get out the door that had caused the accident and my lack of remembering obvious things — like looking behind yourself when you back out of the garage.

The most embarrassing part? This is only the second “accident” I’ve caused and the other one also happened in our driveway. Yep, I told you I was brainless!

When I came home from meeting my friend, Jesse told me, “You know what? I did some calculating and realized that a few simple bad decisions resulted in potentially hundreds of dollars’ worth of damage.”

I gulped at that and immediately started beating myself up for being in such a hurry. But he wasn’t done talking yet.

He went on, “It wasn’t all your fault this morning.”

“But yes it was!” I protested.

“No,” he replied, “You see, the kids were irresponsible last night and left a scooter out in the driveway where I usually park my car. I saw the scooter and, instead of having the kids pick it up, I just parked on the wrong side — right behind you in the driveway.”

“So, we’re actually all to blame.” He went on. “The kids know they are supposed to put all of their outside toys up at night. They didn’t. And I was careless in parking the car right behind you instead of moving the scooter and parking where I usually park.”

A careless move on our childrens’ part plus careless moves on both of our parts all added up to costly damage to our cars. We had a good talk about personal responsibility as a family and we all committed to do a better job to not be careless or hasty in the future.

The good news? The cars are still completely drivable and the damage won’t hurt them in any way, except to potentially lower their trade-in value.

Learn from our mistakes today. Be thorough. Be careful. And don’t be in too much of a hurry. Seemingly small bad decisions can add up to costly mistakes.