Sometimes it’s NOT too good to be true! 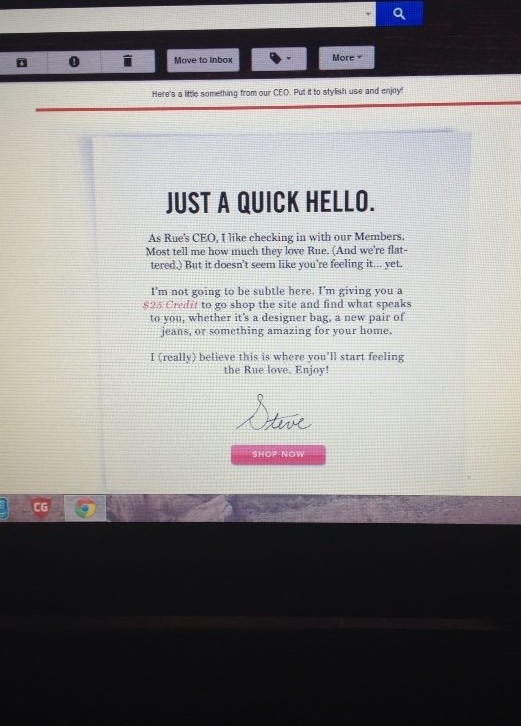 Immy emailed in the following tip:

Everyday I get dozens upon dozens of emails, from all sorts of companies, those I shopped with, entered a giveaway for, etc. Usually I look over the subject line and then click “delete”.

Though one specific email caught my eye in the past two weeks.

Rue La La sent me an email with the subject line stating “A $25 Credit means one thing. Mandatory shopping spree.” At first I figured it meant $25 off a large value… but when I opened the email, it just told me I had a credit. No stipulations!

At first I was just going to ignore it. After all, if I bought something on their site, wouldn’t I have to pay shipping? I decided to go on anyway and look around, mainly to see if I could purchase something in the $15 range and see if the credit would cover shipping.

It did! Plus it told me that once you pay your 9.95 shipping, you ship free for the next 30 days. I bought a Rockflowerpaper “Cassis” Canvas Beach Bucket Bag at $15.90.

Strangely enough it happened again… this time, with The Grommet! I had subscribed on a whim, and a week later I received an email titled “We have a welcome gift for you.” – it was a $10 credit. So I went to the site and looked around.

I had been meaning to pick up a new strainer for the kitchen, and right now on the site is a strainer device called a “silpoura” for $9.95. I decided to add it to my cart and see what shipping would run me. It was only a little over $2.00 — making my checkout total only $2.09!

So going forward, I’ll definitely being paying closer attention to my emails! -Immy