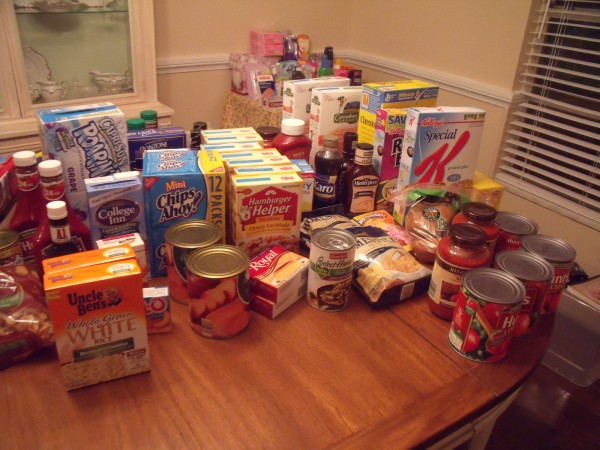 Have an overflowing stockpile or just want to clean out some of your extras before Christmas? Here’s a great idea that Amy emailed in:

Once anyone has couponed for six months or more, you usually find you have a healthy stockpile of items. Recently, I approached my friend Esther about the idea of a Stockpile Swap. We decided on a date, time and location and began to organize this unique event!

We planned our swap on a weeknight, when most people were available. We used many different venues to advertise for the event, such as Facebook, Esther’s blog, and our church newsletter. Each person was asked to bring ten new, unopened grocery, cleaning or toiletry items. We made these terms very clear. We also asked each participant to check expiration dates and double-check that the items had never been opened or used.

Many people brought more than ten items, which just made the selection better. Some people even brought candles, books — all new! I was fearful that we would have many of the same items — mostly highly processed food or way too many Johnson’s Buddies soaps or feminine products. But, I was pleasantly surprised to see such a wide variety of items, and even some organic items. One friend even brought some local honey she had on hand!

We gave each person a name tag with one of four different colors. These colors were used to divide into four smaller groups. Then we established an “order of play”. For example, it went in a rotating cycle of pink, purple, orange, yellow. As a color group would go to the tables, each person could select only one item. We rotated through the same four groups until everyone had accumulated ten items. We then donated the remainder of the items to local needy families.

It was really encouraging to see people go home with ten new items — things they hand-picked and really could use! We also had a coffee table full of coupons that were free for the taking and door prizes to give away.

It was a great night for everyone and something I hope to do every six months or so. It helped me to clear out my own stockpile and select some items that I could use. I left feeling like I’d just scored the deal of the year — for free!

Amy lives just north of Orlando, Florida.  She is a part-time nurse and full-time wife and mother.  She loves to host parties, sew, and spend time with her family.  She blogs about her sewing projects and home remodel at Gabriel’s Good Tidings.