Reader Testimonial: How I Transitioned from Working Full-Time to Part-Time 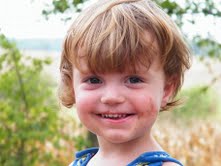 Here’s an encouraging story that Carolyn emailed in:

My husband, Otis and I greeted our new son, Gabriel, in March 2008, when we were 43 and 41, respectively. I was working full-time in a career that I loved, and was happy and content to continue until retirement.

When it came time to go back to work after a 10-week maternity leave, my heart ached with regret and I felt the nudging from God that I needed to be home full-time with Gabriel. I blamed it on hormones and thought, “I am a professional and will be able to deal with leaving my baby at a sitters. I can’t quit my job, I love it!”

The first few weeks were hard, and to my surprise the following months did not get any easier. I began praying fervently for answers, and for the grieving to stop every time I left him to go to work.

In March 2009, when Gabriel was a year old, I knew the Lord was leading me to quit my current job and work part-time. But, before anything else, we had to pay off a couple of loans in order to pay our household bills each month with Otis’ salary.

I had already started using coupons, and regularly read MoneySavingMom.com, plus we have utilized a budget for years. It was time to shave it down, and strictly follow it.

We sat down, made a plan of action to pay off a vehicle and home equity loan, as these were our only loans other than our mortgage. We figured up what we thought I would make part-time and used that for our household expenses, then we applied the rest of my full-time salary to the two bills which totaled $12,000.

In November 2009, we were on track with our payments, but again, God was telling me to set a date to leave my job. After much praying, March 31, 2010 was decided upon.

In early February 2010, both loans were paid off, so I began applying for part-time jobs. By the middle of February nothing was happening, and I was beginning to panic. I finally realized I needed to give it to the Lord because He was the One telling me to take this leap, and by the end of February a part-time job came open (100 hours a month)! It offered health insurance benefits, and mostly night shifts (so my husband could be home with Gabe).

I applied, interviewed, and was hired before my March 31, 2010 deadline. God had provided the job He wanted me to have with reduced hours, nightly shifts, and gave me a paycheck along with health insurance. Boy, He blessed us! God is so wonderful and mighty! Plus, more time with my child is more valuable than any material thing I could ever want want to buy.

Carolyn and Otis have been married for 11 years (this week) and live on 18 acres in Western Kentucky. Carolyn has Weston (20), Otis has James (24) and together they have Gabriel (2 1/2). Otis is a Deputy Sheriff, and since April 1, 2010, Carolyn has worked part-time for the Administrative Office of the Courts as a Pretrial Officer.

Do you have a story to share about your financial journey which would encourage other readers and give them hope? Email it to me and I’ll consider posting it.