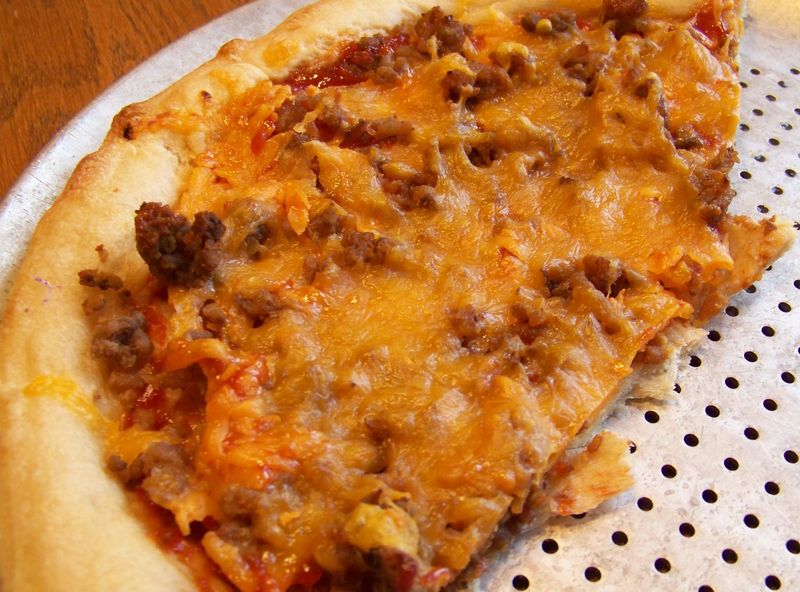 The pizza might not look that bad, but let me tell you, looks can be deceiving!

As you all well know, we've been eating from the pantry this month. We've used up lots of odds and ends, we've tried some new recipes, and we've been eating better than usual because it's inspired me to cook and bake more.

And so far, the challenge has gone on without much mishap. Until last night, that is.

I had planned to make Homemade Pizza–something I've made countless times before. I already had the dough frozen and the meat cooked up, so I thought it would be a snap to pull off.

Well, it spiraled downhill quite quickly.

First off, the dough just didn't feel right when it thawed. Something seemed "off" but I couldn't place it, and I didn't have time to re-make it so I just rolled it out and went with it.

Then, I went to get the barbecue sauce out of the refrigerator and discovered we had used it all up. Oops.

Necessity is the mother of invention, right? So I attempted to replicate barbecue sauce using ketchup, brown sugar, and Worcestershire sauce. Bad idea.

I pulled the thawed browned turkey out of the bag and noticed it also seemed really tough and dry. But I threw it on the pizza anyway along with some cheese. And then I stuck it in the oven without waiting for the oven to heat up entirely–which was also a dumb mistake.

When I pulled it out of the oven ten minutes later, I was congratulating myself on my improvisations and felt so happy that the pizza looked just fine despite the issues which had arisen while making it.

We cut it and starting eating it and I quickly stopped patting myself on the back. While the pizza looked just fine, it tasted awful. The crust was doughy and yeasty, the "barbecue sauce" was icky, and the meat was anything but appetizing.

All put together, the pizza was disgusting. In fact, I'm pretty sure it is the worst pizza I've ever had in my entire life.

We did our best to try and eat a few pieces, but we finally gave up and pulled out some Tyson Any'tizers we still had lurking in the freezer. And we did something we've never done before–we threw the homemade pizza out!

Maybe that seems wasteful, but the pizza wasn't fit for anyone to eat, believe me. However, the flopped pizza was good for something–we all had a hearty laugh over how bad it tasted. And we also were very relieved to remember that the Eat From the Pantry Challenge is almost over. Almost!