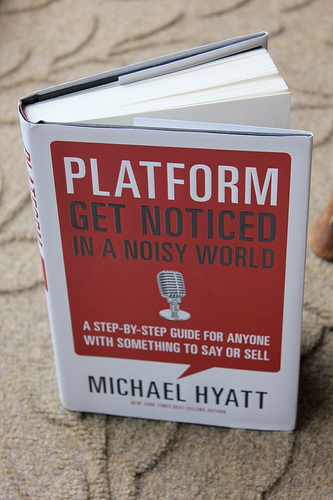 Michael Hyatt is a man who has inspired many — including my husband and me. His posts have provided a lot of fodder for discussions between the two of us, and it’s not unusual for my husband to email me a link to one of Michael Hyatt’s post — even though he knows I already subscribe to his blog! (One of our favorite posts is A Tale of Two Leaders. It’s a must-read.)

I was excited to read his book, Platform: Get Noticed in a Noisy World, as I’d heard great things about it. It’s packed with a lot of fantastic information for anyone who is interested in setting up a blog and it totally lived up to my expectations of it.

In Platform, Michael Hyatt doesn’t just give you the nuts and bolts on how to start a blog, he also shares how blogging can help you build a platform to launch a book, product, or business. I’ve truly seen this to be true in my own life. I would never have been approached with book deals or speaking engagements and other opportunities were it not for the platform that blogging has given me.

And as I’ve seen in my own life, while blogging requires a lot of work and dedication, it’s also much, much easier to build a platform in the age of social technology than it ever would have been before the internet existed.

I appreciated Michael Hyatt’s careful attention to detail and all of the well-thought-out and proven advice he shares. He truly strives for excellence in everything — and I’ve learned a lot from his example. 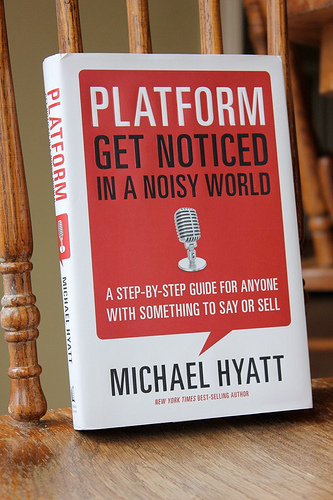 Now, while I thought the book was well-written, I will say that I would have loved for the book to be less of a collection of blog posts and more of Michael Hyatt’s story. He talked some about his story, but the book is mainly comprised of short, bullet-point chapters — many of which read more like blog posts than in-depth book chapters.

In addition, he has some great information on how to effectively use Twitter, but I think he under-estimated the value of Facebook. I’ve made some good relationships on Twitter and I get some traffic from Twitter, but I get a much more significant amount of traffic from Facebook. So I personally think that Facebook deserved more attention in Platform than it received. However, since Michael blogs for a different audience than I do, it’s very possible that he may get a lot more traffic from Twitter than I do.

Despite these critiques, I enjoyed Platform, have tremendous respect for Michael Hyatt, and would highly recommend everyone who is considering starting a blog or currently blogging read his book. No matter your level of experience as a blogger, I think you’ll glean some invaluable insights from Platform.

Have you read any good reads in the past few weeks? Tell us about them in the comments!