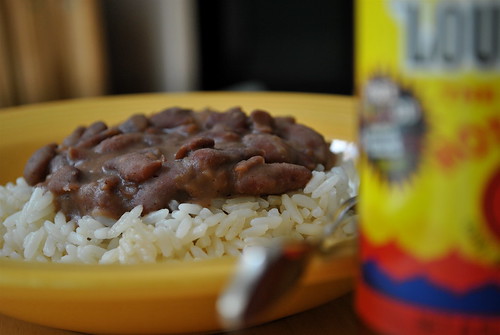 I’ve always said you could eat healthy on a budget, but in February, I decided to actually live out that belief. For an entire month, I decided I would shop, cook, and eat as a vegan. Our monthly budget of $350 for a family of four would stay the same, and my kids would continue to eat some dairy and meat.

Not only did we meet our budget for the month, we actually came $23 under budget! Today I wanted to share with you some of what I learned about saving money on a whole-foods, plant-based diet. Especially since much of what I learned could be useful for any diet.

Start with a Meal Plan.

I began by collecting vegan cookbooks from my library, building a Pinterest board, and finding vegan blogs to follow. At the start of each week, I would come up with 4 or 5 recipes for dinners. I would then turn the meal plan into a shopping list, and add in breakfasts, lunches, and dinners.

Learn to Cook from Scratch.

For the most part, I avoided pre-packaged and convenience foods. Instead, I learned how to make my own foods including almond milk and vegetable broth. Not only did this save money, it was more nutritious.

If you’ve never paid attention to the bulk foods section of your grocery or health food store, give it a chance! It’s a great way to save when you just need small amounts of a particular ingredient (or large amounts). For example, we spent about $1.60 for a decent sized bag of steel cut oats, $0.08 for the fennel seed I needed to make vegan sausages, and about $0.50 for a few dried apricots for a couscous recipe.

My husband and I recently started applying Dave Ramsey’s cash envelope method for budgeting our groceries. Can I tell you what a difference this has made? When you realize that all you have to buy your food is the cash in your wallet, you make better decisions. I found myself filling up my cart with produce and whole grains first. I also found that shopping with cash made me want to choose the foods that were most nutritionally dense and that could stretch our dollar further.

Shop once per Week.

When I limit my shopping to just one day per week, it becomes clearer to me which deals will really benefit my family most, and which I can pass by. Shopping once a week also helps me stick to my meal plan! See how all these things begin to work in concert?

Here’s an added bonus: for the month of February, we spent well under half of what we usually do eating out! Whether or not you are a vegan, I challenge you to implement some of what I learned above into your own routine.

Angela Russell founded her blog, The Coupon Project, in 2009 where she teaches a sensible approach to couponing. She lives with her firefighter husband and two children, Keefe, and Piper, in Tacoma, Washington. She hasn’t gone back to eating meat or dairy yet…