It’s hard to say whether or not this was done in an hour because I broke it up over little snippets of time during the last two days. 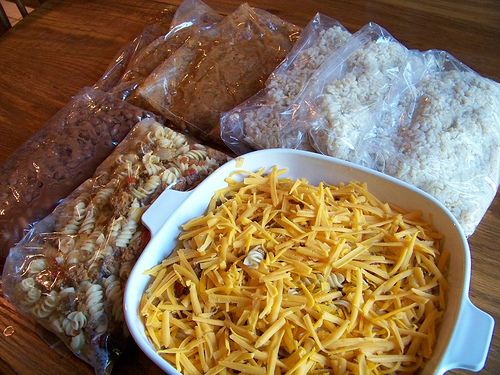 Yesterday morning, before school started, I boiled a big pot of pinto beans, cooked a pot of brown rice, and browned some ground beef.

After school was finished for the day, I made quadruple batch up Frito Chili Pie. We had it for dinner (it was a hit!) and I saved the rest to freeze.

This afternoon, once school was finished, I boiled a pan of noodles, took the remaining ground beef, and made Macaroni & Beef With Cheese. We served one pan for dinner and I froze enough for another meal. I also made two pans of apple chips.

Tomorrow, my plan is to start the Apple Butter in the crock pot early in the day and also, if I’m ambitious, to make a batch of homemade applesauce on the stove. I’ll post pictures of that, if I end up completing it. Sometimes my great intentions don’t end up going very far! 🙂

I’ve found that even just doubling or tripling a recipe I’m already making for dinner and then sticking the extras in the freezer really doesn’t take much extra time. And having at least a few extra dinners on hand in the freezer to pull out and use on busy days can be such a lifesaver!