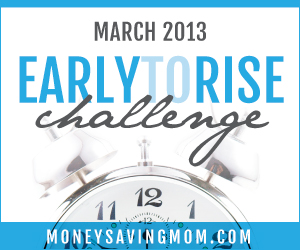 Welcome to the Early to Rise Challenge! Throughout the month of March, I’m challenging myself and my readers to make the most of their mornings. So every week day morning at 9 a.m. EST, I’m posting a short Early to Rise post. I’ll share a few of my thoughts on the day’s passage from Early to Rise, tell you what time I got up that morning, and encourage you to leave a comment to tell us what time you got up and how you’re doing on the challenge.

Andy talks about the lost art of quietness in today’s Early to Rise passage. Truly, this is one of the main reasons I get up early on a regular basis: because I savor that morning quiet.

It’s when I think, read, pray, plan, write, breathe, and dream. When I begin the day with quiet, the whole day feels calmer.

If you don’t have the ability to enjoy at least a few minutes of quiet in the morning, can I encourage you to find time elsewhere in the day for quiet? Maybe it’s when you’re commuting to work, or while your kids are playing outside in the backyard, or before bed.

Whenever it is, make a practice of finding white space in your day. It’s not healthy to fill up every nook and cranny of your day with to-do’s. That’s a way to suffocate, stifle, and exhaust yourself.

Breathe. Soak up the quiet. Savor the stillness. Even if it’s just for two minutes.

How are you going to make time for quiet today? Share your thoughts and ideas in the comments.

What Time Did You Get Up This Morning? 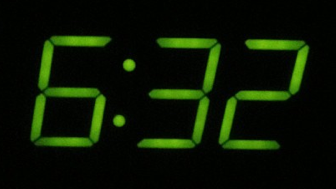 I got up at 6:32 a.m. — not quite so “early to rise” as usual, but I’ve determined that regardless of what time the clock said when I got up, today is still going to be a great day. 🙂

What time did you get up? Leave a comment and let us know!

Join in the Chatter!

Want to blog about this challenge? If you’re blogging through this challenge with me, be sure to leave your link to your direct post for today below. Plus, if you’d like to post your daily posts to the Early to Rise Group Board on my Pinterest page, just shoot me an email (moneysavingmom @ gmail dot com) and I’ll invite you.