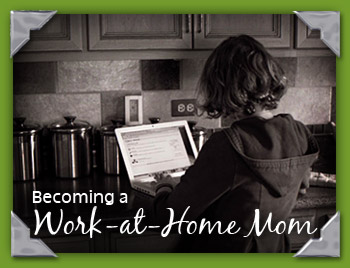 Last time in our Becoming a Work-at-Home Mom series I shared how I had to stop working as a mother's helper due to my pregnancy and while that was a huge cut in our income, it also was what lit a fire in my belly to learn everything I possibly could as fast as I could about earning money from home.

I began with small things, like taking surveys, mystery shopping, getting paid to read emails. Once I became proficient in those, I started scratching my brain for more ideas.

I spent hours writing up advertisements to place in homeschool newsletters and had visions of at least 40 children signing up. I excitedly strategized how I could break the classes up and handle a large number of children and I eagerly calculated numbers and was expecting a good earning potential from these classes. All in all, I was stoked.

Problem was, instead of 40 children signing up as I'd hoped, only 4 signed up. So much for my big plans!

Needless to say, the turn out was very disappointing to me. I thought God had clearly directed me to do these classes and I was confident He was going to bring dozens and dozens of children to them. I worried about how on earth we were going to pay our bills since my big idea had pretty much totally flopped. I wanted to quit and throw my hands up in despair. But I couldn't because I'd already made a commitment to teach these children–all 4 of them–and I had to see it through.

When I look back at those classes and the measly four sign-ups, I realize that not only did that experience prepare me for some greater failures I'd have on down the road, it also taught me that it's okay if things don't turn out like we are expecting. We can still carry on and do our best whether we have four students or forty students or 400 students. Whatever the outcome of our efforts, what matters most is that we give it our best.

I've slowly learned over the past few years that failure of some
kind is inevitable when you have your business or are trying to start
working from home. Everything just isn't going to turn out exactly like
you expected. In fact, much of the time, things will be a lot harder
and a lot less successful than you planned or hoped or dreamed.

Contrary to what I thought in the beginning, I've come to realize that failure is my friend. I've learned much more through failure than I have through success.

The creative writing classes were only the start of my flopped endeavors and learning through failure. Next time, I'll tell you about a much bigger work-at-home failure and how it turned out to be one of the best things which ever happened to me.