I went to two different grocery stores on our last trip to South Africa — Pick N’ Pay and Woolworth’s.

Both we located in local malls in very affluent parts of Pretoria, South Africa. (Yes, they have grocery stores at their local malls! You can not only do your regular shopping, but then also your grocery shopping.) 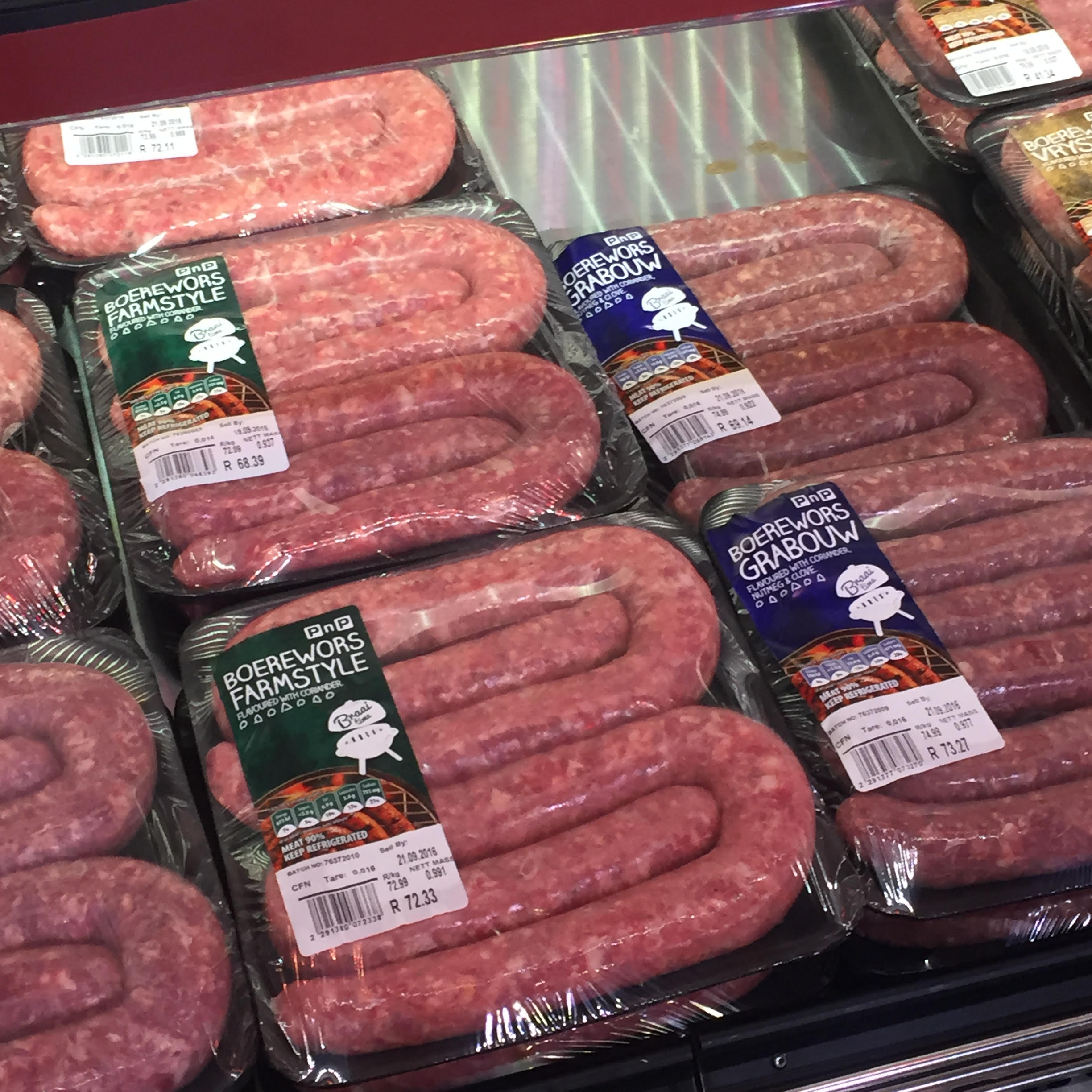 I’ve been to multiple grocery stores in South Africa on past trips, so this time, it felt a lot more familiar and I had fun going through the aisles and taking pictures of various items that you likely wouldn’t find at a regular grocery store in the US. 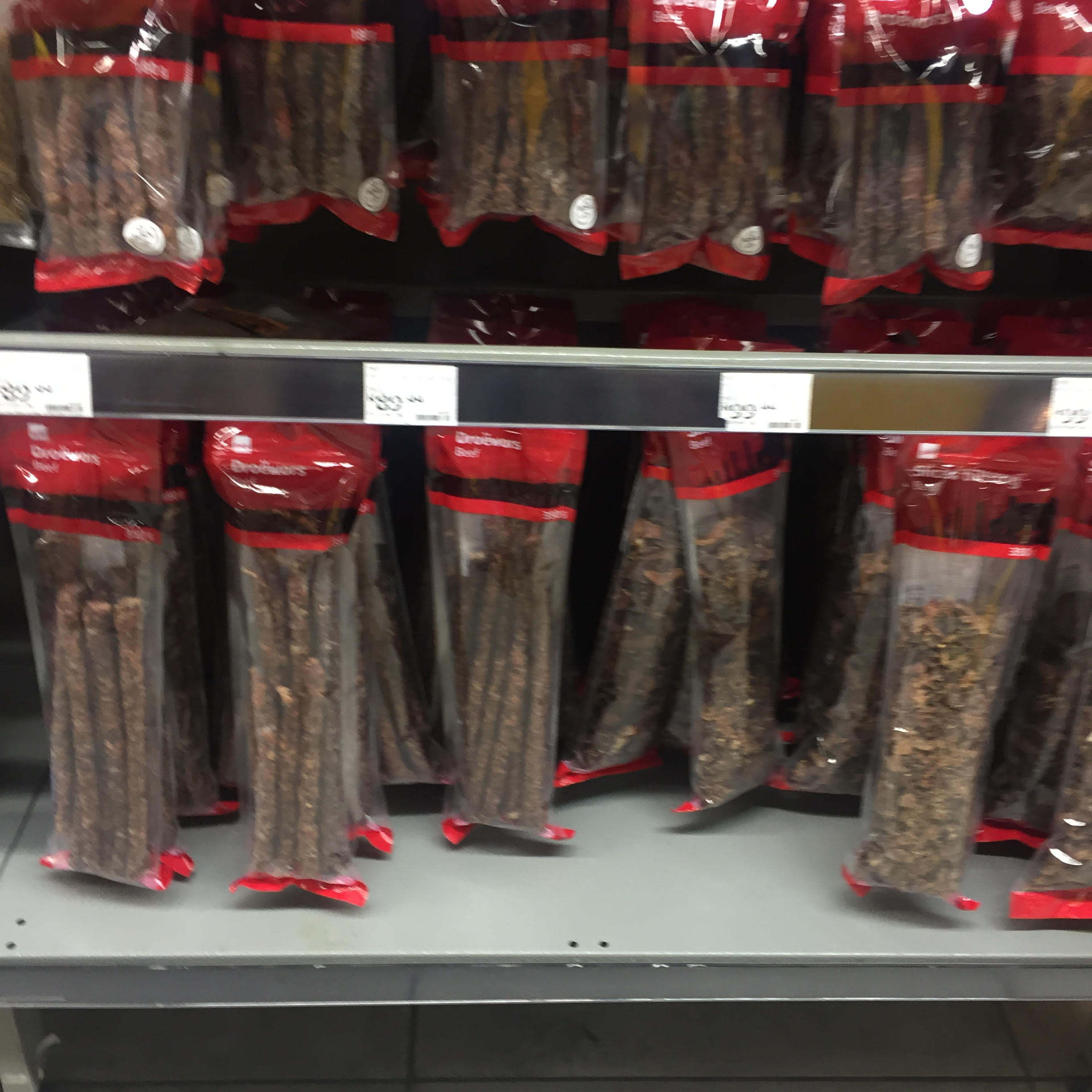 Biltong is something you see (and are served) a LOT in South Africa. It’s similar to beef jerky, but it tastes very different as it’s often not beef and it’s processed in a much different way. Read more about it here. 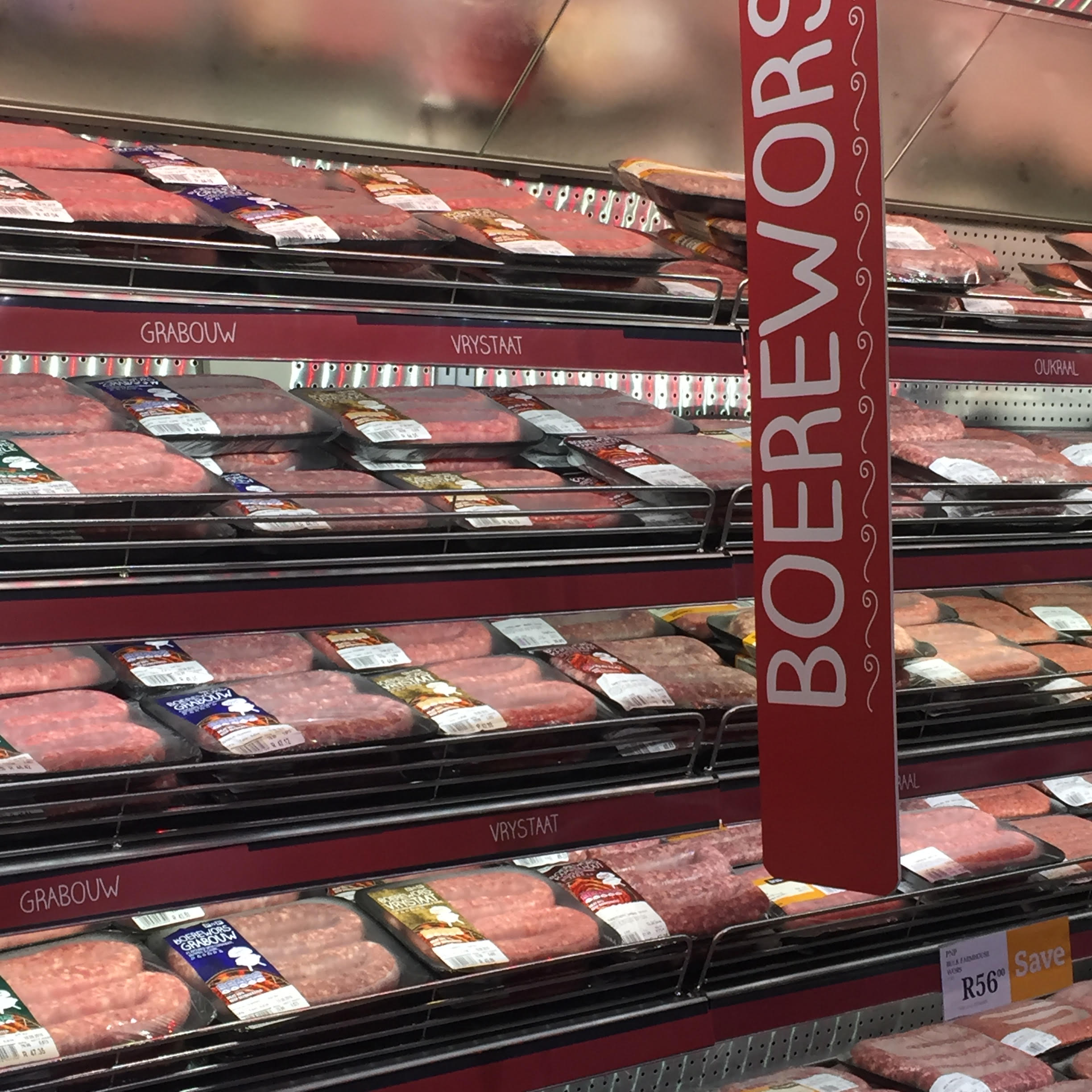 Boerewors is a type of sausage that is very common when the South Africans have a braai (what we’d call a barbecue or cookout). Here’s more about it:

The name is derived from the Afrikaans words boer (“farmer”) and wors (“sausage”). Boerewors must contain at least 90 percent meat – always containing beef, as well as lamb or pork or a mixture of lamb and pork. The other 10% is made up of spices and other ingredients. 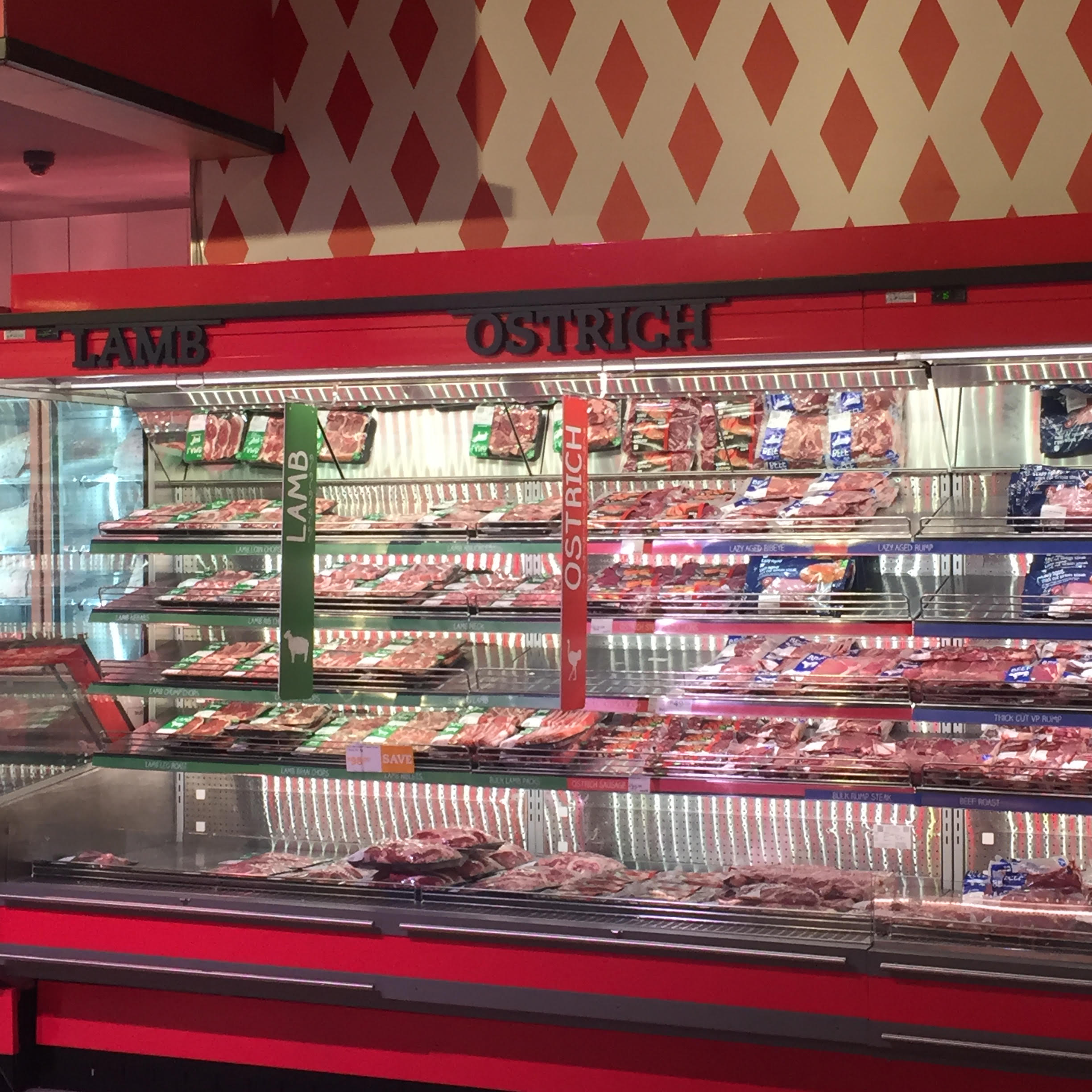 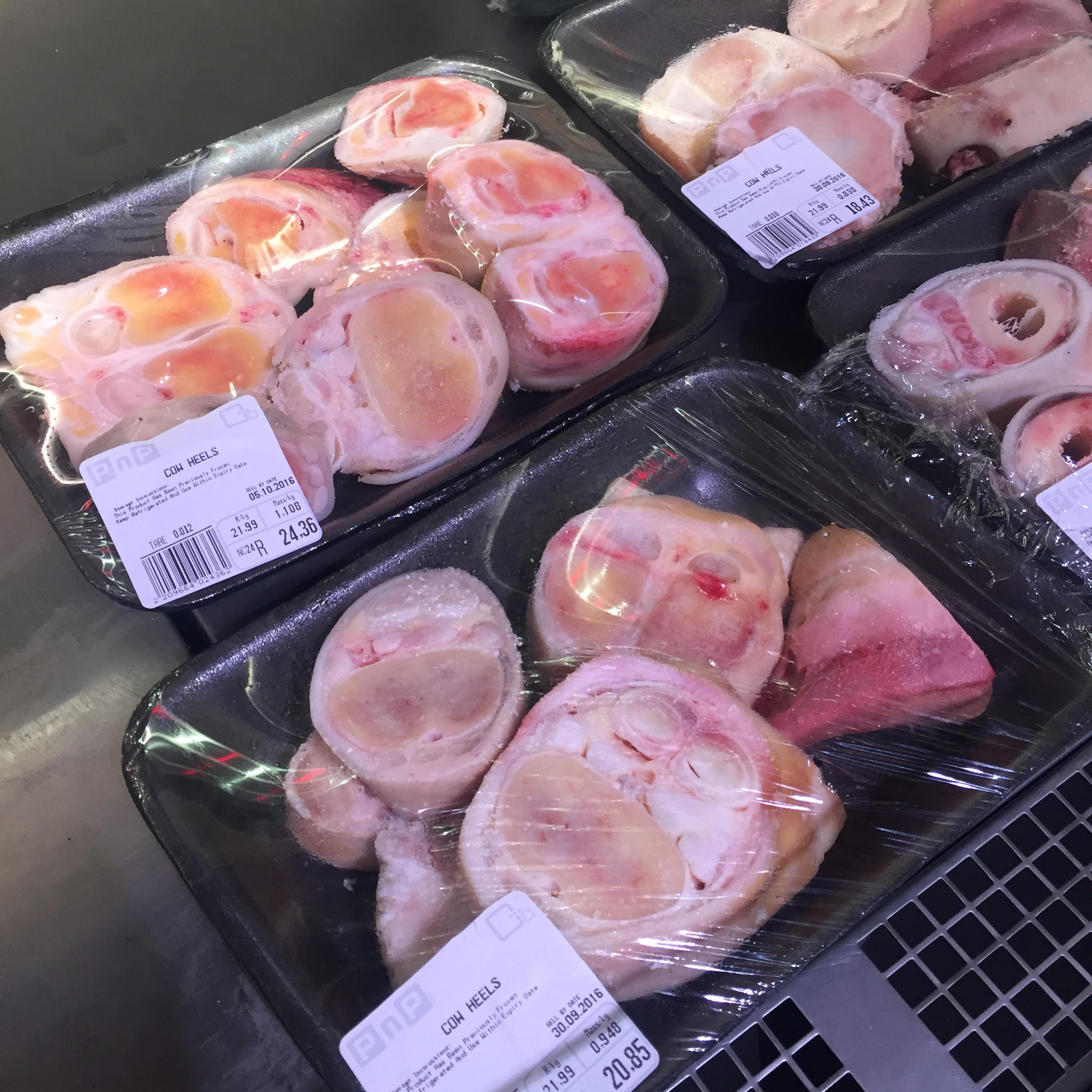 Unlike everything posted above, I haven’t actually eaten these, but I just had to share this picture because, Cow Heels! Have any of you ever seen these at a local US store before?? I certainly haven’t! 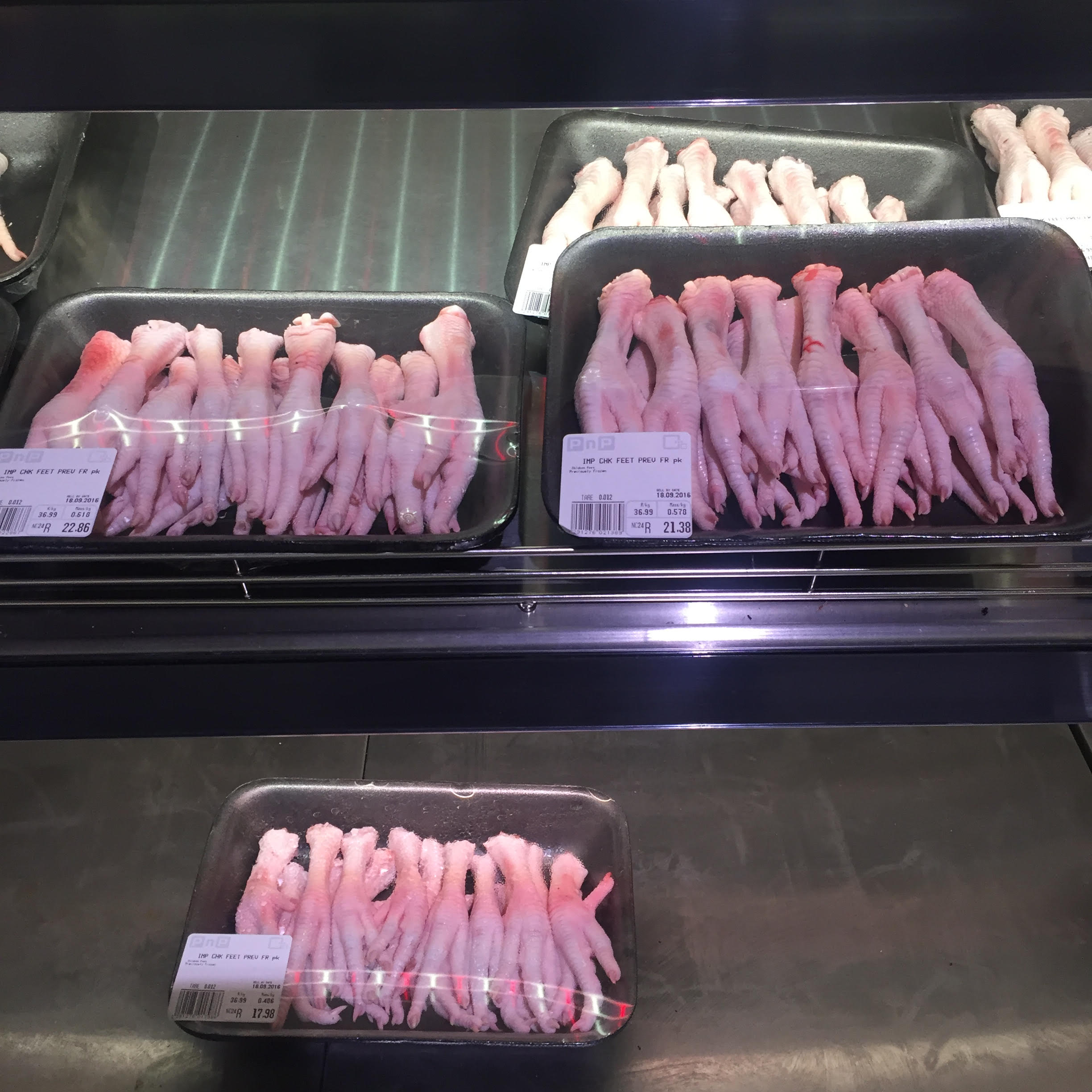 Chicken feet and chicken beaks are a very common meal — especially in the more rural areas. They call them Walkie-Talkies. 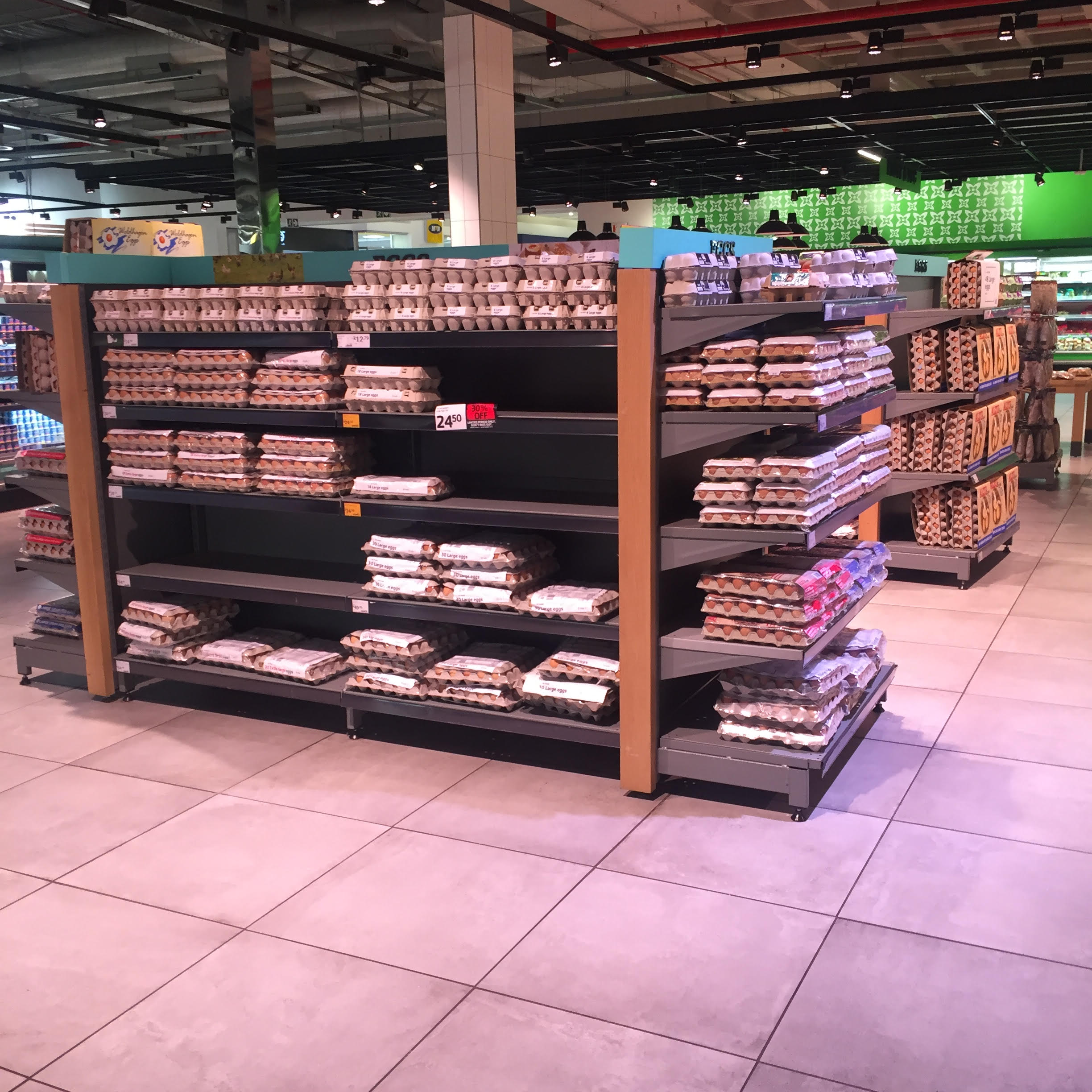 Did you know that America is one of the few countries that refrigerates eggs? It’s so weird to see them all sitting out on a shelf like they are loaves of bread… but I’m sure the rest of the world thinks it’s weird that we keep ours in the refrigerator.

You can read this article here for more information on why we wash and refrigerate eggs in the US. 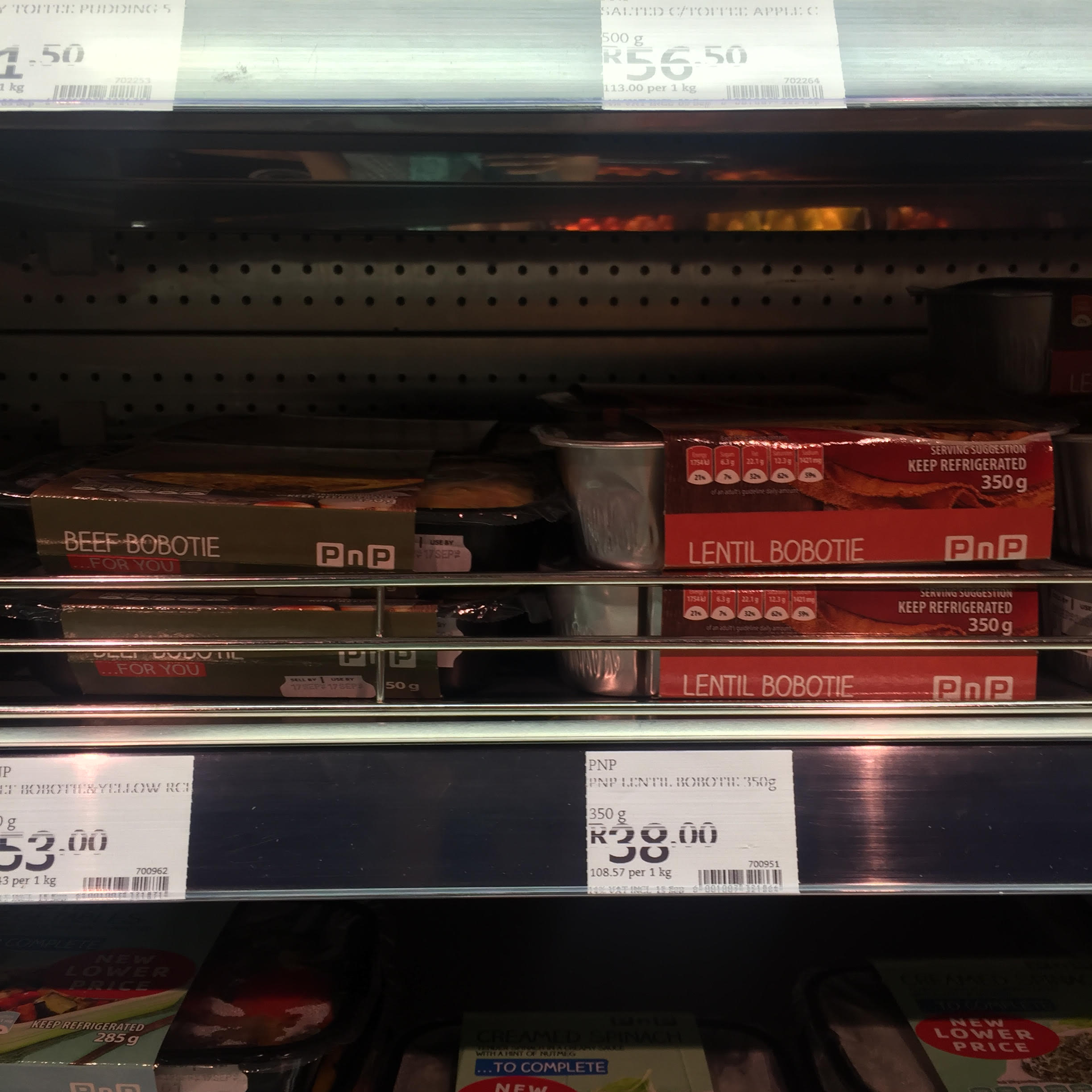 Bobotie is a South African dish of minced spiced meat with an egg-based topping. It’s really yummy! Read more about it here. 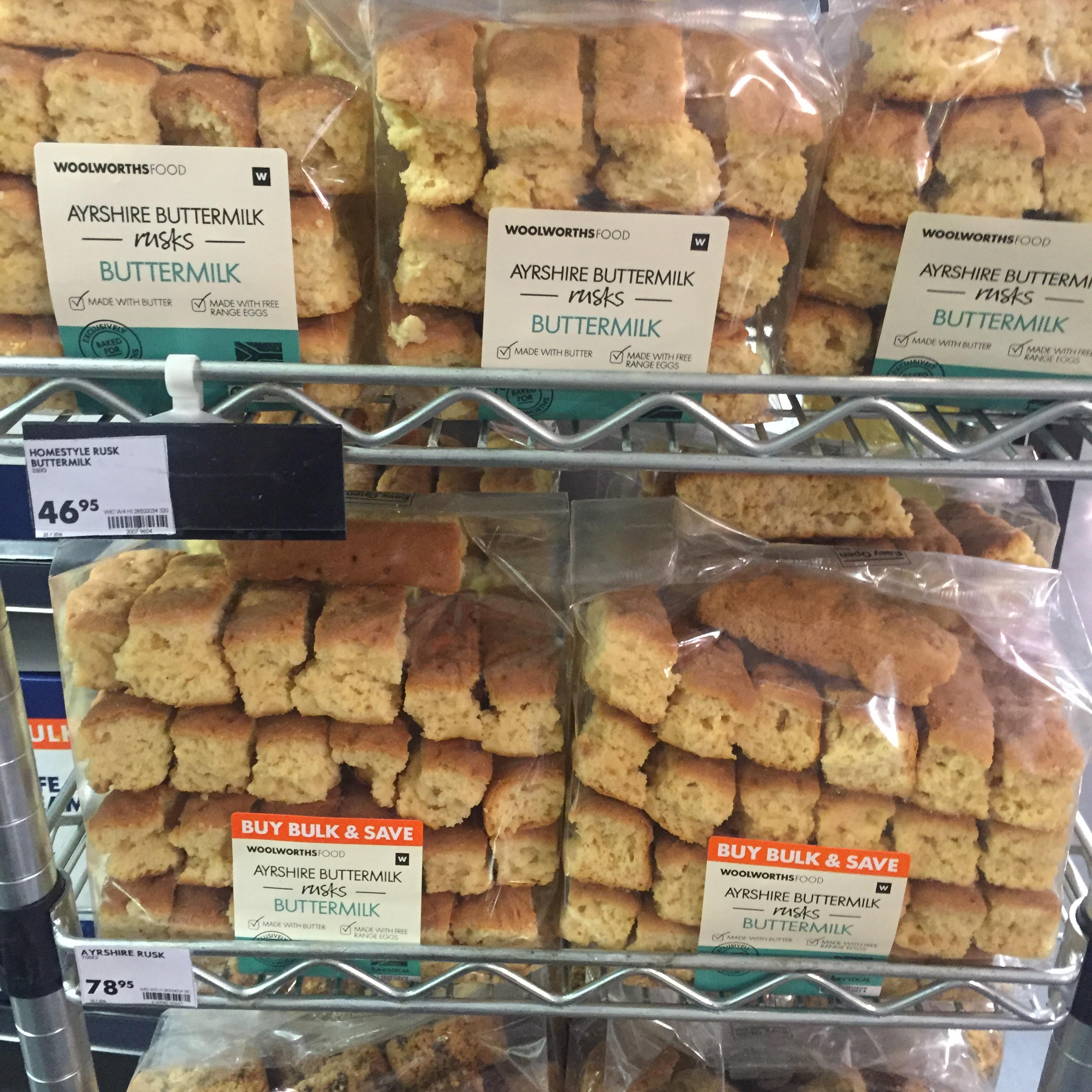 Rusks is the anglicized term for (Afrikaans: beskuit) and is a traditional Afrikaner breakfast meal or snack. They have been dried in South Africa since the late 1690s as a way of preserving bread, especially when travelling long distances without refrigeration. Their use continued through the Great Trek and the Boer Wars[1] through to the modern day. Rusks are typically dunked in coffee or tea before being eaten. 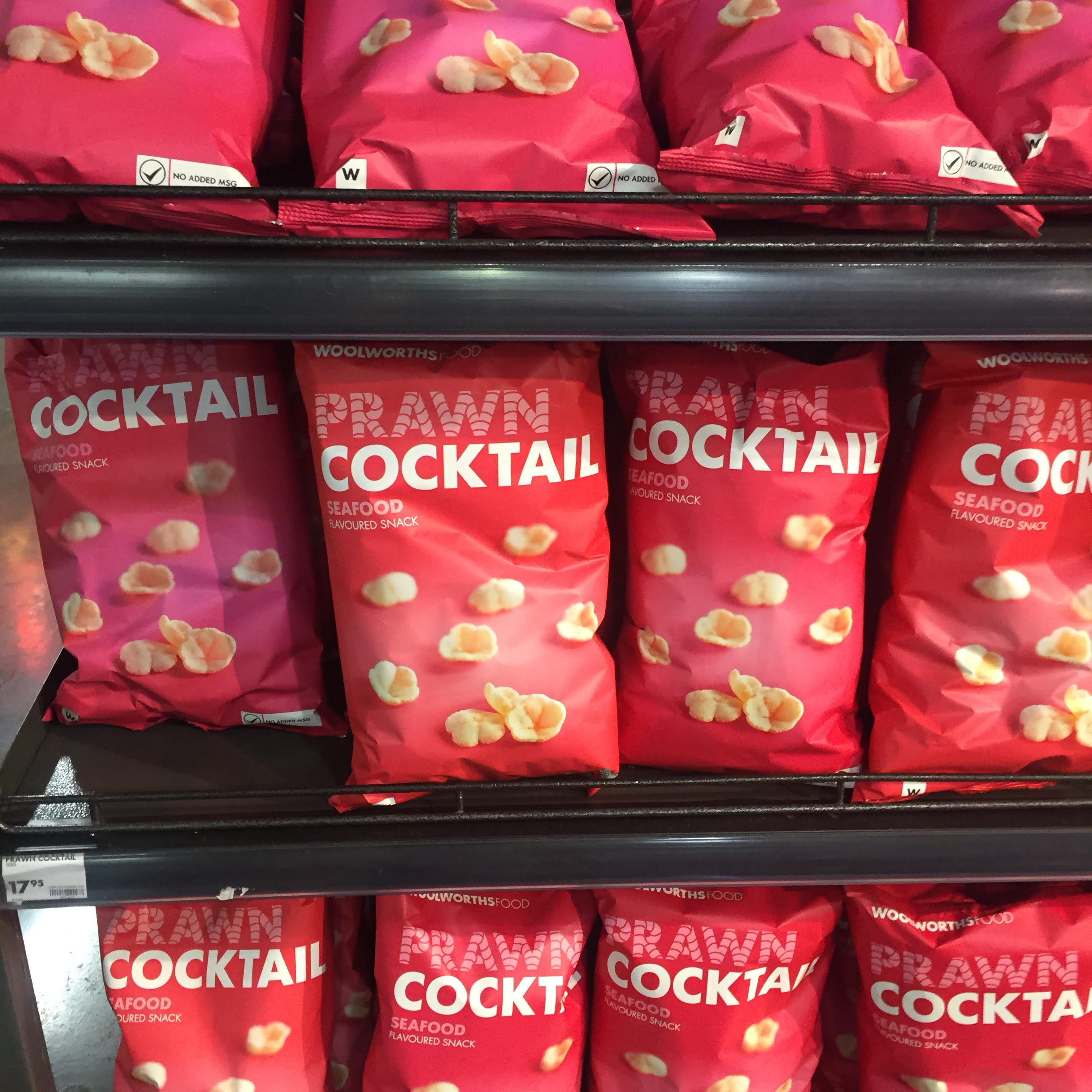 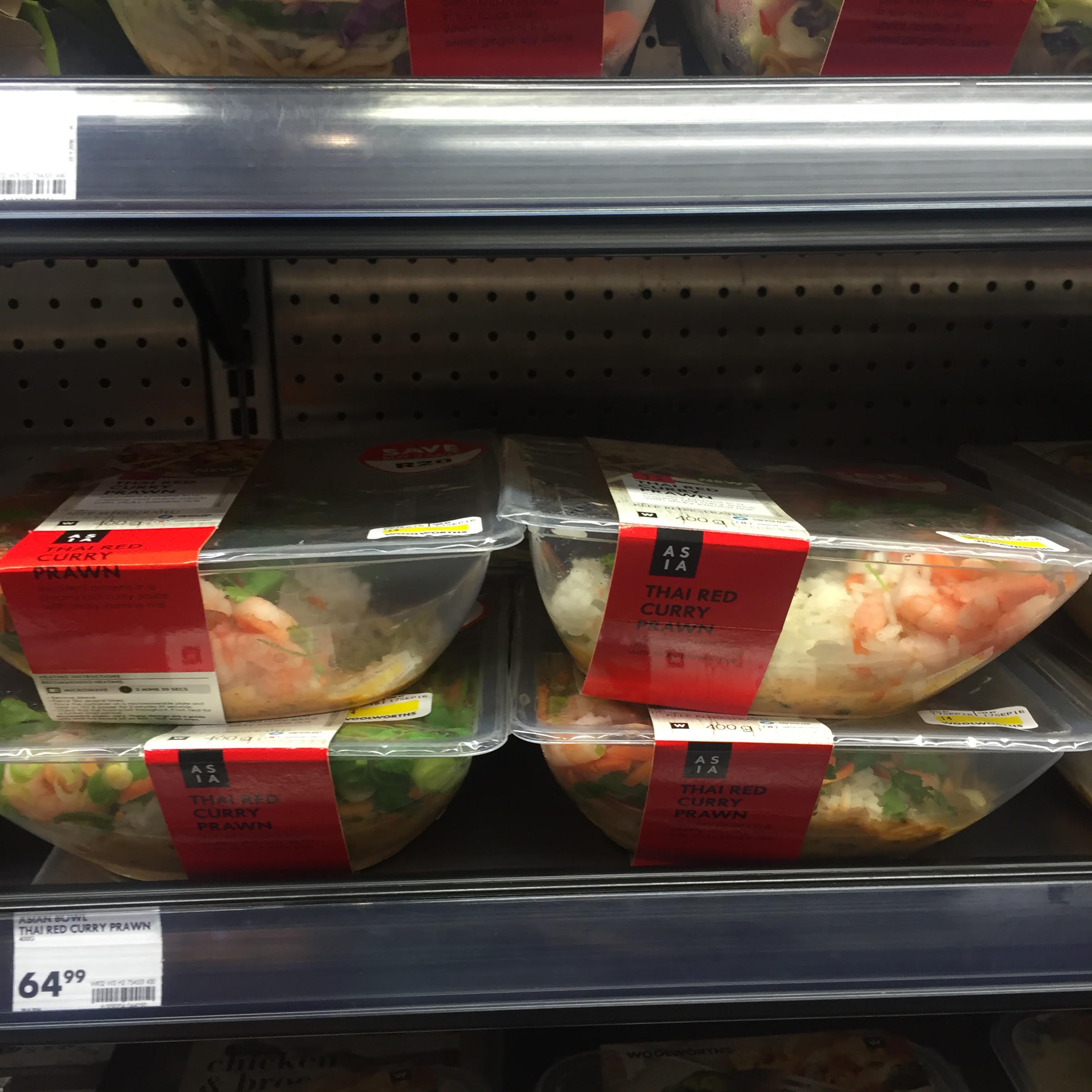 Prawn is very common in South Africa — and you’ll even see prawn-flavored items like prawn popcorn! 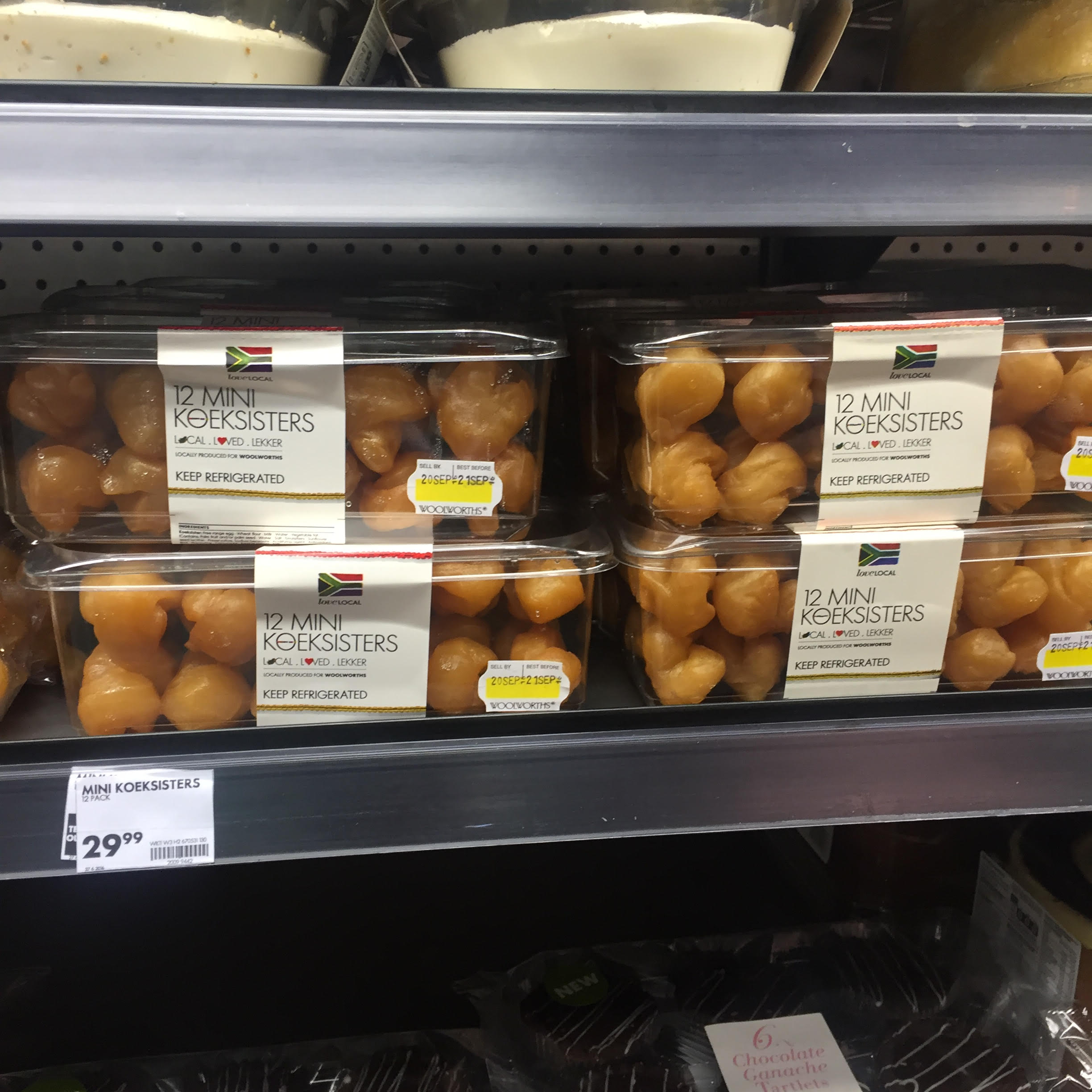 A koeksister is a traditional Afrikaner syrup infused version of a doughnut. The name derives from the Dutch word koekje, the origin of the American english word “cookie”.

Koeksisters are prepared by frying plaited dough rolls in oil, then submersing the fried dough into ice cold sugar syrup. Koeksisters are very sticky and sweet and taste like honey.

They are really yummy but also really, really sweet! 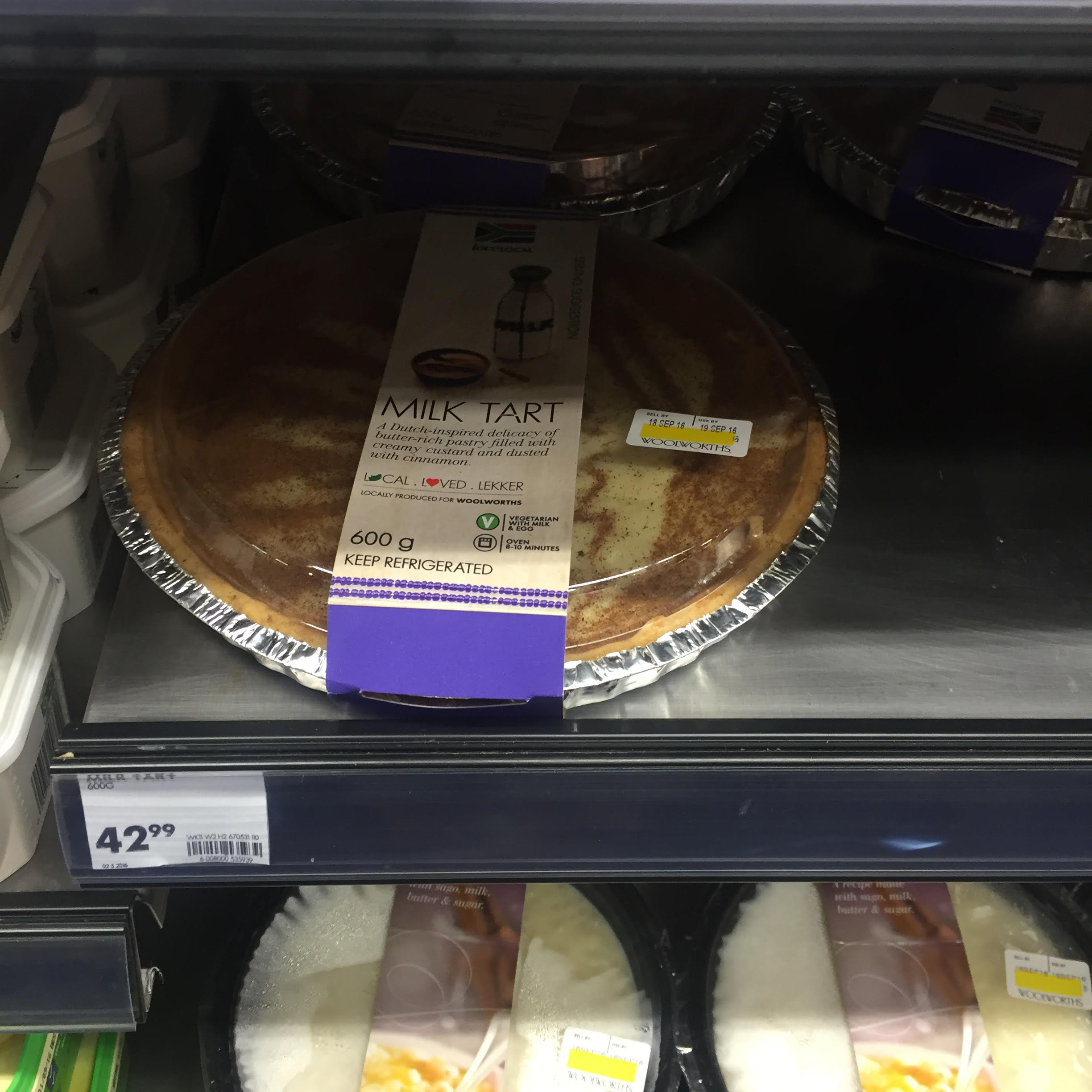 Milk Tart (or melktert) is:

Melktert, Afrikaans for “milk tart”, is a South African dessert consisting of a sweet pastry crust containing a creamy filling made from milk, flour, sugar and eggs. The ratio of milk to egg is higher than in a traditional Portuguese custard tart (Pastéis de nata[1]) or Chinese egg tart (dan ta), in which both was influenced by the Portuguese, resulting in a lighter texture and a stronger milk flavour. 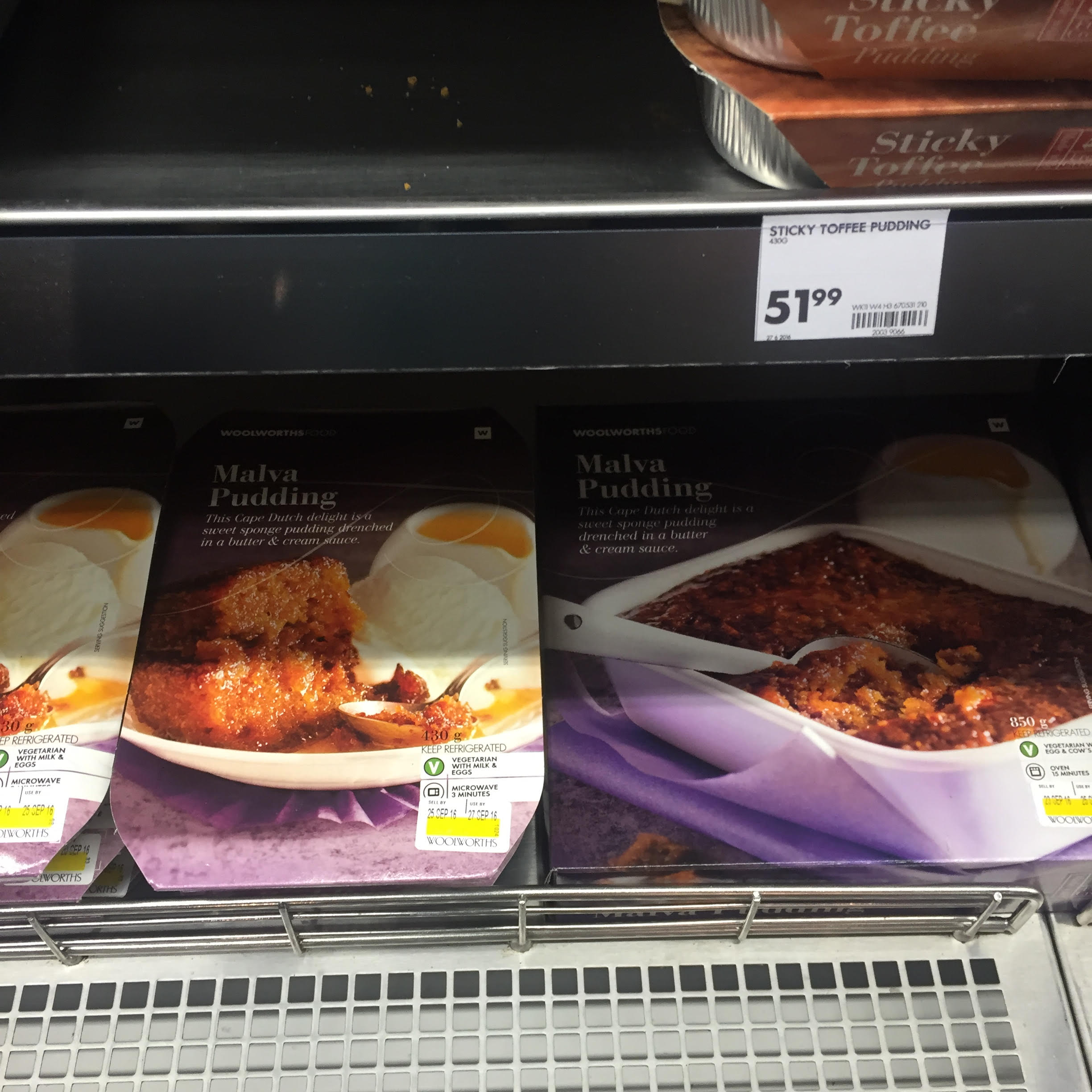 Malva pudding is a sweet pudding of Cape Dutch origin. It contains apricot jam and has a spongy caramelized texture. A cream sauce is often poured over it while it is hot, and it is usually served hot with custard and/or ice-cream. Many South African restaurants offer it.

You can check out the Pick n Pay website here and the Woolworth’s website here. The cool thing is that both stores donate their expiring produce to Take Action Ministry and they distribute them to a number of the Centres in the poor areas where food is scarce and there isn’t easy access to grocery stores.

Have you tried any of the food above before? What are some other interesting foods you’ve eaten?

Want to see some interesting foods I tried on my first trip to South Africa? You can read that post and see the pictures here.