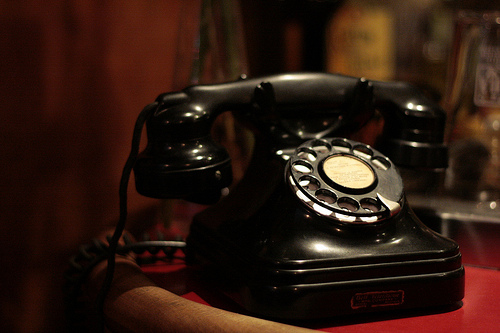 After seven and a half years of marriage, we are officially landline-less! It’s something we’ve been hoping to be able to try for the last few years, but once we finally were able to afford a cell phone plan in our budget, we found it was less expensive to have an internet, cell phone and landline bundle than separate plans.

We’ve repeatedly priced all our options, and it has always continued to be less expensive to have a package deal, than to drop the landline.

Recently, however, our phone company finally started offering lower-priced a la carte options. So just this week, we ditched the landline — and will be saving $15 per month to do so.

Not only is this a simple way to save money, but I’m also thinking it’s going to save time, too, because I’m pretty sure we’re going to have a lot fewer sales calls.

Though, at times, I’d almost be willing to pay $15 per month just to avoid the terribly obnoxious middle-of-dinner debt consolidation sales calls. However, come to think of it, I’m going to kind of miss getting to answer their “How much debt do you have?” question. The response, “We don’t have debt” always completely threw them off-script and it was quite amusing to hear them fumble around trying to figure out what to say next. More often than not, there was silence and then a click on the other end. 🙂