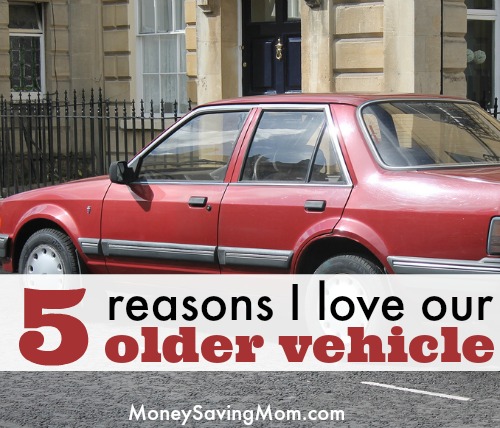 Several months ago, I was browsing Facebook and saw that a friend had posted a question about their vehicle.

The question went something like this: “Our vehicle is just nearing the 200,000-kilometer mark and I’m looking for opinions. Should I keep driving it or buy something newer so I can actually make a little bit of money on it?”

I replied and suggested that they begin paying themselves a car payment each month now so that they would be able to replace when they needed to. It was clear that my opinion was unusual.

I drive a 2005 SUV with a little more than 200,000 kilometers. My husband drives a 2005 truck that’s nearing 300,000 kilometers. We maintain them regularly and neither of them has ever left us on the side of the road.

If you’ve never owned an older vehicle, you might be surprised to know there are many benefits (at least in my opinion). Here are a few of them!

1. It is paid for and has been for a long time!

If you’ve ever owned a vehicle that you don’t have to pay payments on, you know exactly how I feel. It is an incredible feeling of freedom to know that you own what you drive. It’s all yours.

2. I don’t have to worry about every little scratch.

My vehicle already has scratches and scrapes. Another new one won’t hurt.

3. It doesn’t have a bunch of gadgets.

I know this isn’t a bonus for everyone, but I’ll be honest… I’m not all that excited about keyless cars or cameras that turn on every time I turn on the blinker. I feel like simpler is better because there is less to go wrong.

Because we don’t have a car payment, we have the freedom to do other things with our money. Two major things that we have been able to do are pay off debt and give more.

5. You don’t lose as much money on depreciation.

I’ve heard that a new car loses about 60% of its value in the first 4 years — after that, it doesn’t lose nearly as much value. This is important to me because buying a car is probably one of the largest purchases that most of us make that also loses significant value.

These are just 5 of the many reasons we love our older, paid-for vehicle. And just so you know, we HAVE lived the other side of this coin.

When we got married, we both came into the marriage with car payments. My husband drove a brand new car; I drove a used car I didn’t save up to buy. However, our finances were so tight that we had to sell my car and become a one-car family for many years. Even with that change, we still struggled greatly with paying for that car.

These days, we are blessed to have a vehicle that’s paid for. Now that’s something to be proud of!

Rosanna is a wife and mother who homeschools her three children. She loves Jesus, her family, Praise and Worship, writing, and hanging out with friends. You can follow her on her journey at Extraordinary Everyday Mom.