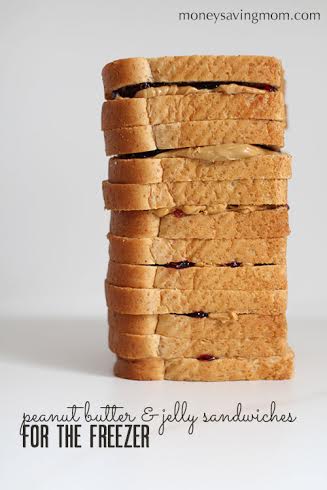 So, I’ve shared lots of really simple, no-brainer tips here over the years, but I think this might qualify as just about the most basic of ideas I’ve ever shared.

In fact, I doubt I even need to do a post about it, since I could probably just put a picture and say, “I made peanut butter & jelly sandwiches for the freezer today. The end.”

And that would about sum it up. But that would also probably be the most boring post I’ve ever written, too. So I’ll try to expand a bit on this basic of basic ideas, for those who would like a few more details. 🙂 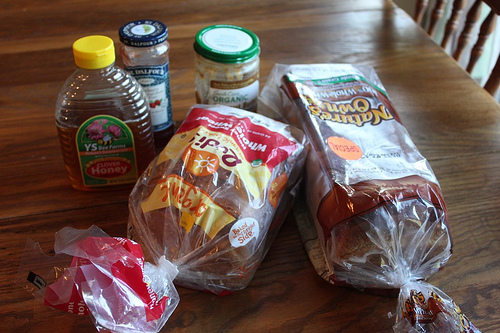 I first happened upon the idea of freezing peanut butter and jelly sandwiches when Jesse was in law school and we were eating a LOT of PB&J. I usually packed one or two sandwiches in his lunch each day and since he often had to leave for school early in the morning, I’d try to have as much stuff prepped ahead of time so that I could just take 20 seconds to pull it all out and put it in the lunch pail.

While it doesn’t really take long to make PB&J, when your time is really crunched in the morning, it can help speed things up a little bit. Plus, I’ve also found it’s so nice to have sandwiches at the ready if you end up needing to leave to go somewhere unexpectedly and no one has eaten any lunch yet. 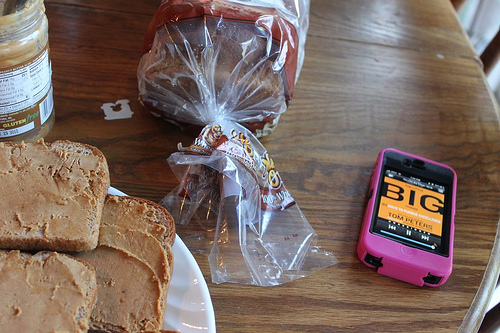 I listened to The Little Big Things today while making PB&J in an assembly-line fashion. {The audiobook has some good things in it, but the crass language is driving me batty! Honestly, that’s a “little big thing” to me!} 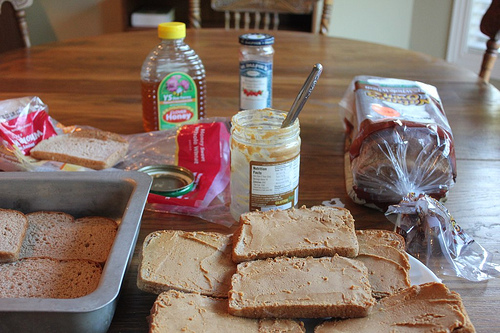 I ended up having to break out a new jar of jelly and peanut butter about halfway through. And Jesse got home about this time and he sat at the kitchen table and told me about his day while I finished up the sandwiches. Multi-tasking at its finest! 🙂 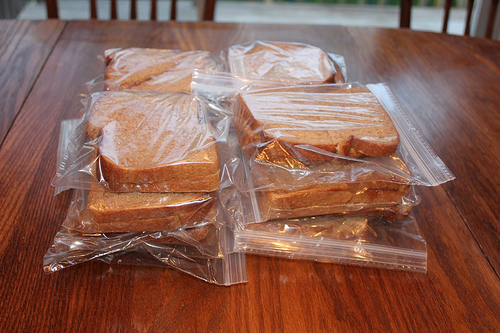 The end result: A big pile of sandwiches! I cut the sandwiches in halves, put them in individual baggies, and then put the baggies in large ziptop bags.

To freeze: Cut and put in baggies (if desired) and store in airtight freezer ziptop bags in the freezer for 4-6 weeks.

To thaw: Stick frozen sandwiches in sack lunches in the morning and they will be thawed by lunch time. Or, you can be weird like me and eat them straight from the freezer. 🙂 You can also warm them in the oven or microwave if you like your sandwiches warmed.