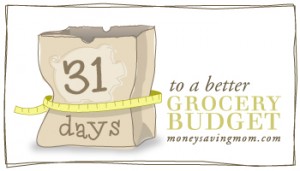 New here? Be sure to read the first posts in the 31 Days to a Better Grocery Budget.

One way we save up to $25 per week is by buying marked-down groceries. I often receive the question, “How do you find out when a store marks down groceries?”

Each Store is Different

I wish I had some super-secret answer to tell you so that you could just magically find markdowns at your store. However, each store is different and often the policies vary widely even in the same store chain in the same town. Sometimes, a store doesn’t even have policies for markdowns and it is based upon whatever mood the produce manager is in as to what kind of deals you’ll find.

Talk to the Produce Manager

Some store chains have a policy against marking items down. The best way to find out is to just ask. Usually, the produce manager is the person to start with.

Inquire what they do with produce that is going bad or milk that is almost to its expiration date and see if they have a policy on marking these items down. If they don’t, ask if you could get a discount if you found a gallon of milk which was expiring in a few days or produce which was going bad.

Plan Your Shopping Trips Around Markdowns

Some stores routinely mark items down on specific days or at specific times. If so, plan your shopping trips around those times.

For instance, our local health food store usually marks the produce and dairy items down every day between 10 a.m. and 12 p.m. So I try to play my shopping outings so I’ll be at this store around lunchtime. If I don’t have a chance to shop around lunchtime, it’s usually not worth stopping by because the markdowns have already been snatched up.

Look For Markdowns First When Shopping

The very first thing I do when I walk into a grocery store is to go around the perimeter of the store and look for the orange markdown stickers on items. I hit the produce section first. Then the meat, dairy and bread items.

By starting with looking for markdowns, I then can rework my grocery list if I hit on a great deal. For example, if I was planning to buy carrots and cucumbers to use as raw veggies during the week, but I found a big bag of marked-down colored peppers and a marked-down head of cauliflower, if they were less expensive than the carrots and cucumbers I was planning to buy, I’d likely swap them and save a dollar or two.

My favorite thing about buying markdowns is that they add some variety to our menu. While I might not pay full price for a roast or salmon, I’ll snatch it up if it’s marked down by 50%.

It Never Hurts to Ask

Just because an item isn’t marked down doesn’t mean you can’t get it discounted. Unless your store has a strict policy against marking down items, don’t hesitate to ask if the store will reduce that past-its-prime bag of apples or that expiring-in-three-days jug of milk.

I’ve rarely been turned down when asking if a store will mark down an obviously-close-to-expiring item. And on a few occasions, they’ve even just given it to me for free!

Don’t Buy Something Just Because It’s Marked Down

Like I often say, “If you don’t need something, it’s not a good deal — no matter how inexpensive it is!” If you don’t like squash, don’t get suckered into buying five big bags of squash marked down to $1 each. Save your $5 and use it on something you’ll actually eat.

Before I will put a marked down item in my cart, I always make sure I can fit it into our grocery budget and also that I have a plan for how I’m going to use it. Oftentimes, upon careful consideration, I’ll end up passing up some of the markdowns just because I’m not entirely sure we’ll use them before they go bad.

What are your best tips for finding marked-down groceries? Share them in the comments.