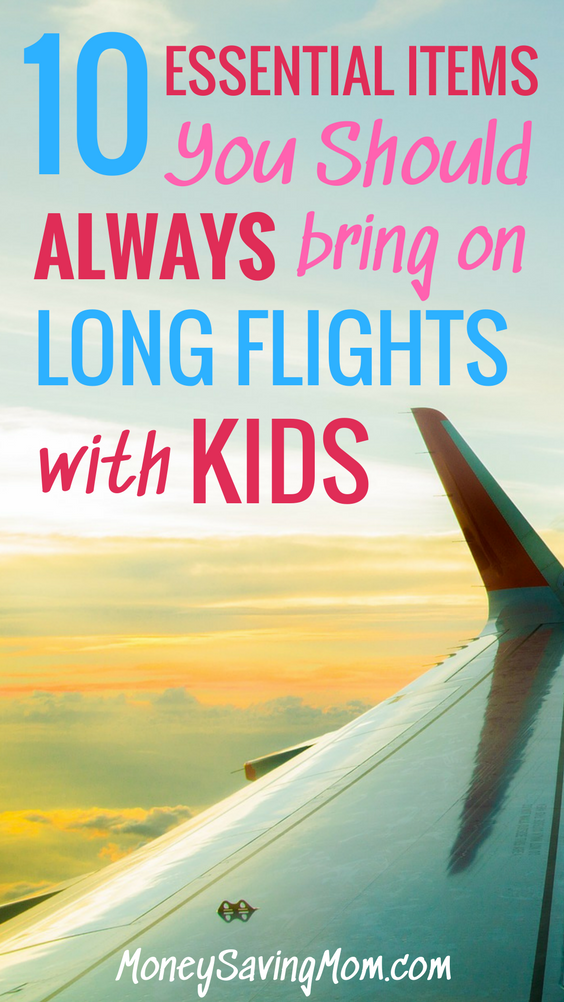 As you all know, we recently flew to South Africa and back, with three kids in tow. We flew Delta from Atlanta to Johannesburg, South Africa — a 15-hour flight each way!

The longest flight any of our kids had been on was a 5-hour flight, so I was a little concerned how they would do — especially since they were quite nervous about the flight.

As a result, I tried to do the best I could to prepare well for the flight. We learned a lot about flying with kids, and I wanted to share 10 things you should bring on long flights with kids. Or, at least 10 things we found were very helpful to have: 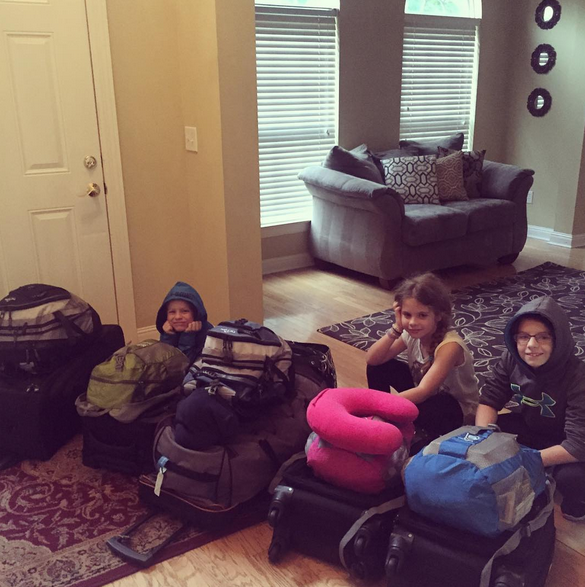 1) Backpacks for Each Person

We packed backpacks for each person with a change of clothes, Dramamine, socks, a neck pillow, a blanket, a few activities, snacks, headphones, and a few other items. This made it so nice for everyone to have what they needed with them. It also simplified things since every one was responsible for their own items.

One of my readers recommended this and it turned out that these were a lifesaver. We used them to wipe off our seatback trays, wipe down the video screens, wipe down dirty hands and mouths, and even to clean up a big bloody nose one child ended up having. 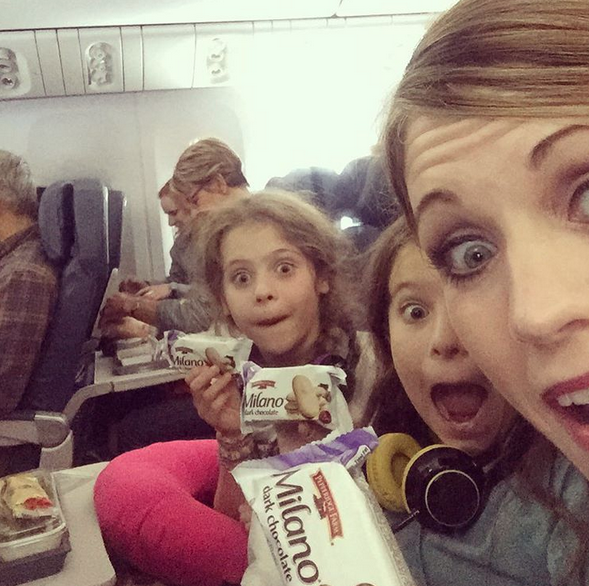 We had all of the kids pack an extra pair of clothes and socks in their backpacks, just as a precaution. We ended up not needing the extra outfit for anyone (gratefully!), but I was so happy to have them just in case.

We also had everyone bring a sweatshirt and wear very comfy PJ-like clothes for the flights. You want to be as comfortable as possible when you’re going to be on a plane for that long!

I had the kids take off their shoes as soon as they were all situated in their seats and put on comfy socks. This helps your feet circulate better and is just more comfortable, too! I also brought slippers with rubber soles for me to wear and loved having these on during the flight.

It’s possible we may have stocked up a little too much on the Dramamine, but I didn’t want to take any chances seeing as I had thought I’d be just fine without Dramamine on my January trip to South Africa and quickly discovered I wasn’t quite so fine.

We discovered that Dramamine actually sort of hyped the girls up, unfortunately. But it was perfect for Silas. And Jesse and I took some for the middle part of the flight, too, so that we were able to sleep and our upset stomachs were quelled. 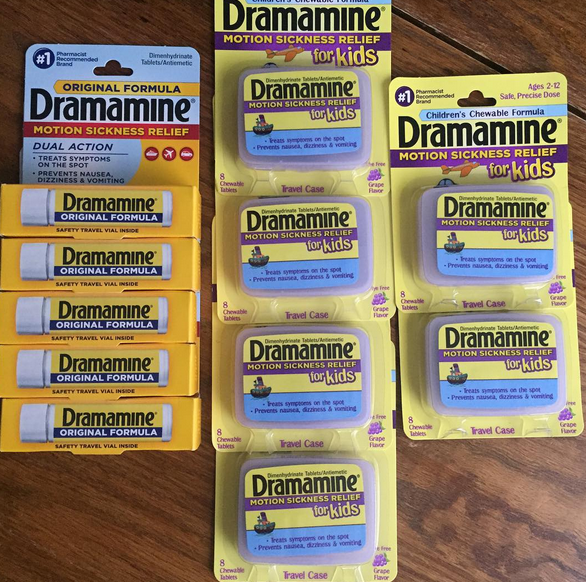 Good noise-canceling headphones were such a lifesaver. We brought a pair for each person and they were each a different color.

The kids not only loved having their own color-coded headphones, but they were great for listening to music and watching movies. Plus, they wore them to cancel out the noise so they could sleep.

If you’re going to try to sleep on a plane, having a great pillow can make all the difference. This is my favorite travel neck pillow and it’s the only thing that allowed me to get hours of good sleep on the plane.

You have to fuss with it a little bit to get it situated just right and I propped a blanket up on it to help give me a little extra support, but if you get it just right, it’s SO comfortable.

You’ll get a thin blanket when you board a long flight, but it’s still nice to bring your own — in case you are really cold or to serve as an extra pillow. I love this blanket especially. 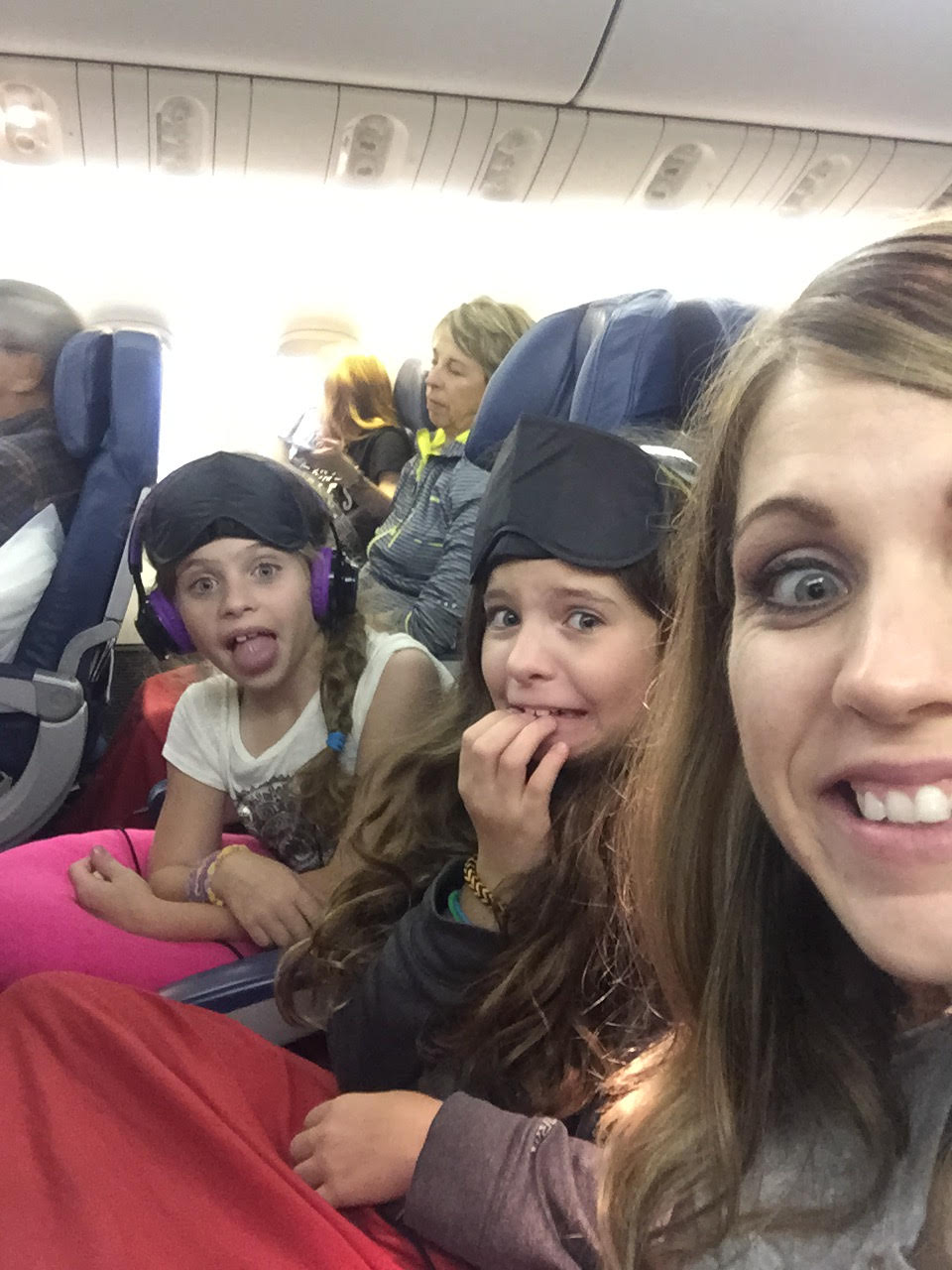 The girls being silly before our flight took off! 🙂

Eye masks are another must. You never know what the people around you will be doing — they might have their light on for most of the night (as did the lady sitting next to Silas) or their TV or iPad might be shining right in your line of sight.

Eye masks helped our kids be able to fall asleep and sleep more soundly. By the way, they usually give them to you for free on longer flights.

We found the food to be fairly decent on the plane, but it was nice to have some extra snacks for one of the meals that was less than appetizing. Plus, it was a nice treat to enjoy when the flight was feeling especially long. 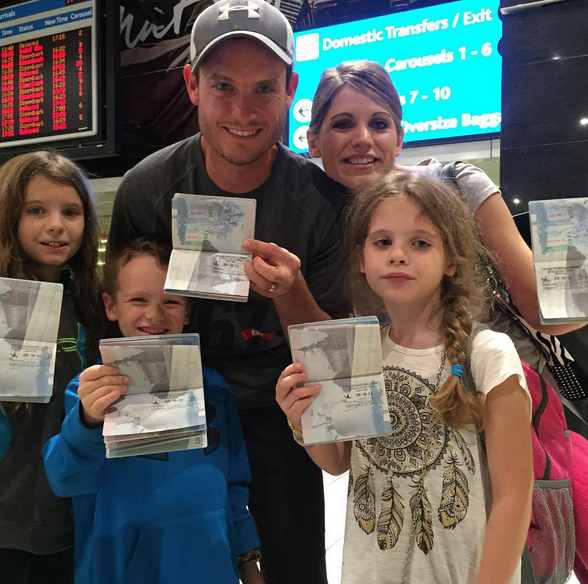 Do not try traveling with three kids on over 30 hours (total) on planes without a complete sense of humor. Laugh at everything you can laugh at — including yourself!

On the first flight, the last hour or so was grueling. The kids hadn’t slept much (more on that in a bit), everyone was so ready to be off the plane, and I was just tired of trying to redirect and correct bad attitudes.

I tried to come up with anything and everything we could to laugh about and distract ourselves from the fact that we had been on a plane for over 14 hours. And it helped make those last 60 or so minutes not drag by so slowly or painfully.

You’re going to need lots of extra doses of patience to survive a long flight with kids. So pack as much as you can to bring with you. 🙂

I tried to get extra sleep ahead of time and come to the flights with very little expectations other than that we would make it to our final destination in one piece. I also went into the flights remembering that my kids were scared and anxious and that this would probably play into their attitudes… and it did.

So when they were reacting in an irritated way, I tried to remind myself that, yes, those attitudes were not good, but I needed to give extra grace to them because they were stepping way outside their comfort zone in this. So instead of correcting them as firmly as I may have in another situation, I tried to ask them questions like, “How are you doing?” “How are you feeling?” Because I knew that more than stern correction right then, they needed love, empathy, and reassurance. 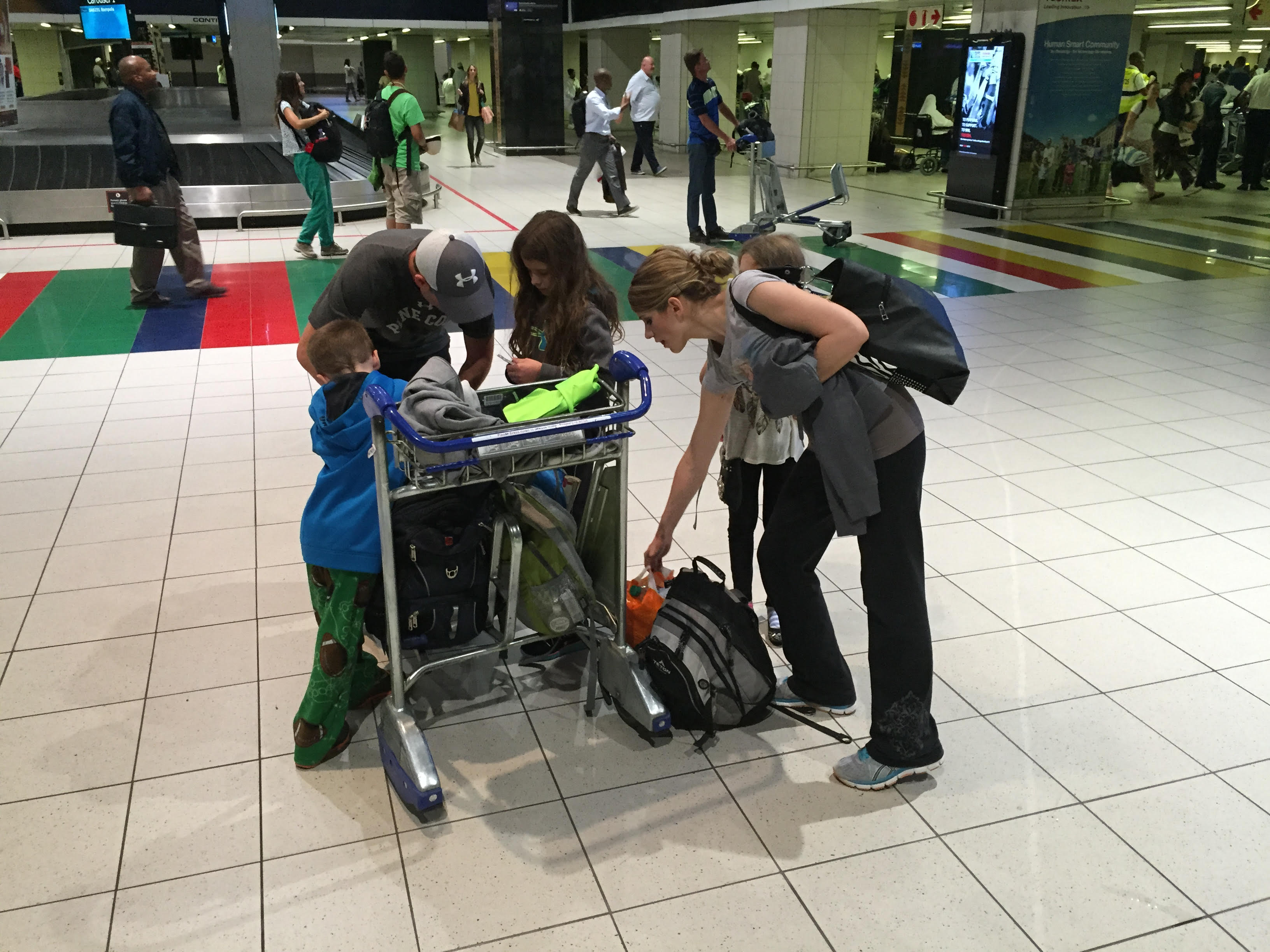 Since this was our first big trip with kids in tow, we learned a lot. Here are three of the most important lessons:

1) We needed to set boundaries ahead of time. On our first 15-hour flight, we sort of had an anything goes attitude. I just wanted to survive and I was happy with our kids doing whatever it took to make it through with decent attitudes.

The problem was that I didn’t set any boundaries ahead of time: like on when they needed to have lights out and movies shut off. So because we didn’t have boundaries set in place, they just wanted to watch movies for hours. Which meant that they didn’t want to sleep. And this made for very grumpy kids.

On the way home, we set the boundaries ahead of time, reiterated them, and took away the headphones and we turned off all of the electronics during a long stretch of the nighttime. This worked SO mu

ch better and the kids actually ended up sleeping well and the flight went very smoothly.

When I flew South African airlines in January, they had a “blackout” time during the night — I’m not sure what it was officially called, but for what felt like 10 hours, no one was allowed to turn on their overhead light, talk above a whisper, or do anything other than sleep, quietly get up to go to the bathroom, or watch a movie or read on a device.

Instead, Delta had no such “blackout” time and many people had their overhead lights on all night — including one lady right next to Silas — and people were constantly up, talking, congregating around the restroom, and so forth.

It wasn’t incredibly loud, but it was quite distracting for my kids and kept them from being able to sleep as much — especially on the first flight since they were already so nervous.

3) Always double-check your seat when you leave. Oh how I wish we had done this! My bag with all my medicines, vitamins, supplements, my contacts, my glasses, and deodorant didn’t make it out of the airport with us when we arrived in South Africa. And it made the first few days of the trip especially hard as we had to try to track down replacements for the can’t-live-without items.

We know that I had the bag on the plane and we think I possibly left it under the seat. I didn’t double-check as thoroughly as I usually do (probably because I was just so ready to be off the plane!!) so we’ll never know.

(The airline checked multiple times and didn’t find it on the plane, so we’re not sure what happened to it. But had I checked thoroughly around my seat before deplaning, I may have found it and saved us a lot of headache in the beginning of the trip.) 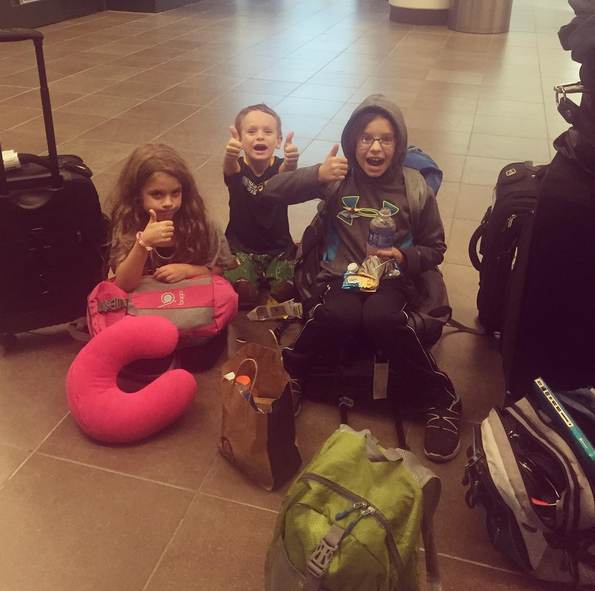 What tips and tricks would you add to my list? Anything I forgot or any other questions you have about the plane rides? I’d be happy to try to answer them, if I can.