Home » LITE Feed (non-deal) Posts » Why You Should Always Label Your Freezer Foods (er, The Case of the Pancake Batter Rolls!) 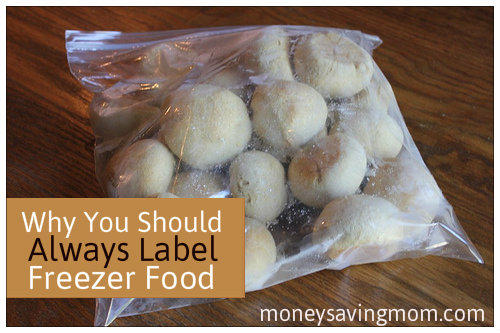 I know this isn’t going to help my reputation for messing up recipes at all, but I still had to share… 🙂

We were having guests over for lunch on Sunday after church. Saturday was a rather busy day with a wedding we attended in another town and some other things that had to get taken care of.

So it was quite late before I finally got started making the Bread Machine Buttery Rolls. I dumped everything into the bread machine and got busy finishing cleaning up the house while the dough was mixing in the machine.

When the dough cycle was finished, I went to take it out and form it into rolls. I noticed immediately that it seemed a little stiffer than usual.

But I figured the dough just needed to rise and it would be fine. I formed the rolls, put them on a pan, and curled up with my book while I let them rise.

20 minutes later, I checked on the rolls and they hadn’t risen at all. Maybe they just need some more time, I thought.

So I went back to my book and read for another 20 minutes. By now it was well past midnight, and I should have been asleep.

20 minutes later and they still hadn’t risen at all. I finally gave up on them and decided to go ahead and bake them hoping that that would work some kind of miracle.

But baking them didn’t change anything, except cook the dough. They looked pathetic.

I decided to taste one and see if maybe they tasted well enough to be salvaged for our lunch the next day. What in the world? I thought to myself as I took a bite. They were really salty and funny tasting.

And then it dawned on me. Remember that big bag of Homemade Pancake Mix I made not too long ago? Well, apparently I had mistaken it for whole-wheat flour. No wonder they tasted gross and wouldn’t rise.

Needless to say, I gave up on roll-making and went to bed. In the morning, I somehow hurriedly pulled off making a quick batch of rolls and getting them baked before heading out the door for church. They weren’t the most beautiful batch of rolls I’d ever made, but at least they were better than the Pancake Batter Rolls. 😉

Lesson learned: Don’t put unlabeled bags of baking mixes in the freezer and assume you’ll remember what they are the next time you’re baking!