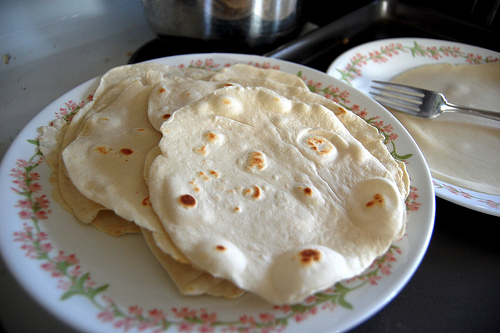 A few months ago, I got an email from someone who was really bothered by the fact that I don’t always make tortillas from scratch. This person felt I’d save so much money by doing so and they were kind enough to pass along their tried and true recipe.

While I very much appreciate the input from this reader (I learn so many amazing things from you all and am constantly challenged by your frugal ways!), I have to disagree with her that I’d save a lot of money by making my own tortillas.

Your prices might be entirely different, but here in Kansas, we can pretty routinely pick up a package of 8-10 tortillas for around $1. When I priced out the ingredients of homemade tortillas, I figured up that it would likely cost me around $0.30 to $0.40 per batch.

So yes, you could say that homemade tortillas are slightly less expensive than store bought tortillas. However, you forgot to factor in one very important part of the equation: TIME.

I could probably figure out a way to make them more efficiently if I did a bigger batch, so let’s say I became the world’s fastest tortilla-maker and I could whip out 70 tortillas from start to finish in an hour. At this rate, I’d still only be saving less than $5 for an hour’s worth of work.

If your family loves homemade tortillas, or you don’t want to eat some of the ingredients in store bought tortillas,  or you love making tortillas, or you go through seven packages of tortillas a week and the least expensive you can find them in your area is $4.99 per package, then by all means, make homemade tortillas. But, don’t do it merely for the cost-savings because, unless you live where tortillas cost $7 per bag, the savings per hour is so slim that your time would very likely be better spent elsewhere.

It’s imperative, in seeking to be better home economists, that we value our time as well as our money. It is easy to get so caught up in trying to pinch every penny, that we lose sight of the big picture. We can become so focused on trying to save money that we end up spending hours and hours and hours of time to save a mere few dollars.

Personally, if I’m not saving at least $20 per hour by implementing a particular frugal practice, than I’d rather invest my time elsewhere. Of course, this rule doesn’t apply if it’s just something I really enjoy doing. However, if I’m doing something primarily for the money saved, then it is important to me that I’m actually saving money!

If you feel like you are spinning your wheels and going nowhere when it comes to saving money, I encourage you to stop and consider how much money you are saving per hour in your various money-saving activities. If it’s below minimum wage, it’s probably time to go back to the drawing board and find some other money-saving practices to implement which will give you a better return on your investment of time and energy.

After all, time is money, too.

photo by This Year’s Love