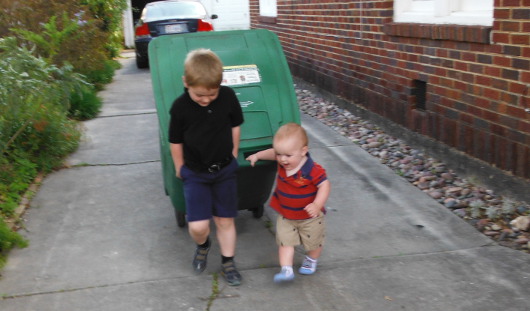 Guest post by Jill Jarvis who blogs at BigKidSmallCity.com

When our son was 4 years old, we decided to start a Garbage Can Curbside Service where Joe could his neighbors trashcans out and back in on trash day for 25¢ per can.

The business was started in lieu of an allowance, as a way to teach Joe about money but also to avoid a situation where he felt entitled to it. The work was easy enough for a 4-year-old, but just hard enough to create learning opportunities.

Over the last 1.5 years, Joe has learned a lot of valuable life lessons! Four of the lessons are:

Joe was excited to start this service, to help the neighbors and earn money for Legos. But there have been many weeks when Joe has not wanted to do his work.

However, he learned that his neighbors would be stuck with stinky trash cans if he did not show up, so he went to work anyway. He may grumble about it some weeks, but he always gets it done.

Joe gets to make all the decisions related to the Garbage Can Service. He gets to decide on expanding the business or quitting it. He also gets to spend the money.

By making his own money, Joe is somewhat financially independent and is able to make some purchases on his own. Joe buys Legos but also chooses to donate money to US Soldiers through the USO.

Also, by making his own business related decisions, with guidance from his parents, Joe has become more confident in his decision making ability. I’m hoping this 2nd skill will prove useful on the playground, in middle school and beyond.

4. Understanding the Value of a Dollar

As soon as he started collecting money, Joe began to understand what money is worth. He quickly learned that there are 4 quarters in a dollar and that it takes 6 quarters to buy an ice cream and 200 quarters for a fancy Lego set.

Joe has also learned that if he is saving up for something, he must do his job a set number of weeks before he will have the money. So, if he wants a simple Lego set, he will need to work less than if he wants the deluxe set.

Joe has also learned about loans. We have been out when Joe really wanted to make a purchase, but did not have his quarter jar. He has had to decide if he would take money from his parents, and then pay it back, or wait to buy his treasure. It turns out that he thought loans were just free money. When he discovered he had to pay the money back, he opted to wait.

As his parents, my husband and I have had to put in effort to help supervise Joe in rolling out trash cans each week, but these four life lessons are well worth the minimal time and energy.

And the best part about starting the Garbage Can Business is that the lessons have been automatic. We have not had to stage discussion; we just do the weekly work.

Jill is an engineer for a telecommunications company and a mom to the Jarvis family. She likes the first job but loves the second. Jill and the kids explore Houston and blog about the adventures, along with lunch box ideas and Joe the Garbage Man stories, at BigKidSmallCity.com.