My husband and I recently celebrated our third wedding anniversary. While those three years have seen my college graduation, a cross-country move, five months spent living with my family (all seven members), and the birth of our first child, we haven’t had any time away for just the two of us since our first anniversary.

Because we have conflicting work schedules, time together at home is also much rarer than either of us would like. In light of all of that, we decided to make it a priority to save money for a two-night getaway to the Oregon coast. Our goal was to have the money, $400, saved by the end of the summer so that we could take our vacation in the fall, when hotels would be offering off-season mid-week specials.

We didn’t want to take money from any of the areas in our budget, so I knew we would have to get creative.

In the middle of June we decided that any “extra” that came our way would be saved in a newly-made Vacation Jar. With our empty jar waiting, we developed a plan of action:

I began cashing the checks I receive for taking online surveys. In addition, we cashed in the spare change we’d been accumulating for several months. All of that together earned us $123.

I had been reading a lot about selling items on eBay, so I tried that, too. I sold my husband’s PlayStation 3 (with his permission, of course) along with several video games, DVDs, an iPod, and clothes. That netted us a total of $355, after we paid to ship everything.

Oregon offers a refund of $.05 each on aluminum cans and water bottles that you return to the store, so we finally turned in the cans we’d been hanging onto for quite some time. That alone earned us just over $23. I’ve already done the math; we redeemed 470 cans! Yes, my husband has a soda addiction, and yes, we’re working on that.

The goal that we thought would take us two and a half months to reach was exceeded in less than a month, and my husband and I are both shocked that most of that money was just sitting around our house. 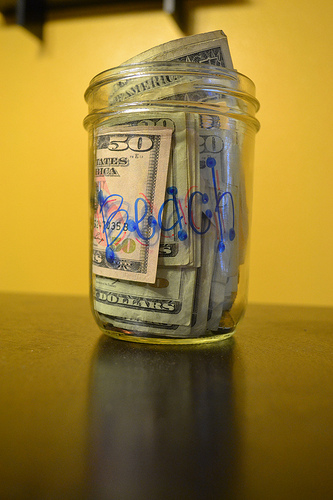 We’ve deposited the contents of the Vacation Jar in a special savings account, where it will sit while I browse the internet, searching for an amazing deal. Wherever we end up staying, my husband and I will both be able to completely relax while we’re away, knowing that we won’t be coming home to the added stress of paying off a new debt!

Abby lives in Oregon with her husband, Jonathan; son, Griffin; and pony-size black lab, Tucker. She blogs about saving money and simplifying life at Oregon Mom on a Mission.