A testimony from Amy

In October of 2008, my husband and I discovered we were pregnant. While this baby was not a “surprise” by any stretch of the imagination, we quickly discovered that our world was about to be turned upside down.

The first dilemma was getting from point A to point B with baby. You see, at that time our vehicles were not purchased with a baby in mind. My husband’s car, while very nice, was a four-door Coupe and not the most space-efficient. A car seat + baby + diaper bag would take up most of the back seat.

My car was a “college car.” It was my first car, purchased used when I was in high school. And, five years later, I was still driving it. It was beginning to become unreliable and definitely wasn’t the safest option for our baby. Because of this, my husband and I decided to start saving for an SUV. We started the savings process almost immediately after seeing the positive pregnancy test.

Our goal: pay cash for a safe, used (but still in good condition) SUV all before baby was due in July. 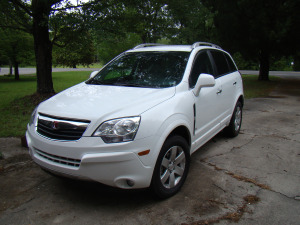 My husband’s uncle is a car dealer. We talked to him early on in the process and told him what we were looking for. Once we had the money saved up (all $13,000!) we gave him a call and he began the search.

It took him about a month and a half, but he eventually (and before baby arrived!) found the perfect SUV for us. It was a 2008 Saturn Vue in great condition.

The carseat fits great in the backseat and we still have room in the trunk for our dog! We will even have room for an extra carseat come January. 🙂

I love my SUV, mostly because I know how hard we worked to pay cash for it, and how much money we saved in the long run by doing so!

Amy is a stay-at-home mom to a little boy with a little girl on the way. Her husband is a computer programmer who works hard to provide for their family. They are striving to live debt-free and set a good example for their kids of what it means to be good stewards of what God has given them.