Testimony from David and Melissa

The best piece of pre-marital advice we ever received came from my Dad just over nine years ago. He suggested that if we ever hoped to be a one-income family giving me the freedom to stay home with our children, we should budget only on that one income from day one.

We decided to take that advice to heart and right from the very beginning, my income (I’m an elementary teacher) went straight into our savings account. Over the years we’ve used those savings to help pay cash for several different things; the biggest of which was for the adoption of our daughter. 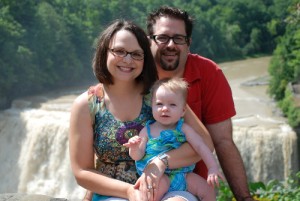 We struggled with infertility for over six years before adopting our daughter this past January. During that time we spent literally thousands and thousands of dollars on fertility treatments (including IVF). However when all of those treatments left us with only broken hearts and two miscarriages, we decided it was time to explore adoption. God came through in a truly remarkable way and provided a beautiful baby girl for us almost immediately.

Adoptions are expensive no matter how you look at them. Ours cost us in the ballpark of $15,000. I am pleased (and still a little surprised and amazed) to say that because of our sacrifice of that second income for the last 9 years, we were able to pay cash for the entire amount.

Now that I’m finally a mom, it was a real dilemma whether to now stay home with our daughter or return to work.  Knowing that our ability to adopt again is based on being able to raise another $15,000, we made the decision for me to work at least another year so that our next adoption can also be paid in cash.

We are David and Melissa Gafford and we have a 7 month old daughter named Addison. You can read more about our adoption story on our blog.