One of the best pieces of advice we got before my husband and I married, was to read The Total Money Makeover by Dave Ramsey. We became huge fans of Dave’s advice and because we both came from frugal families, we felt equally yoked for our financial future — even knowing my husband wanted to go to medical school.

About six months before we got married (going on six years ago now!), my husband was accepted to medical school. Because we had a goal of staying debt free, we immediately started to devise a plan.

I had been working for a few months at my first “real job” and was already starting to see savings build little by little. Neither one of us had any previous debt as we had college paid for by scholarships, and I had worked my way through graduate school as a Graduate Assistant. So we were already off to a good start.

We knew how much medical school tuition would cost, and added in some extra for books, equipment and miscellaneous items he might need. And we really started to pray. We prayed for God’s direction, for discipline, and patience. After all, I’d just finished school myself, and after working hard to get through it, it was tempting to want to splurge.

You know what? God provided!

First, we found out a few months after his acceptance that my husband had received a scholarship to cover the first semester — what a blessing! It gave us a little more time to save. Secondly, God blessed my work, and we saw little savings grow more and more into reaching our goals!

By staying the course and keeping to our commitment, at the end of my husband’s second year of school, we had already saved enough for all four years! After counting tuition, fees, equipment, National testing, and all the books he needed, we paid around $50,000. God is so good! We can look back and see His hand and blessing the entire way.

The Bumps in the Road and God’s Provision

Not everything came without some sweat — literally.

First, at the beginning of the third year of school, my husband’s car just went kaput. You couldn’t drive it over about 50 mph without feeling like you were trying to use your body to hold down the steering wheel. The tires were worn out, the engine needed some serious work and it had no air conditioning. And let me tell ya, here in Mississippi, that was a big deal! Rob had just started clinical rotations and was dressing up for work so he would leave before daylight, to keep himself from sweating too badly. Eventually, we were able to pay cash for a used car for him. 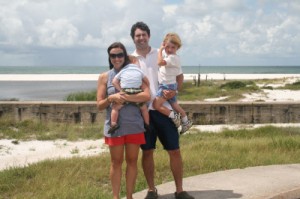 Secondly, and very sweetly, our first little bundle came into the world the middle of the third year (our second came a month before Rob graduated). I never knew I’d want to stay home with him so badly. I cried and cried, thinking in my heart that God’s timing was not right for me to stay at home — especially while we had no other income.

The month I went back to work, the company I worked for announced that, for the first time ever, wanted to hire someone part-time in my area! God was so faithful. He gave me the desire to be home with my son, and He provided the means!

So, I worked part-time until January of this year when I quit my job to stay home full-time. By saving up enough for medical school early and living frugally along the way, we were able have set aside enough money in the bank to supplement my husband’s income until he finished residency.

You want to know the cool thing? It’s been eight months, and we still haven’t used a dime of our savings!

And the Rest of the Story?

My husband is in his second year of residency now, and we stay committed to our goal. Rob doesn’t make much as a resident, and still has three years to go. However, we know that living frugally now gives us a peace about where we’ll be in the future.

We are so happy and so thankful to be debt-free! So many of my husbands friends and classmates came out of school with six-figure debt. God has taught us a lot through the past six years; it’s not always been easy, but it’s been so worth it.