A testimony by Erica from Super Steals

I used to have a credit card habit–-a bad one. Before I got married, if I needed something that I didn’t have the cash for, it went on the card.

Needless to say, that habit eventually racked up a significant amount of debt. The first project that my husband and I took on when we got married was working on getting rid of that debt, or at least lowering it. Little by little, we paid off most of our cards and whittled it down to student loans. (I wish that was still true, but now we have a mortgage!)

While we were in the process of paying things down, we also decided that we wanted to save up for some exotic vacations. So, we sat down, made a list. It looked something like this: Egypt, Greece, Italy, baby.

Our plan was to go on three big trips and then start a family. My Mom is a travel agent, so finding out how much a trip to Egypt would cost was easy. Saving that amount, however, was not as easy! She said we needed about $6,000 to make it happen.

I remember feeling overwhelmed by that number. How were we going to come up with $6,000?

I turned to coupons.

In just one year, we cut our spending on groceries, dining out, and shopping so dramatically that we were able to save the $6,000 needed for the trip and about $1,500 in spending money to take with us.

Long story short: we paid cash. Yes, cash. Imagine that! No credit cards–just straight out of our bank account.

We flew to Cairo in June 2010 with a couple of friends, visited the Pyramids of Giza and Sphinx, sailed down the Nile on a cruise and spent a few days at a beach resort on the Red Sea. We even visited Mount Sinai and saw what is believed to be the burning bush. It truly was an incredible experience.

Six months later, when the holidays rolled around, we decided to use some more of our coupon savings and fly to Paris for a few days. What a beautiful city and the perfect place to spend Christmas and New Year’s with the love of my life!

We also saved another $6,000 this year and went to Greece in May. We spent 17 days touring the mainland and the Greek islands. On some days, I felt like I was living the movie Mama Mia. Greece is so rich in history and culture–and it just has this magical feel to it. I honestly did not want to leave!

We also spent a weekend in Madrid, Spain, where we celebrated my 28th birthday. That part of the trip meant a lot to me, because my great grandparents were from Spain. 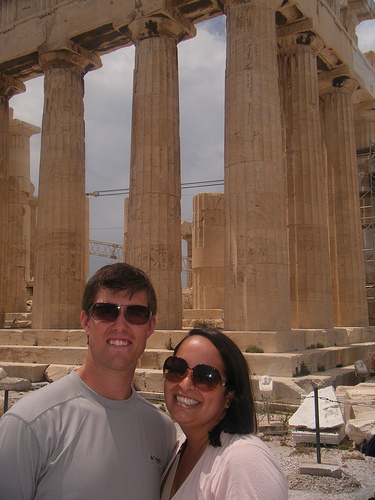 Now, we’re saving for our next adventure–Italy. We plan to spend time in Rome, Florence, Venice, and Sorrento. I am so excited. We now have our couponing and saving down to a science, and it has gotten much easier than it was at first.

Yes, sometimes it’s a lot of work. Yes, sometimes I feel like giving up and just spending money on whatever I want. But I saw a quote on Facebook the other day that made a lot of sense. It said something along the lines of: “Don’t sacrifice what you really want for what you want right now.”

That quote hit home for me, because saving for these vacations–and saving in general–is sometimes a challenge. Couponing and being frugal sometimes feels like a second job. But, when it comes down to it, traveling with my husband is what I really want, and couponing made it happen.

Erica Rodriguez is a full-time PhD student at the University of Florida and part-time TV news reporter. She lives in Ocala, Florida, with husband Steven Kight and their two rescue dogs Mili and Max. She blogs at Super Steals.