A testimony from Carolynn at My Little Bit of Life

Pulling into the drive way from getting the kids’ pictures taken and picking up a bring home and bake pizza, I hear my phone ringing. I have to sternly ask the children to quit whining so that I can answer the phone.

My husband had been in a car accident and ended up rear-ending a car. Our car hit the trailer hitch of the car in front of him, so our car had quite a bit of damage, and the other car just had some scratches. Thankfully, everyone was fine as they weren’t going very fast. 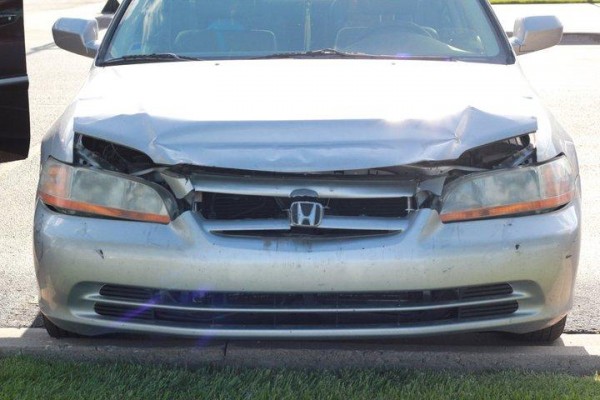 The damage was pretty extensive, $4,400 worth! I hadn’t raised our deductible yet (I had been thinking about it) and we only needed to come up with $500 (plus over $100 to pay the ticket).

Of course, getting into a car accident isn’t ever fun; it’s a big inconvenience. My husband was really upset, mainly over the money aspect. I told him not to worry about it because we are on Dave Ramsey’s Baby Step #3. We had the money in the bank to cover all of the unexpected expenses.

It is still very disappointing because we weren’t planning on spending the money. It was intended to be saved, but accidents happen (literally)!

Had this accident happened several years prior, this would have been a monumental stress! Before we took Financial Peace University, we were almost to the point of having to put our groceries on a credit card.

Instead of an Emergency, It Was An Inconvenience

Right before the accident happened, I was starting to feel defeated. We took Financial Peace University, got out of debt in a little over a year, added children and became a one-income family. I felt like we had made so many changes and were really sticking to our budget and I was getting discouraged because I felt like we weren’t really moving ahead much.

I feel this accident was one way of God showing us how far we’ve come. Because of the changes we’ve made in how we handle finances in the last two years, what could have been an emergency became an inconvenience, not a life-defeating problem.

Carolynn is a stay-at-home mother of four. She was a teacher and now blogs about life: parenting, pregnancy, coupons, FPU, and teaching at My Little Bit of Life.