A testimony from Liz at e squared.

When my husband and I got married in 2005, he had never been in any kind of debt. He was working his way through college and paying his school bills without the use of student loans.

While he had some savings and some mutual funds, I had a small car loan, $11,000 in student loans and no savings. I sometimes joked that he brought all the assets into our marriage, while all I brought were liabilities!

We only had one car, and although I would have loved to buy a second one, we made the decision to make do with one car until we could afford to pay cash for a second car. This meant paying off the loans I currently had — which were driving my previously debt-free husband crazy! — before we could even start saving for another car. Back then, it seemed like quite an impossible goal. 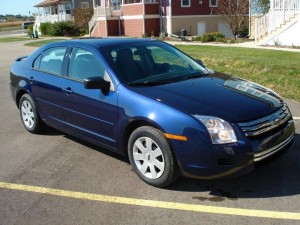 We are both incredibly thankful for God’s grace and provision. I’ve learned much about patience, contentment and stewardship in the past five years. Although reluctant to this whole idea at first, I’m glad for the wisdom my husband had financially and so thankful to not have a car payment!

Married for five years, Eric and Liz live in Madison, WI. Eric works in retail management while Liz works from home as a medical transcriptionist and does her best to keep their blog, e squared, updated.