Last month my husband and I bought a car in cold hard cash. As a young couple, it was our first big purchase and a very stressful one.

For the holidays last year we decided to skip the gifts and pay off all the random credit cards that we had been ignoring. Once we were debt-free, my husband and I started to save money as our New Year’s Resolution.

We tracked every penny we spent in a nice little excel spread sheet. Eventually our drive-thru breakfast and Chinese take-out habits had stopped and we ate a lot of pasta dinners.

In May he started a new job with a long commute. His beat-up car was getting the job done but then the summer heat really kicked in and his lack of air conditioning made the 45-minute drive on black leather seats unbearable.

At this point, we had about $10,000 saved. After much research, we decided the best thing for us was to buy used, but we didn’t want to spend all of our savings in one place. We agreed on of a budget of $6,000 total off the lot, and so the hunt began… 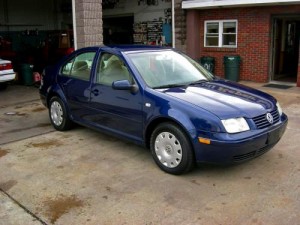 After about two dozen used car lots, half a dozen pushy salesmen and one potential buy (the car was mysteriously “sold” when we asked for the car facts), we found her in one of those free used car magazines at our grocery store.

The next day we went to take a look, even though the dealership was closed for Memorial Day weekend. Our little gem was in a packed lot outside of an auto body shop and boy, she was a beauty. A blue 2002 Volkswagen Jetta with 70,000 miles.  Her price tag: $6,000.

After a week of bargaining, we got her for $6,000 including taxes, fees and we even got them to throw in a 90-day warranty.

I was grateful we found her. I was starting to get discouraged and our 6 grand seemed like pennies in the overwhelming world of car shopping. But we stood our ground, hit the pavement and didn’t let anyone talk us into anything we weren’t comfortable with.

Christina, 23, and Michael, 25, live in New Jersey, have been married for two years and are expecting their first child in September.