In 2009, my husband and I were becoming exhausted with our dreadfully slow desktop computer that we purchased in 2004. With that, we decided we wanted to purchase a laptop. We saved for weeks. We researched at Consumer Reports. We waited for the perfect computer for us. We faced a few temptations:

::We really wanted a Mac. A Mac would have been hundreds of dollars more than the Toshiba that we were going to purchase.

::We played around with financing a portion (if we did decide to purchase a Mac). We justified that financing a portion of the cost was worth it because a Mac was a better computer and, in the long run, would be worth it. Truth be told, we did not have (nor would we have) the remaining balance to pay off what we would finance. It would make much more sense to put that extra money toward other things.

My husband ultimately made the decision to purchase the Toshiba and pay in cash. To my shame, I sometimes struggle with following him as I enjoy having what everyone else seems to have.

By supporting him in this decision, however, we experienced the freedom of knowing that we didn’t owe one single penny on that computer. This especially helped when my 5 year old decided the computer needed a shower. Could you have imagined if we were still making payments on a useless computer? Funny thing is, we purchased the exact same Toshiba because we loved it so much. 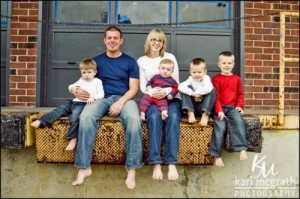