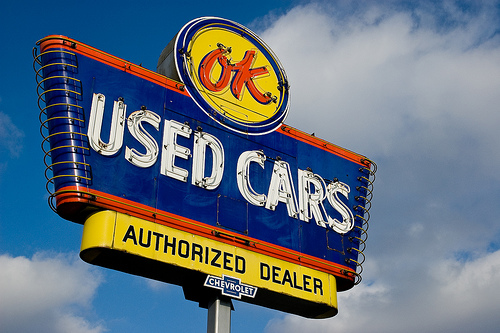 My husband and I were scratching our heads over this. Programmed into their car? Their realtor looked at us like we were possibly from the Dark Ages and said, “Yes, my car has three buttons — one for each garage door — you just program it to each garage door and then push the button to open your garage door.”

Apparently, yes. And as is also apparent, we know nothing about newer cars.

As we were chuckling over this while driving around town yesterday in Old Blue Van — our beloved van that has been miraculously hanging on by a thread for over two years! — we got to talking about how much money we’ve saved over the years by buying used vehicles and keeping them running until they’ve lost all life.

You know what the best thing about used and paid-for cars is? They might not be beautiful and luxurious, but they don’t come with a big car payment you have to lug around and pay every month.

How Much We’ve Saved By Not Having a Car Payment

Just for fun, I added up an approximate amount of money we’ve saved over the course of our marriage as a result of driving used cars.

$72,000! And that’s not even factoring in the interest you could earn if you invested that money.

Of course, these numbers are just a hypothetical and obviously, they would be inflated for many people. However, no matter the case, I would argue that you’re always going to save a fair amount by driving used and paid-for cars.

Not only does driving used vehicles mean you don’t have a car payment, it also means you usually have some funny vehicle stories to share as a result of driving clunkers! Like the time we were on our way home and Old Blue Van started smoking pretty significantly out the hood. We pulled over and my Mama Bear instinct kicked into gear and I got my babies out quicker than I knew was possible because all I could imagine was that it was going to blow up.

It didn’t. And somehow we resurrected it, yet again, and it’s driven for another two years — without another smoking incident.

Yes, there are lots of great reasons to drive used and paid-for cars. Which is why I loved Amy’s post today:

When our 2001 mini-van recently rolled over 130,000 miles, I decided to ask my Facebook Fans if I was the only “weirdo” happy to drive an older, high-mileage, paid for vehicle.  Turns out… I’ve got company!

A few commenters {ahem} even insinuated that my van was “practically new.”  Ha!

I’m fully convinced that one easy way to save big money is to purchase used vehicles (with cash) and drive them as long as possible.

And yes, I was one of the commentors who had to rib her about a 2001 van being “new.” Because seriously? Only 130,000 miles? That baby’s got a long life left — at least according to our car standards. 🙂

Please note: I’m not advocating that everyone drive unsafe, gas-guzzling, money pit cars whose doors are falling off. If you can afford it, I’m all for getting good quality used cars — something we’re hoping to save up for in the not-too-distant future. In the mean time, though, my husband’s still driving Old Blue Van.