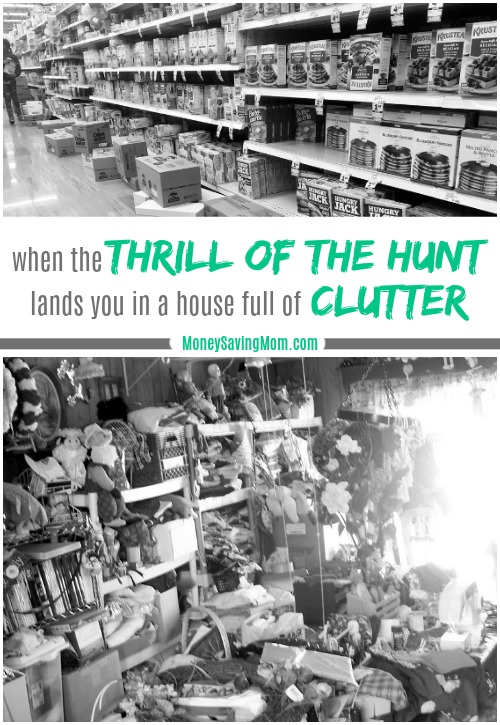 Do you love getting great deals? I do!

I’ve always been a frugal person. I was raised in a home where I was taught to budget and manage money well at a young age, and I’ve continued to hone my skills over the years.

It’s a running joke with my family that when anyone gets a great deal, they talk about how proud I will be. And I am! I don’t like wasting money nor do I like hearing when other people have spent too much on something.

The Thrill Of The Hunt

It’s thrilling when I can combine sales and coupons to spend as little as possible.

I once went to Kohls and bought 3 pairs of jeans and another pair of pants for a grand total of $1!

In case you’re wondering how, they were all 90% off combined with a coupon and a $10 gift card for it being my birthday month… and yes, I saved that receipt like it was a trophy.

While I still enjoy the thrill of the hunt and pride myself on finding deals, I realized these deals came at a cost.

I’d buy things I didn’t truly love or even want sometimes because they were a good deal. This was the first way I started to accumulate clutter.

The second way was from my creative endeavors. Over the years, I’ve tried a few different things including photography, sewing baby blanket sets, and furniture and thrift store finds flipping. Each of those came with a slew of supplies. I got everything on sale or even free.

In the end, it all became a stockpile of clutter in my home — to the point where I was no longer able to park even 1 car in our 3 car garage. Yikes!

Ironically, as I was stockpiling, I began reading books about decluttering my home and life. I had gotten to a point where I was so weighed down by the stuff that I knew things needed to change.

This journey brought me to my work now, which is as a professional declutterer and writer.

I learned a lot going through the process of decluttering my home, and while I still hold onto my deal-finding ways tightly, I’ve learned to be more mindful in what I purchase.

Before buying anything, I ask myself these 5 questions:

It’s so tempting to buy something because it’s a great deal. There’s often scarcity with the product being on sale for a limited time or with limited quantities. and I don’t make the best decisions when I feel stressed.

If it’s something I already planned to buy then yes, I’ll snatch up that great deal. If not, I choose not to buy on impulse anymore. That landed me in a house full of clutter and I don’t want to repeat that mistake.

Do you ever go shopping for a specific item and end up settling for something that wasn’t quite right because it was the closest thing you could find? For me, that always ended with money wasted and an item that became clutter.

I’m quite opinionated so if I don’t love something, I don’t want it. I don’t want to wear clothes that almost fit. There’s nothing more annoying than having to constantly adjust clothing. Don’t settle for good enough.

3. Will we be able to use this before it goes bad?

I ask this question primarily for food, but it works for anything that can expire. It’s awesome to get great deals on produce. It’s less awesome when that deal is rotting in your fridge a week later.

Be realistic about what you can use in the amount of time you have before it will go bad. Some things can be frozen and other things can’t. Be wise so that you aren’t wasteful.

4. Do I have the space to store this?

Along with using it before it goes bad, don’t intend to freeze a ton of meat if you have a tiny freezer. Know your space limitations. This can happen for things that don’t expire as well.

You know it’s turning into a problem when you’ve installed racks in your bedroom to store your toilet paper overstock because you found such a great deal. If you ever watched that extreme couponing show, you know what I’m talking about.

When shopping locally, consider the cost of gas and your time.

Yesterday I bought some applesauce pouches that were on clearance. I briefly considered driving to additional locations to buy more, but realized it wasn’t worth the cost in gas or my time.

The things we own don’t just cost us money. Once you bring something into your home it takes your time and energy to clean, maintain, and store it.

If you’re feeling burdened by your home and are suffocating underneath the clutter, it’s costing you breathing room and your peace. In trying to find my balance between simplicity and frugality, I started shopping less and being much more intentional with my choices.

I will always be a deal hunter, but I’m more thoughtful in what I buy so that the thrill of the hunt will never again land me in a house full of clutter.

Julianna Poplin is a wife, mom, professional declutter, and writer at The Simplicity Habit. She writes to encourage moms who want to declutter and simplify their homes and lives.