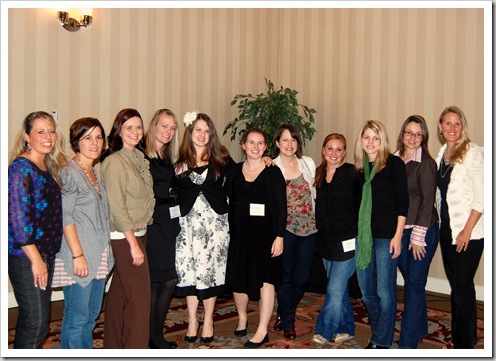 Left to Right: Courtney, Kristen, Kimba, Alyssa, Jessica, Dana, Melissa, Angie, me, Sarah, Jen — I enjoyed all the speakers so much but I especially loved getting to know Angie and Melissa. And what’s amazing is that they make me look tall, which is something that rarely happens seeing as I’m 5’4″! {Photo by QuatroMama}

After all of our flight complications, we finally made it to The Relevant Conference location on Thursday evening just 15 minutes before I was supposed to be in the ballroom for the Speaker’s Round Table Dinner. I was still in my dirty-diaper-blowout-soaked clothes, so we lugged the suitcases up to our room as quickly as possible and then I changed into the outfit I was planning to wear.

I had spent money (well, actually a Groupon!) and had my sweater and skirt dry cleaned for the occasion, seeing as I didn’t want to distract everyone while I was speaking with my wrinkled rayon black skirt (because I’m usually too cheap to dry clean it!). When I went to put the sweater on, I realized the dry cleaners had pressed the collar wrong so it stuck out all funky. And I do mean funky.

So, I dug through my suitcase and put together a Plan B outfit in the three minutes I still had left. (I almost put my skirt on inside-out in all the commotion; wouldn’t that just be like me to look down when I’m up on stage and realize I have this big white tag sticking out on the side because my skirt was on inside-out?!).

With the one minute left, Jesse and I prayed together and then I bounded downstairs, laptop in hand, praying all the way down that God would calm my nerves.

I got into the ballroom and dinner was already just starting, but I had to meet with the tech guy for him to check my laptop to make sure the adapter cord would work and allow my slides to show up. While I was hashing out details with him, Myra came up out of nowhere, hugged me and told me she was praying for me.

She had no idea how much that meant to me right then. God just flooded me with peace again and I went to sit down at my assigned table.

Dinner was spent mingling with the attendees (the speakers had assigned tables and we rotated them every 15 minutes) and God just helped me to keep my calm and be able to focus on these amazing women and their incredible stories. I even managed to sneak in some bites of salad and chicken, too!

All too soon, dinner was almost over with, and I stole away to the restroom to try and compose myself and pray for two minutes in the bathroom stall (I can’t believe I just confessed that on my blog!).

A week ago, I’d planned to get at least two really good nights of sleep before the conference started. Instead, I was running on a total of about seven hours of sleep in a 48-hour period because I’d been up with Silas.

A week ago, I’d envisioned I would spend the last three days before the conference going over my speech with a fine-toothed comb and doing a complete run-through of it with the slides at least five times. Instead, I’d only gone over the entire speech with the slides one time — and that was late the night before and peppered with interruption after interruption.

We’d booked our flights planning to get into the hotel in the early afternoon so that I’d have time to decompress, pray and prepare. But instead, I barely arrived at the hotel in time to change my clothes.

If there was ever a time when I needed God to step in and undertake for me, it was now. I was about to go up and speak for an hour in front of 240 women — many of whom were women I’d long admired from their blogs — and I was exhausted and terrified.

Back in the ballroom, I discovered my computer wouldn’t work with adapter cable and I’d need to run the slides on another computer. By now, it felt like we were about on Plan W, having long ago tossed out my well-laid out Plan A, B and C.

We finally got the slides to pull up on the screen on the borrowed laptop and then the live-streaming wouldn’t work. We were delayed by another ten minutes or so while trying to get that to pull up (all the while I was secretly hoping it maybe was in God’s plan that my talk wasn’t going to be live-streamed!).

Stephanie came over — out of the blue — and asked if she could pray for me. I remember her praying specifically that I wouldn’t be nervous while at that very moment my knees were knocking together!

Then I was introduced and walked up onto the stage — wondering what on earth the next hour might hold and pleading with God to please guide my mouth and give me peace.

As soon as I started speaking, He did just that.

I’m not sure what all I said, but I felt His presence streaming through every ounce of my body giving me courage, calmness and clarity.

As soon as my talk was over, the most amazing thing happened: People started coming up to me — many with tears in their eyes — telling me of their struggles… thanking me profusely for sharing… talking about how God used it in their lives and convicted them of areas they needed to change.

And I knew that God had shined through in a powerful way. He had taken a weak, inadequate, unprepared person who’d never given a talk longer than ten minutes in her life and He’d used her to impact lives for the glory of God.

It felt humbling and amazing to be His conduit.

The rest of the conference was just incredible. It’s really impossible to put into words, but the best I can describe it is that God moved in powerful ways — healing wounded hearts, inspiring women to do great things for God, encouraging women to recommit themselves to put first things first, changing and transforming lives.

I met so many amazing women. There were many tears shed. Much laughter shared.

And there was authenticity and real-ness and brokenness.

No one was trying to be someone they weren’t. We were ourselves — and we were accepted and loved just as we were.

It was a beautiful thing to be apart of. 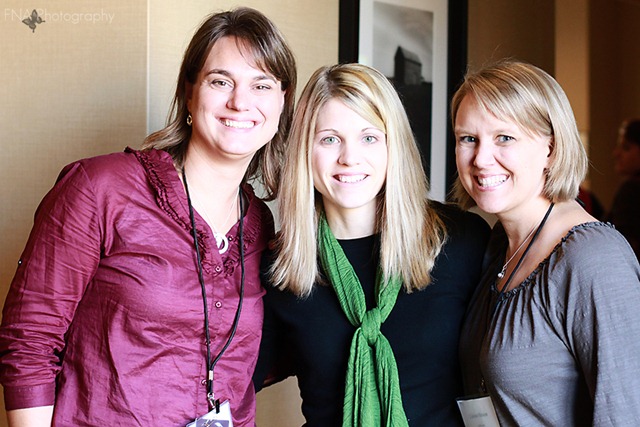 Jolanthe from Homeschool Creations, me and Carisa from 1+1+1 = 1 — two women whom I’ve been so blessed and inspired by as a brand-new homeschool mom. They are so fun in real-life that I could have spent all week long with them and we would have never run out of things to talk about! {Photo by Jill from FNA Photography}

For those who might be interested: You can read more thoughts and take-aways from the conference by other bloggers at The Relevant Conference site or at 4Tunate.net.