Home » Crystal Paine » Super Savings Saturday: You gotta see this to believe this! 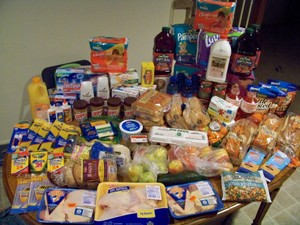 (Click on picture to enlarge for the full effect–the entire table was stuffed with food and household products! Please especially take note of the BOX of Pampers–100 diapers in all!)

Total spent out of pocket?

After almost three weeks of little-to-no shopping–thanks to a well-stocked pantry, fairly-dismal sales, and my attentions and energies being focused elsewhere–I guess I made up for it this week.

Since the deals usually linger at Target and Wal-Mart for a month or more and they are a bit more of a drive, I save my coupons and just hit both stores once every 4-6 weeks. This was the week to hit both of them and hit them I did!

At Target, my total before coupons was $83. After coupons, it was $38. And then I paid with gift cards I’d earned free from referring a few folks to eBates. So I spent $0.00 out of pocket!

Between the clearanced box of diapers, another pack of diapers I bought, and the 2 mega packs of refill wipes, we should have enough diapers and wipes to last us for six weeks!

At Wal-Mart, I spent $8.61–I got free Schick razors (used $2/1 coupon from recent insert making them free), bought more Muir Glen tomatoes, used my three last $3/1 Planter’s coupons to get free Kettle roasted peanuts by buying Kool-Aid (anyone want some? We don’t get near Kool-Aid!), bought Luvs diapers for $2.47 (used $5/1 coupon), got one package of Yo-Plus yogurt for $1.08 after coupon, and 2 packages of Kotex for free (used $1/1 coupons).

Next stop was Hy-Vee where I spent around $13.56 and got lots of peaches and pears, frozen veggies, cottage cheese, orange juice, free Huggies CleanTeam wipes (the small packs are priced at $0.97, used $3/2 coupon and got the overage!), and 3 packages of chicken (two packages were manager’s special SmartChicken thighs on special for $2 each!).

We are now well-stocked for the next two weeks and I’ll probably only have to make a small trip to the store for more produce and milk and the best deals next week. Yay!

What is so exciting to me about getting all of these great deals is that these were in direct answer to prayer. I prayed specifically before going into each store and I also prayed for God to give the girls grace to be cheerful and obedient. I never expected to make it to all of those stores with the girls by myself in one afternoon (I was planning to split it up over two days and stop when they started getting tired–but they never reached that point so we just kept going!). Nor did I expect to get such great deals.

God is always faithful to do "exceeding abundantly above all that I could ask or think": the girls ended up having a blast with me (there was almost no complaining at all!) and we snagged quite a few more deals than I had planned on. God is good.

—————–
How’d you do this week? Post
about the deals and bargains you were able to snag this week on your
blog (with pictures, if possible!) and then come back here and leave
your link below.