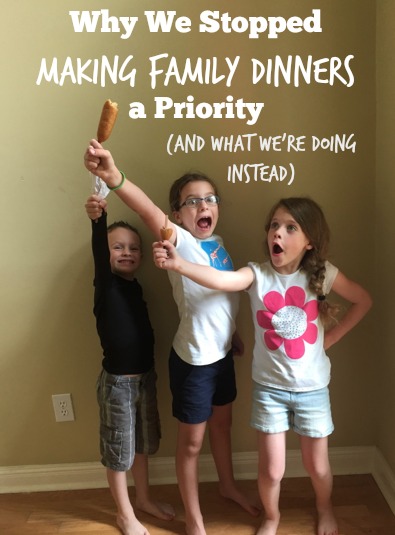 For years, I was under the impression that, “Good families eat dinner together almost every single night.”

I’m not sure where it came from, but I certainly believed it. And every week that went by where we missed multiple nights of eating together, I would feel guilt.

I would feel guilt that I didn’t seem to have my act together enough to make family dinners a priority. I had guilt over the fact that we had made commitments in the evenings (even though they were good commitments and things that we loved and that were adding to our family in a positive way).

We’d sometimes have weeks where we were really good about having family dinners, but then there’d be other seasons where it felt like most nights we weren’t eating around the table together because life happened. 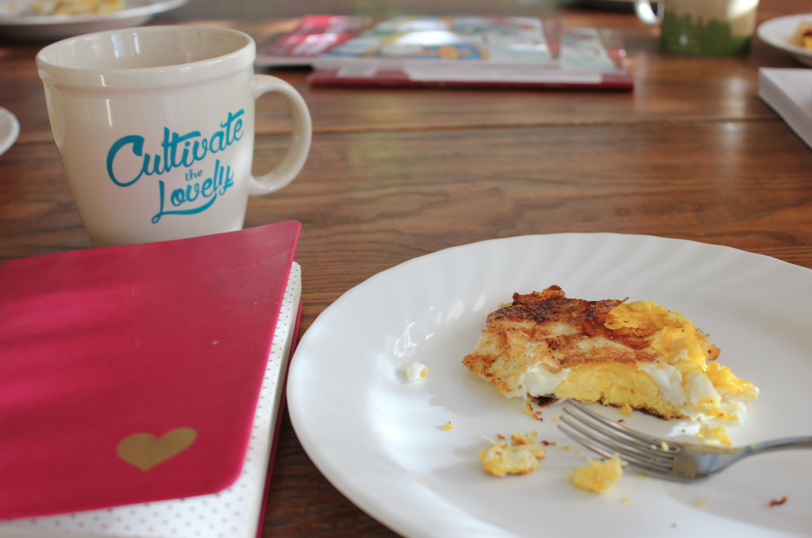 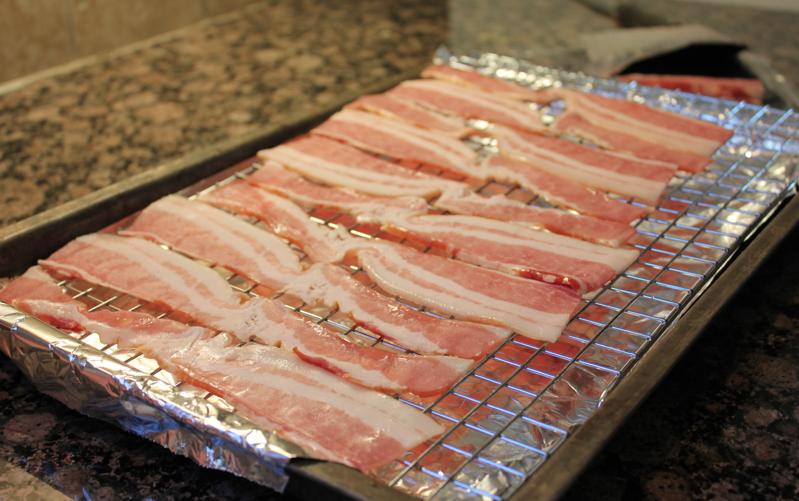 I would beat myself up about it. I’d come up with unrealistic plans to make it more of a priority. I’d consider that maybe we should just stop all evening commitments altogether.

Most of all, I just felt angst over it and I couldn’t seem to come up with a realistic fix. But I also couldn’t allow myself to just let it go and convince myself that it was okay for us to just not have regular family dinners.

Finally, after a lot of thought and talking with my husband, we came up with a unique and outside-the-box plan. We’ve followed this since the beginning of 2016 and it’s been one of the best changes ever in our family. 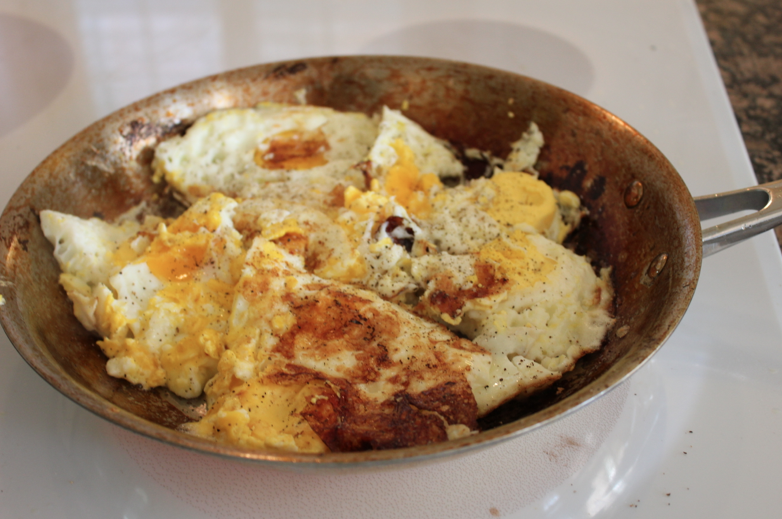 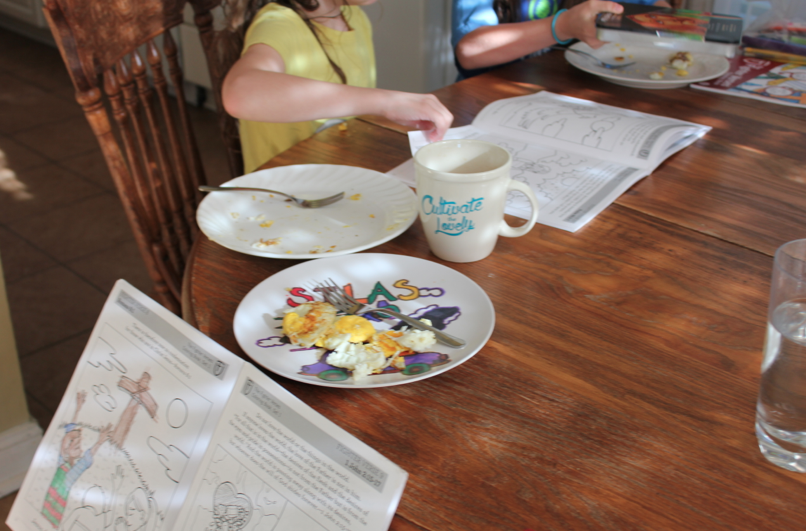 What We’re Doing Instead of Family Dinners

At the beginning of 2016, my husband and I sat down and reviewed our goals for the year and talked about areas we wanted to improve in. As we thought over the past year and discussed our hopes, dreams, and goals for2016, one goal both of us realized we wanted to make a big priority for 2016 was having breakfast together around the table as a family every morning.

This was one of those things that we’d always planned to do. In fact, we would often commit to it and do it for a few days, but we always fizzled out. Life happened, mornings would be hectic, and that time together talking and being together as a family would fall by the wayside.

We both committed to make 2016 the year that we actually made family breakfasts together not only a priority, but a habit… something we did without contemplating whether or not we had time, or whether or not we should do it. We wanted it to become as much a part of our mornings as getting out of bed and getting dressed. 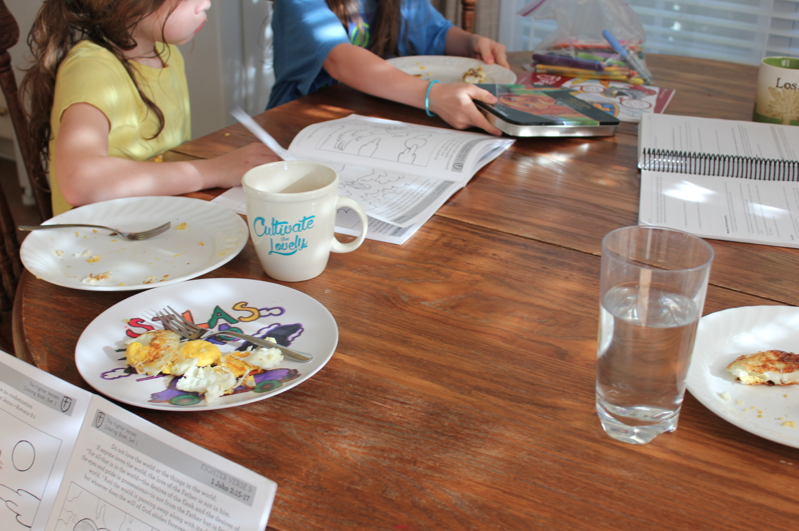 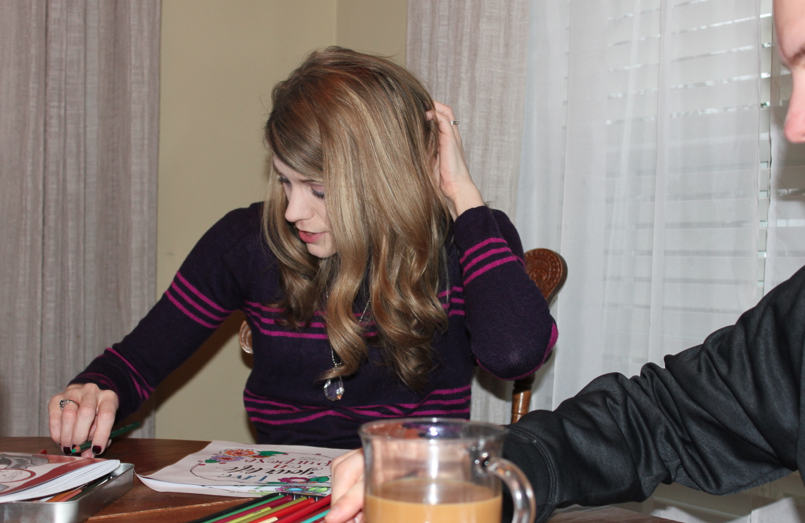 How It Works For Us

We get the kids up around 7 a.m. and they get dressed, make their beds, clean up their room, and do their morning chores. I’ve usually gotten up before the kids and already had my time in God’s Word, so while the kids are getting ready for the day, I usually check in online — checking on emails, posts, talking with my team, and taking care of anything that needs to be taken care of before I log off to spend the morning with my family. Around 7:30 a.m., I head upstairs to take a shower, make our bed, and get dressed and ready for the day.

During this time, Jesse usually spends time in God’s Word and a little time online, and then heads to the kitchen to make a hot breakfast breakfast. Our goal is to have a hot breakfast every single morning. I’m spoiled in the fact that Jesse makes breakfast for us every morning. (Yes, for real!)

When we say “hot breakfast”, though, that term is a little loose. 🙂 We stick to simple and quick breakfast ideas — and we usually just rotate between a few. We either have bacon & eggs, oatmeal, or Cream of Wheat. This makes prep, planning, and clean up very simple. And we all really like almost all three things (I’m not much of an oatmeal person, but everyone else loves it!) 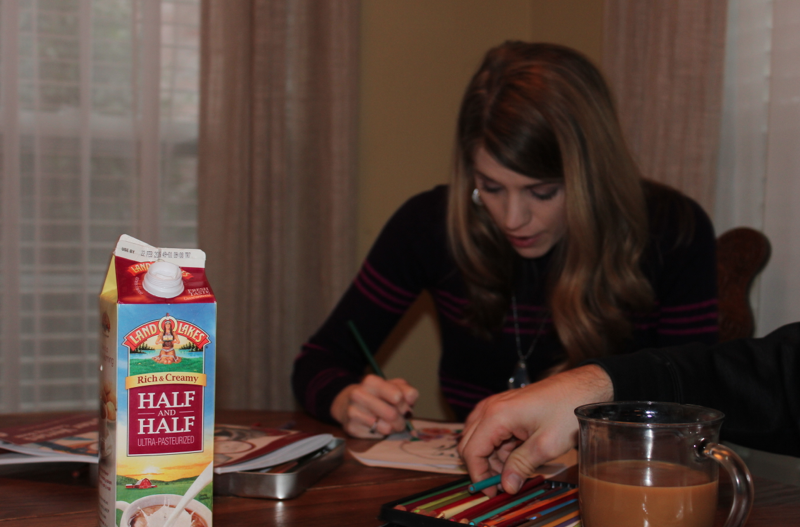 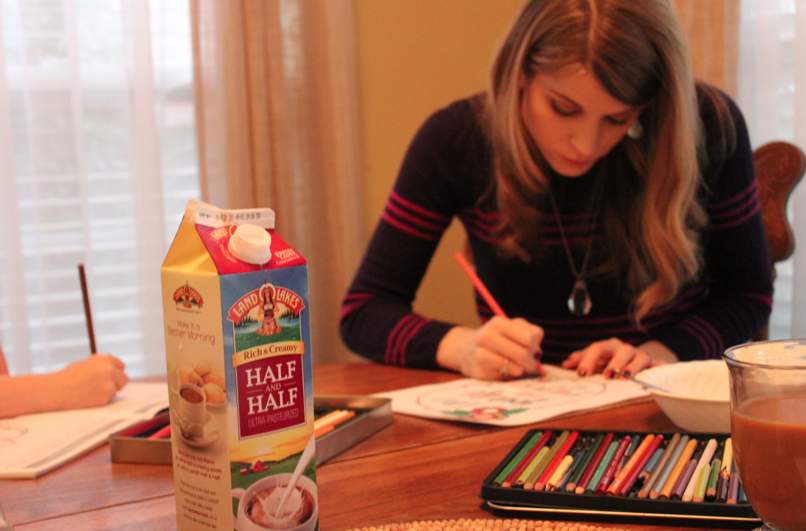 We usually sit down at the table together around 8 a.m. and we pray and eat breakfast and then Jesse reads to us from The Fighter Verses study and we have a discussion about it.

While he reads, I usually hand-letter and/or color and the kids color in their Fighter Verses coloring books. We often get involved in pretty deep discussions as a result of what we’re talking about. Jesse’s really good at asking questions that make the kids (and me!) think and that lead to great conversation.

Sometimes, we get way off track and end up sharing funny stories or tidbits from our childhood or elsewhere, but it’s always a time that we love and look forward to.

Family Breakfasts have become our “Family Dinner”… as in, it’s when we gather around the table, hang out, talk, and share our hearts. Sometimes we have disagreements. Sometimes, we have to deal with bad attitudes. But we treasure this time.

And even if we don’t end up having dinner together around the table that evening because of other commitments, we’ve already spent time around the table together. So it’s become such a perfect solution for us at this season of our lives. 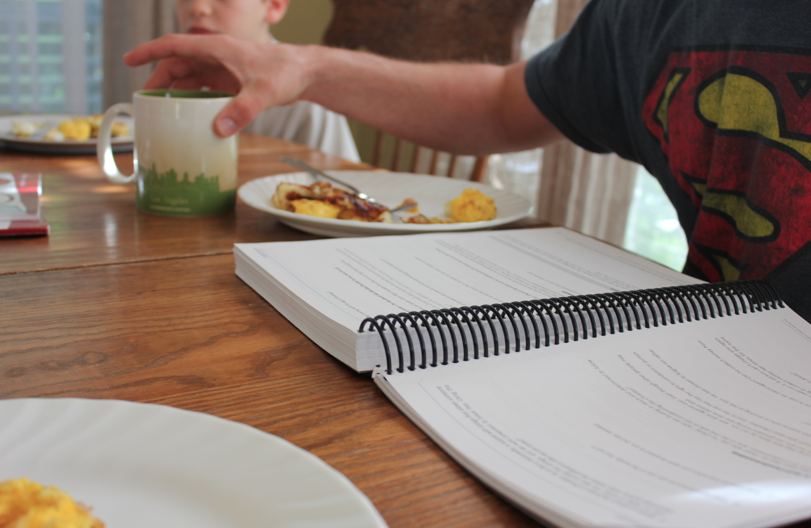 Resources We Are Using: 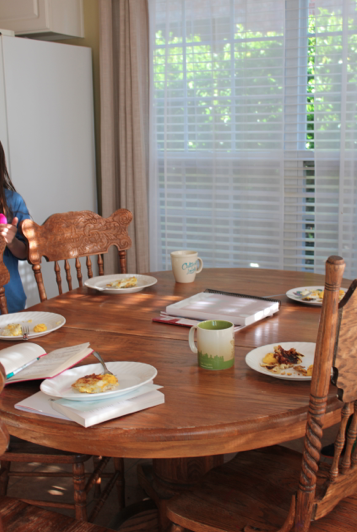 Do you have tips for how to make meals as a family more of a priority? I’d love hear — tell us in the comments!