How I Slashed My Monthly Vegetable Bill By 53% 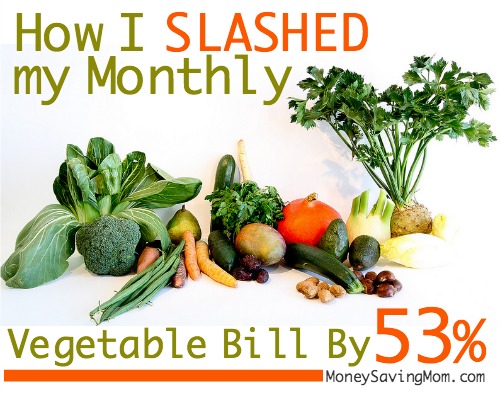 I’ve been vegan for over a year now. When I first made the switch to a plant-based diet, I spent an enormous amount of money on vegetables. Since I have them with pretty much every meal, I was buying them in abundance, and my bank account was showing that.

I started doing a bit of research and experiments to see if I could save a serious amount of money on my produce – and I did! In fact, last month I gave myself a budget of $30 per week for my produce purchases (at that point I was spending about $60), and came in under budget by $6!

Here’s what I did to save money on vegetables:

My local grocery store has a discounted produce rack, and every time I went shopping, I would check it out for veggies that I could use. I often walked away with peppers, eggplant, zucchini and tomatoes (among other things) for 50% off or more!

Some vegetables had to be used right away, some would last a few days, and some of them I would stick in the freezer for later use.

Farmer’s markets were a lifesaver for me last month! I went every weekend, and I always scored a ton of great deals when I was there.

I would usually show up about 30 minutes before closing time, and would ask the vendors for rock-bottom prices on their remaining vegetables. Most of them accepted!

One of the best deals I scored at the farmer’s market was a 10 pound box of bell peppers for just $5! I brought them home, washed them, cut them up, and popped them in the freezer. Now I have months’ worth of peppers in the freezer for soups, chili, and more!

If you don’t have a farmer’s market nearby, check to see if there are any farms in your area, and if they offer “pick your own” vegetables.

Many farms allow you to pick your own potatoes, tomatoes, fruits and more – for a lot less cash than what you’d pay at a grocery store.

Plus, a trip to the farm is a fun family outing!

One of the biggest things I did to lower my costs on veggies was to stop buying things I wanted, and instead only purchased the things that were in season.

When produce is in season, it’s not only much cheaper, but it also tastes way better.

Visit Fruits & Veggies More Matters to learn all about in-season produce and when you buy your favorite vegetables (and fruit).

These are the ways that I was able to cut my bill on veggies by 53%. Since this experiment was so successful, I’ve decided I’m going to continue doing what I’ve been doing.

There are always ways to save on foods that make up a big part of your diet, no matter what they are!

What are some ways that you’ve been able to save money on vegetables?

I’m Cassie – vegan food lover, money-saver, and blogger. I live in Vaughan, Ontario, right near the big city of Toronto, with my husband, our 2 kids, 3 cats, and a dog that thinks he’s a cat, too. I love to cook and share delicious vegan food with everyone I know.