Home » LITE Feed (non-deal) Posts » Reader testimonial: My kids are learning to save up and pay cash for things!

Testimonial from Heather of CreativeFamilyMoments

Someone has been watching me very closely.

He is a logical fellow and very careful with his money. But since he’s only 10 years old, this surprises me a bit. On occasion, it’s also made me blush.

For instance, in Target, he watched as the checker circled the ‘You Saved’ amount. He turned to the line behind me and said, “Wow! It really DOES pay to use coupons. That’s a lot of money saved!”

He has a huge wish list like most kiddos, but instead of spending the money, he asks me to check the library and put new books or DS video games on hold or on request. If that’s not an option, he usually goes without instead of begging. He knows we’re on a tight budget and begging doesn’t help.

What I wasn’t anticipating, was his influence on his sisters. My youngest is always asking — she does it creatively — by slipping notes like this under my door: 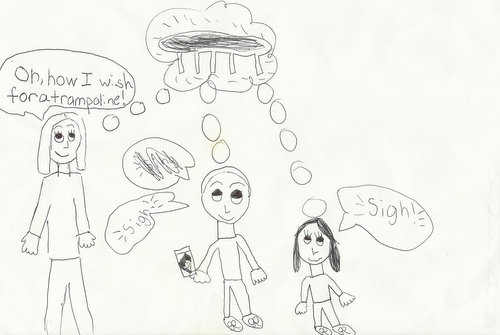 I wasn’t worried because there’s no room for a trampoline in the budget. However, my son suddenly took an interest in perusing the Sunday advertising sections.Weeks went by without him saying a word until he spotted a deal on a trampoline and enclosure.

I put two and two together as I overheard him ask his older and younger sister to join him in a secret conversation. Before I knew it, they had pooled their money and found a steal of a deal on a trampoline! 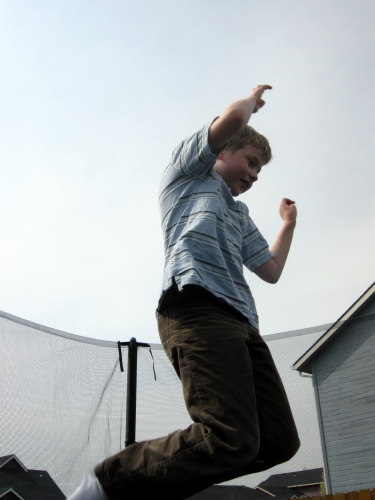 Eight months later, our Nintendo Wii broke. Since it had been given as a gift in the first place, there was no plan of replacing it until my son started asking around on the playground and heard about a place that sold refurbished game stations. Again, he asked for his sisters to join him in a discussion.

So far, my kids have paid cash for a trampoline, a Wii game station with remotes, art supplies, and more.

Seeing such great results has made an impact on my daughters. I notice my eldest daughter looking at outfits at the store and then finding something similar at a consignment shop. My youngest daughter, prone to spending her money the moment she has it, has started requesting things from the library.

There’s just one problem, they’re all working hard and saving…

… and guess who just slipped a picture of a kitty under my door!

Heather Humrichouse loves to live life purposely by finding the celebratory in the ordinary. She blogs at CreativeFamilyMoments.com