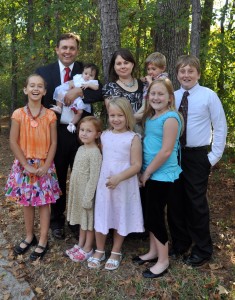 Tiffany at My Litter emailed in the following testimonial that I thought many of you would enjoy reading:

I am surprised to find myself writing this post. We have always been a “cash” family and know the benefits, but you never know when having that extra cash can really save a situation.

My husband and I have lived in the same “starter” home for the past 12 years. When we moved in, we had one child and tons of space. Now we have seven children and no space!

We had talked about moving, but liked our small house payment and with the economy the way it is, we were nervous about making a decision like that. However, when the opportunity came to move two miles away into a house twice the size for a very reasonable price, we decided to jump at the opportunity.

Things fell into place perfectly. Our old home sold quickly and we were going to be able to lease it back from the new owners until our new house was ready. Things were too good to be true.

At closing the new owners decided they wanted did not want to lease us back our old home, we would have to move out in two weeks and find temporary housing for three months until we could move into our new house.

I immediately began looking for somewhere to live, but didn’t expect to have any trouble. I was wrong.

No one wants to do a short term lease for three months. They would much rather wait for that 12-month contract and not miss the chance to have someone lease longer.

I started looking for apartments, only to find that our family was too large. Fire code prohibited us from having anything smaller than a four- bedroom apartment, and there was not a single four-bedroom apt. within 15 miles of where we were lived.

We had two days until we had to be out of our old house and still did not have anywhere to live. We moved everything we owned into storage and decided that we would have to get two extended stay hotel rooms (that connected) for the next three months.

I was sick to think of how stressful that would be with nowhere for the kids to play and the difficulty of making meals. My husband and I decided to say another prayer that someone would consider a three-month lease to a family with seven kids and a dog!

The next morning as we were moving the final large items into storage, we got a phone call from a friend who had a neighbor with a home that he would consider leasing. But not realizing that we only wanted three months he quickly tried to back out.

My husband felt impressed to ask him once again if he would consider it if we paid him cash for the three months upfront. To our surprise, he said yes. I cried tears of joy all the way to the bank–something that I am sure will never happen again when withdrawing money!

The almost $6000 to keep my family together and not in a hotel for three months was worth it. That money would have been spent on a mortgage payment over that period of time, but had we not had the cash saved and only been able to pay a month at a time we would not have had that option.

It can be difficult to be frugal, to clip coupons, and put things you want on hold, but this situation reconfirmed to my husband and I that paying cash or having the ability to do so is the way to go.

Tiffany and her husband Paul are the parents to 7 fabulous kids who all have killer senses of humor, which makes their lives just that much more fun, crazy and wonderful! Paul works full time in sales, and when he is not coaching the kids sports, is a blogger at I Heart The Mart. Tiffany is the Director at a private Christian preschool and in her spare time (between the hours of 1am and 3am) she blogs at My Litter.