Home » LITE Feed (non-deal) Posts » Q&A: How did you get over your fear of public speaking? 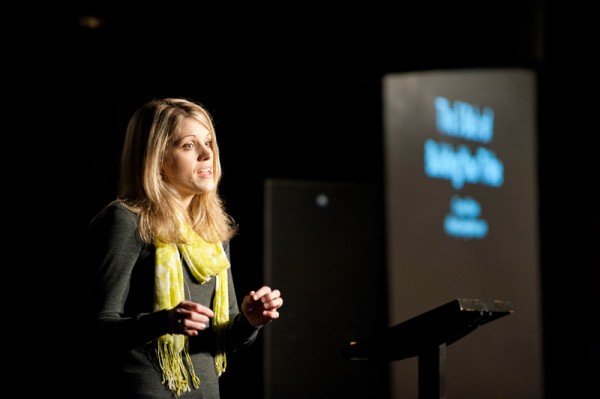 Did you go to a class or group to learn how to speak well in public? I am trying to start my own business and need to speak to advertise at different groups and I get violently ill. Not a good trait for an entrepreneur! I’ve attended your seminars at conventions and wonder how you started with public speaking. -Lisa

Hi, Lisa! Can I just encourage you that I know almost exactly how you feel?

In fact, it’s really quite comical that I (of all people!) am answering a question on public speaking. You see, ten or twelve years ago, public speaking would have been first on my list of “Things I Dread With a Vengeance”.

The handful of times I had to do a tiny little bit of public speaking in the first 21 years of my life, I was absolutely paralyzed with fear ahead of time. I’d be sick to my stomach. Not able to sleep. Not able to think about much else — for weeks before each little speaking gig! And each of those handful of times I got up to give my little speech, it was very poorly executed and I was visibly shaken.

After I got married, I decided I’d avoid public speaking if at all possible since I loathed it so much. This stance worked pretty well for about seven years. And I figured that, as it stood, I was on track to being able to pretty much always avoid having to make a fool of myself in front of a crowd again.

Facing My Most Dreaded Fear

But that all changed about three and a half years ago. I was asked to speak on a panel at a blogging conference. I love blogging and talking about marketing and blog strategy, so the more I thought about it, the more I realized that I didn’t think a panel would be all that bad. So I said “yes” — even though it was outside my comfort zone.

Three months later, I found I was slated for the panel plus the opening night keynote session!!! Talk about having a panic attack.

I’d never given more than a five-minute talk before, so I’m not sure what possessed me to go through with the keynote. But I did it — and I’m so glad I did now, even though I read the entire talk word for word, shook the whole time, and it can rightly be classified as one of the worst speeches ever delivered.

None of that mattered when I was finished though. Because I had done it. I had faced my most dreaded fear in the face and I HAD BEATEN IT!

Maybe I’d just barely survived. But I had survived. And that gave me hope, excitement, and amazing courage. 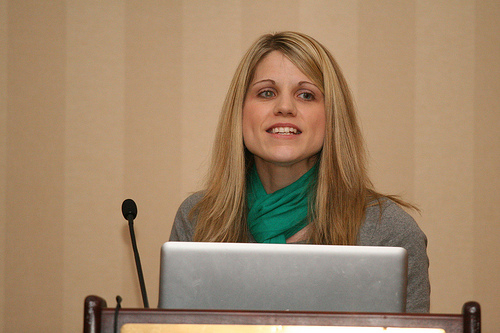 {That’s me giving my very first talk at the conference I mentioned above. I don’t think I really moved from behind the podium and I mostly gripped it for dear life the whole time!}

In addition, something crazy happened when I stepped off that platform: I realized that public speaking no longer seemed like the most awful thing in the world. In fact, there was a tiny part of me that actually enjoyed it.

As God began opening up more doors for me to speak, my husband and I both felt this was His leading… so I started slowly saying “yes” to a few opportunities. Each time, I was shaking in my boots. But each time, it got a little better and a little better. And, as the opportunities continued to come in, it fueled my desire to practice and hone the skill of public speaking.

The past three years have been a journey of growth and stretching for me. Stepping outside my comfort zone, making mistakes, and learning as I go.

I’m far from arrived and still have much to improve upon when it comes to my public speaking skills, but I actually now look forward to each opportunity and find so much joy in standing up and sharing what I’m passionate about with others. That’s downright amazing progress for a gal who used to avoid public speaking at all costs!

Here are some things I’ve learned in the past three years:

Just Do it — And Keep Doing It

This sounds ridiculously simple — and it is! — but it’s true: The best way to become a speaker is to just go out there and speak.

Accept just about every opportunity that comes your way — whether it’s speaking at the nursing home, giving a little talk to a group of children, teaching a class at the local community center, or sharing at a small women’s group. The more you can be in front of audiences practicing your material and trying new approaches, the better.

When you are first starting out as a speaker, practice more than feels necessary. I try to practice new talks from start to finish at least two to three times before delivering them. This includes using my slides, keeping my notes where I plan to keep them, and having a live audience.

Yes, you need to practice in front of a live audience of at least one or two people (preferably someone who will make you feel uncomfortable). I promise you’ll be glad you did!

Attending the She Speaks Intensive in January was one of the best things I’ve ever done as a blogger. Not only did I get to sit under amazing speakers and learn from them, but I also met Michele Cushatt (my speaking coach — more on her in a moment), got connected with Brian Scheer & Joy Groblebe (who have mentored me over the past seven months and recently became my managers — so thrilled to be working with them!), and met Ruth, Angie, Kathi, and Renee — dear, dear women who have all become close friends.

So yes, attending a speaking conference was right up there at the top of my list of Best Things I’ve Done As a Blogger! 🙂

By the way, if you’re looking for a speaking conference to attend, I’ve heard amazing things about the SCORRE conference and plan to attend it in 2014.

As I said a minute ago, I met Michele Cushatt at the She Speaks Intensive. I hired her as my speech coach shortly thereafter and she’s changed my entire approach to speech preparation.

Michele quickly taught me that I was going about things all wrong. You see, blogging and speech writing are two entirely different things — but I was trying to go about them in the same way. And that’s why it wasn’t working!

From Michele’s coaching, I’ve learned how to start with one key message I want people to leave with and how to clearly flesh that message out in a way that will resonate with my audience. She’s helped me pare down my massive lists of things I want to share in one talk and just hone in on a few major things.

The thing I love most about working with Michele is that she serves as a fantastic sounding board for me. We usually spend about an hour on the phone going over each new talk I develop. She listens to what I want to convey, challenges me on points she thinks are weak, and encourages me to dig deeper as a storyteller.

Having a speech coach has made a major difference in the quality of my speeches and it’s given me much greater confidence in my delivery. I can’t recommend a coach highly enough!

Once you’ve gotten some practice under your belt, ask a few people you trust to sit in on your talks and give you candid feedback. Liz, my road manager, sits in on every single talk I give. Because she gets to hear the same talks over and over again (bless her!), she can give me invaluable feedback each time.

We usually have a debrief at the end of every speaking engagement. She gives me honest thoughts on what parts of the talk worked well and where I can improve. Having this input has been incredibly helpful!

For more advice, I highly recommend watching Chris LoCurto’s short video on how to become a better speaker. The trick he shares here really works!

What advice and encouragement do the rest of you have for Lisa? I’d love to hear!