Punching One of My Greatest Fears In the Face 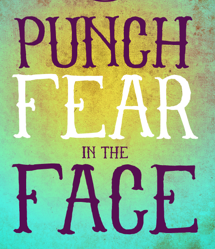 Over the last two years, I’ve faced a lot of fears head on, stepped outside my comfort zone, and experienced the shrill joy that comes from doing what I once thought was impossible.

But there was one fear lurking in a dark closet that I hoped I would never have to face again. I had shut that closet and locked up tight almost 10 years ago with no intention of ever finding the key. As far as I was concerned, it was done. Over. Past.

What was that fear you ask? The fear of playing my violin in front of an audience.

For those of you who didn’t know, long before I was a blogger, I was a violinist. I took violin lessons for many years, spent countless hours practicing, played for many different occasions and events, and taught violin for a number of years.

As long as I was playing in a group, I loved it. But get me up on a stage playing a solo or duet and I was scared sick and a nervous wreck. I can’t tell you how many times I messed up in public due to nerves nor how many opportunities I said “no” to because I was so afraid of performing.

Zipping Up My Violin Case Once and For All

When I got married, I zipped up my violin case and put it at the top of closet. I was sad to say goodbye to what was once a big part of my life, but also thrilled and relieved that I didn’t have to live in fear of my next violin performance.

Years past, babies were born, jobs changed, and the violin moved with us and got stuck at the top of a closet with each move. I pulled it out on a few occasions, but mostly it just sat there.

I Don’t Know What Got Into Me, But I Said “Yes”

A few months ago, my sister was planning her senior recital and she said that she’d love more than anything if all of her sisters could play together as part of her recital. I hadn’t touched my violin in over three years, so I don’t know what got into me, but I told her I’d do it.

Life’s been full and I didn’t think too much about it until last week as I was practicing in earnest for the recital. All of a sudden, all of those fears from the past came on with a vengeance.

I remembered those recitals I’d bombed. Those quartets I’d squeaked through and played wrong notes in.

And I started having major panic. “Why had I signed up to do this? What on earth was I thinking?”

Every time I thought about walking up on that stage and attempting to play, I got sick to my stomach and felt my chest constrict.

I Knew In My Heart I Was Supposed to Do This

I started concocting a lot of reasons why I could and should back out. I even hoped that maybe I’d get really sick so I wouldn’t be able to do it.

But I knew in my heart that I was supposed to do this. I was suppose punch this lifelong fear of mine in the face (thanks, Jon Acuff!).

That didn’t make it any easier, though.

The day of the recital, I was a ball of nerves. I couldn’t think straight. And I had to keep stopping to pray, breathe, and remind myself that “I can do all things through Christ who gives me strength.” {I even went and hid out in the bathroom twice before the recital to try and calm my nerves!}

Punching Fear in the Face

Before I knew it: the moment arrived. I went up on stage, trembling and fearful, but determined.

My hands were shaking. My heart was pounding. And I had no idea what kind of crazy squeaking might result from my violin because I was so nervous.

But, I made myself breathe, I said a quick prayer, and I told myself, “Go punch fear in the face.”

No, it wasn’t an award-winning performance, but it was the first time ever that I have made it through a performance where I was the sole violinist without making major mistakes or basically botching the piece.

It felt so, so good. And I am very happy I didn’t back out at the last minute. Because I would have missed the sheer exhilaration that comes from punching fear in the face.

P.S. I’m posting a video of the performance — not because I think my part was amazing (if you have a good ear, you’ll hear some slightly flat notes coming from my violin at times!) — but because I want to inspire you to face your own fears head on and punch ’em in the face. It feels really good. 🙂

Related: I loved this post by David Molnar on how he faced the one thing he feared most.