Our Most Memorable (and free) Christmas Gift 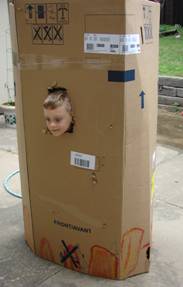 One of the most memorable Christmas gifts in our house has been huge appliance boxes. Best of all, they’re totally free!

Here’s how I’ve done this in the past.

Go to the loading dock of an appliance or furniture store. Usually if I show up back where the Dumpsters are, the workers are only too happy to get rid of whatever big boxes they have. Refrigerator, washer and dryer are all good. You could call first, but usually the person on the phone doesn’t know the box situation and it can be hard to talk to the people in the warehouse during the Christmas rush. I just show up.

“Break down” the box and put it in your van/SUV. You’ll have to flatten the box, so bring along a pair of scissors to cut any tape (and wear jeans). You might need to do this on the weekend or sometime when you don’t have the kids, since the boxes, even flattened, take up a lot of room in the car. You don’t want to lose a child’s head or anything.

Store it in a secret location. If you’ve broken the box down, it’s pretty thin so you can slip it behind something in the garage or attic.

Bring it out and set it up on Christmas Eve. Make it a box again(you might have to use some heavy-duty tape), and wrap it if you want. This is easier than it sounds. I just wrap the big rolls of wrapping paper around and tape it. Sometimes I’ve hidden a smaller gift inside the big box because I was worried the kids would be disappointed that it was empty!

After all the Christmas festivities, give the kids creative supplies (shreds of wrapping paper, markers or crayons, foil, safety scissors, tape), then ignore them and go read a book. They’ll turn the box into a spaceship, secret cave, or castle. My kids have spent days in their boxes.

Give a time limit for the box. If you’re like me, having an enormous box in the middle of your living room tends to make you a little crazy — so give clear time limits for how long the box can stay! I think last year, I said the box had to live in the backyard after Christmas Day (you could use the garage or basement if you have snow). Then, after one week, the box goes away completely.

You can either flatten it down and store it for summer or throw it away (if your kids haven’t grown emotionally attached to it like mine tend to do).

Have a blessed, creative, and very economical Christmas! (As I was working on this my kids saw the picture of “The Rocket” (their box) and they’ve requested yet another box for this year. Sigh.)

Charity Hawkins is the author of The Homeschool Experiment: a novel. She lives, writes, and wrestles boxes in Oklahoma.