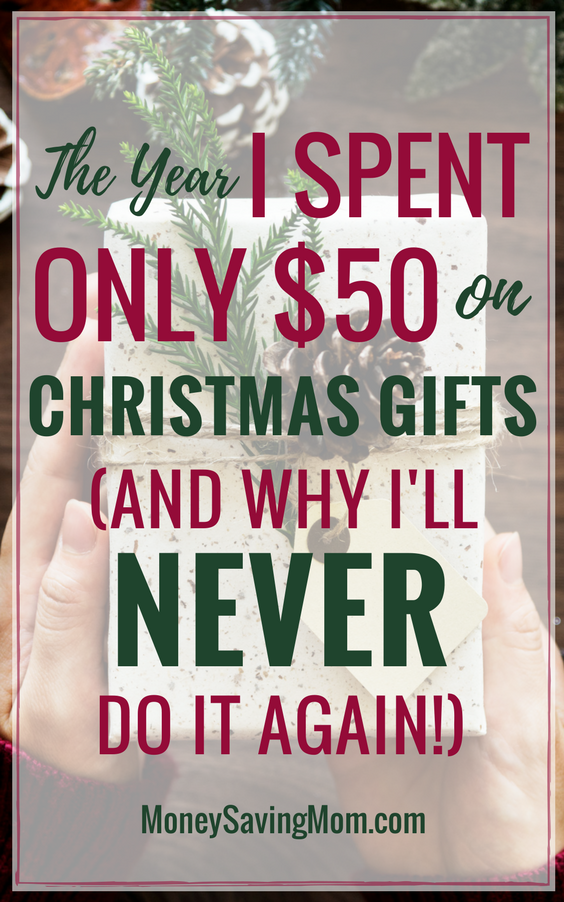 Guest post from Kaley of The Merry Little Christmas Project:

The year was 2010. My husband and I had just survived the angst of a year and half battle with unemployment. We were finally settled into a steady job that included a steady paycheck.

However, the memories of a dwindling checking account and paying for groceries with WIC checks were still fresh, and the coping mechanisms and strategies I had learned during that time had become my daily mentality.

Buy groceries without using a coupon? Never! Pay full price for anything? Not on your life! Protecting my family from spending too much money on anything had become my full-time job.

As I considered the financials of Christmas spending that year, I pinned on my “Money-Saving Ninja” badge with pride and prepared to kick overspending to the curb. I was not only going to punch debt in the face, I had money-saving moves that would win any Christmas Shopping Competition, hands down.

For a year, I prepared for the big moment. I looked for every opportunity to score deals or stock up on freebies. I tucked away gift cards and credits earned from rewards companies. I clipped coupons, mailed in rebates and entered giveaways all in the name of slashing my out-of-pocket Christmas spending.

I shopped the sales like it was my secret mission and my frugal identity depended on it. We were not going to spend one penny more than we had to on Christmas gifts. Not on my watch.

When Christmas arrived and I had crunched the numbers and the savings spreadsheets were tallied, I raised my hands in sweet victory. My goal to spend only $50 of our allocated budget on all of our Christmas shopping was not only achieved, I had actually come in under budget!

I remember the sense of accomplishment as I surveyed the LARGE pile of gifts around the tree on Christmas morning. No after-Christmas overspending guilt here, thank you very much.

But then, I remember another feeling that crept in throughout the morning – one that I was not expecting. My initial pride began to give way to some regret. When all the gifts were unwrapped and that inexpensive stash of toys had been scattered throughout the house, I realized I had just spent a whole lot of time and energy buying plain old stuff.

All of my efforts and planning and strategizing had resulted in some momentary pleasure for my kids and ultimately, another layer of clutter in our home.

I had to ask myself if all of my money-saving efforts were actually worth it?

Since that year, my attitude toward my Christmas spending has changed dramatically. Here are three lessons I learned from my $50 Christmas:

1. It’s only a deal if it brings value to our home.

Sure, maybe that game with all the little pieces is on sale at Toys R Us for a few dollars and I have a coupon that makes it cost just pennies, but will my son actually play with it more than once?

If not, the time and energy that it takes to go to the store is simply not worth it. I might snag it for a donation, but I will definitely skip putting it under the tree.

I’ve learned to pay more attention to the actual value of the gift than the perceived deal that I am snagging. (Let’s be honest – I also pay attention to the amount of those little pieces I will be stepping on after Christmas too!)

2. My main goal is no longer ‘how to spend the least’.

I will pay full price for a gift if I consider it an investment. I love to give the gift of an experience that makes time for my kids and I to spend together, whether it be a trip to the aquarium or to the movies.

I have also discovered the beauty of multi-purpose Christmas giving, like piano lessons for the music lover or a basketball class for the sports fan. Instead of simply signing my kids up for these activities, we have let them serve the purpose of a Christmas gift as well. As an added bonus, these are the gifts that keep on giving!

3. I learned that the easiest way to spend less money on Christmas is to simply buy fewer gifts.

Truth be told, it was hard for me to let go of the mentality that I owe my kids stuff at Christmas. But I’ve discovered something important by giving myself permission to simplify gift-giving and focus on only a few meaningful gifts.

The less time I spend shopping for presents, the more time I have to BE present. Those hours I used to spend deal hunting and shopping the sales are now free to be spent savoring the season with my kids. Any Christmas prep that takes more time than the joy it brings simply isn’t worth it to me.

So will I ever attempt a $50 Christmas again?

I don’t think so! This money-saving ninja is putting away her Christmas shopping nunchucks for now. But have no doubt – I still have some fancy deal-finding moves if I need to pull them out from time to time.

Kaley Ehret is wife to Wes and Mom to Griffin, Lincoln and Cade. She loves to helps women transform their Christmas through her book The Merry Little Christmas Project: Five Words that Will Transform Your Christmas and via her online community.