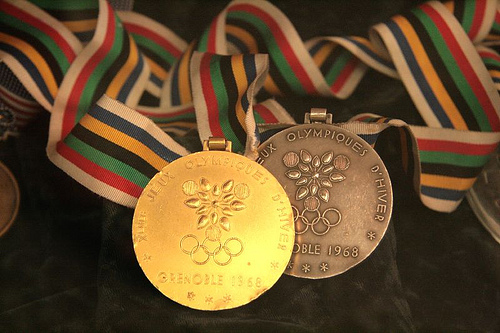 Except for something historically monumental–like the presidential elections–or, when the Olympics are on. I find the Olympics to be incredibly inspiring and interesting, unlike 99.9% of the rest of what airs on television.

As I’ve been watching the Olympics these past few days, I can’t help but notice so many financial lessons which can be gleaned from the success of these highly-trained and experienced athletes. The principles which they’ve applied to achieve athletic success can be equally as helpful when it comes to finances:

None of the Olympic athletes woke up one day last month and decided they’d compete in the Olympics. No, they’ve spent days, weeks, months, years, and even decades preparing, planning, and practicing.

I read the autobiography of Michael Phelps last year and found it fascinating that he and his coach had set exact goal times–down to the hundredth of a second–that they were aiming for him to hit in each of his Olympic races in 2008. They practiced for these times over and over and over again, and they were forefront in Phelp’s mind at the Olympic games. I have no doubt that having a clearly mapped out strategy is one prominent reason Michael Phelps brought home eight gold medals from Beijing.

If you want to be financially successful, it’s not enough to say, “I’m going to get out of debt.” Or, “I want to save to pay cash for a car.” No, you have to have a clear-cut game plan. You have to have goals and then break those down into attainable, bite-size objectives.

Olympic athletes make phenomenal sacrifices. While the rest of us are sleeping, or vegging, or shopping, or eating, they are in the gym training. They don’t live a normal life or participate in many of the social activities that most in our culture do because so much of their focus and energy must be devoted to physical training.

If you want to succeed financially, it’s also going to require sacrifice. You’ll likely have to give up some of the societal “norms” if you’re working your way out of debt or living on a beans-and-rice budget in order to save for a big purchase or stay out of debt. You might be driving an old car, wearing thrift store clothes, and clipping lots of coupons. Your friends might not understand or think you’re weird. That’s okay. In the long run, those sacrifices and your counter-cultural living will pay off with big dividends.

No athlete ever makes it to the Olympics without exerting enormous self-discipline–probably more than most of us can fathom! They push themselves through pain, injury, exhaustion, and excruciating fatigue.

They don’t give up when the going gets tough. Winners aren’t quitters.

I believe self-discipline is one of the greatest keys to financial success, as well. If you’re not willing to stick with a budget, to say “no” to what you can’t afford, and to stop living beyond your means, you’re never going to get ahead.

If you keep going, keep plodding along, keep sticking with your budget, keep pressing forward when it seems like you’re not getting any traction, you will reap the fruit of your efforts.

An Olympic medal is probably not a reality for most of us, but implementing the principles of Olympic athletes in our personal and financial lives can result in amazing success–which will hopefully be much more long-lasting than a one-time Olympic victory.