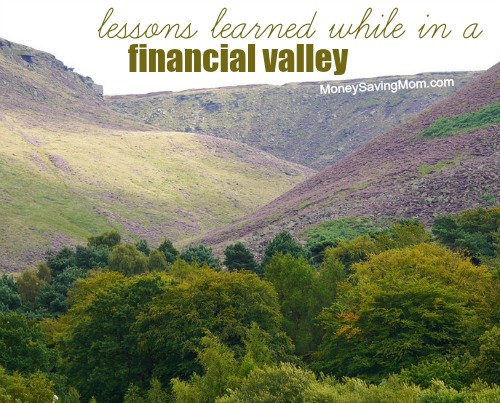 While growing up, I experienced what many would consider a privileged life filled with numerous niceties… like a 34-foot power boat, annual vacations, and a closet full of clothes and various things.

I was not given everything though. I had a regular job by the time I was in eighth grade since my parents instilled within me a strong work ethic and required me to work for some of the extras I desired. My parents also taught me the importance of budgeting and saving; but growing up with this privileged lifestyle provided me with a false sense of security and a warped idea of what I needed to feel satisfied.

As a young newlywed I was working 60 to 70 hours a week as a hairdresser while my husband made a career in retail sales. A few years later, we were able to build a house and began looking toward having children.

After being married for nearly seven years, we became parents and I reduced my work hours to just two short evenings a week. Shortly after our third child turned one, I left my job completely.

Fast forward several years to this past fall as I sat surrounded by the bins of clothing that have passed down from one to the other among our now seven children.

I opened the box of boys clothes labeled “4T/5T” and was taken aback. The tears began to flow like Niagara Falls, which soon gave way to heaving sobs. Inside the box were three neatly folded shirts on top of three neatly folded pairs of pants with one pair of pants covered in soot from the fireplace in our old house.

Those clothes were worn in 2008 and 2009 — when we could only afford to buy our four young children three pairs of pants and three shirts that were mix and match styles so it wouldn’t be obvious that we were… poor. It was during this time that we put a few measly Christmas ornaments on a large potted plant because we couldn’t afford a Christmas tree. I also had only five dollars to spend on each child that year for Christmas.

You see, it was shortly after I stopped working that the financial crisis hit, and my husband’s well paying job in retail sales was no longer well paying. Not in the least.

With an eight-year gap between my first and second sons, I hadn’t seen the clothes in this bin since 2008. Those soot-covered pants were free from stains when I put them in the box, but over time old stains have a way of seeping from the fabric and becoming new stains again.

Much like the deeply stained threads that had emerged once again, the emotions of the heart-wrenching journey we traveled rose to the surface again that day. During that time in my life, I learned to become humble and to swallow my pride, and I was forced to graciously embrace the gifts others gave us to help keep us afloat.

I wept over the nearly empty box of clothes that day last fall because that season in my life was not an easy one, but it is the season of my life that I miss the most. This sounds completely counter-intuitive, I realize, but it was the season in my life when I lived, breathed, and learned to internalize the words of Paul when he speaks in Philippians 4:12 saying, “I know what it is to be in need, and I know what it is to have plenty. I have learned the secret of being content in any and every situation, whether well fed or hungry, whether living in plenty or in want.”

As a family, we were incredibly blessed during that drought that lasted for more than two years. We didn’t lose our house, we always had food to put on the table, and we even had $1200 show up in our checking account completely out of the blue. We once opened the front door to find a gift bag with cash inside, we were given grocery money from a family member, and we had a different family member contribute toward car repairs that could no longer wait.

It was the lessons I learned during this time in my life, however, that made my heart bleed red all over the inside of the box of clothes that day. I learned what it means to truly be content even while in that valley.

Although losing our financial security felt like the rug had been pulled out from under me, I learned to find security in the faces of the little people I had been given to raise, love, and nurture. Traveling through the crisis of financial distress taught me that contentment cannot be found in what we have, but in who we are when our current securities are ripped away, leaving us completely raw and vulnerable.

I discovered that my contentment is found in the unconditional love and acceptance of my God, my husband, my children, and the loved ones who extended a helping hand along that rocky path.

I cherish that season of my life because it was then that I learned what I truly need to be satisfied, which is a lesson that could only have been grasped while in the valley.

Do you find yourself in a valley today? Do not be anxious, do not fear. The lessons you learn while in your own valley just may be the lessons you will one day treasure the most.

Jennifer is a busy, homeschooling mom of seven who enjoys keeping a home, living an active lifestyle, and loving the little and not so little people in her life. Her mission is helping other moms find contentment in living intentionally every day over at her blog, The Intentional Mom.