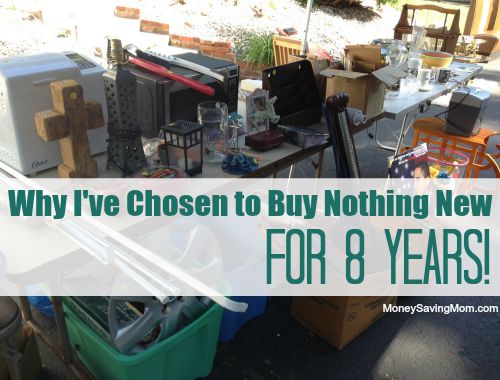 I like keeping my family’s expenditures down as much as any MoneySavingMom.com reader, so when I read an article in my local newspaper about a group of San Franciscans who’d just completed a “buy-nothing-new” year, I got excited. Their Compact allowed exceptions for a few items such as food (duh!) and safety equipment (whew!).

My husband thought I was insane to suggest such an extreme challenge, but I felt compelled. “One month,” I explained. “I’ll try not to buy anything brand new for one month.”

One month turned into two, and before I knew it I’d completed my own “buy-nothing-new” year. And when December rolled around, I saw no reason to stop. Not only had I saved an enormous amount of money, but I’d also put the brakes on the never ending influx of clutter-y stuff that makes housekeeping an un-winnable war.

I began blogging as The Non-Consumer Advocate.

It’s been eight-and-a-half years since I joined The Compact! Yes, there have been times when buying used has been a huge pain in the tuchus, but mostly it’s been a breeze.

My husband thinks that used shoes are disgusting, so he chooses that as an exception. (The Compact is very individualized, as each person decides their own exceptions.)

My exceptions include personal care items, bras, underwear, books written by friends, and harmonicas. Yes, harmonicas . . . think about it.

Here’s how my family makes only buying used a possibility:

We examine wants vs. needs.

So often the urge to buy something new is a fleeting impulse. By having to find a used version, it sets up a built-in lag time that often kills that gotta-have-it-now desire.

We repair instead of replace.

Whether it’s a piece of clothing or a broken household item, we do our best to extend our belongings’ lives.

We borrow and lend.

Whether you call it a sharing economy or simple neighborliness, there’s simply no reason for everyone to buy, store and maintain their own infrequently used household items. (C’mon folks, when was the last time both you and your neighbor needed a post-hole digger at the same time?!)

We shop to thrift stores, garage sales, and consignment shops.

Even my style conscious teenagers go to Buffalo Exchange to satisfy their trendy needs.

We give experiential gifts.

And yes, we even give used stuff as gifts.

We no longer shop as entertainment.

Strolling around the mall or even browsing a street of local shops is an unnecessary temptation.

I also think about the environmental and societal consequences of unnecessarily manufactured goods. I want no part in sweatshop labor!

Of course there have been times when buying used was impossible. But those purchases were few and far between. No one is going to be 100% perfect in anything they do, but if I can avoid 95% of new purchases, I call that a win.

For my wallet, my home, and the environment.

Katy Wolk-Stanley lives in her hometown of Portland, Oregon and both works as a labor and delivery nurse and blogs as The Non-Consumer Advocate and for The Huffington Post. She describes herself as a laundry-hanger-upper, utility bill scholar, library patron, teenage wrangler, nap enthusiast and citizen. She has featured in The NY Times, USA Today, The National Enquirer, The Happiness Project, and The Today Show.